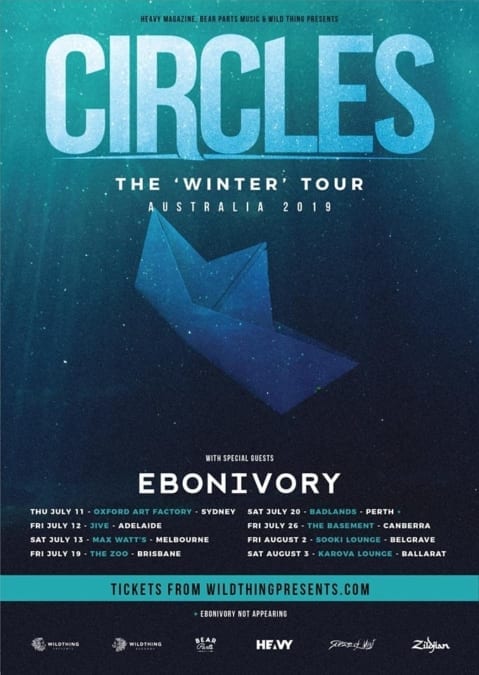 A frosty Saturday evening welcome in Melbourne saw hometown heroes Circles perform to a large and receptive crowd at Max Watts for their first headline tour. Accompanying them for this momentous and worthy evening were some of our state’s finest up and coming plus well known heavy bands, the first of which warmed up proceedings were Melbourne post-hardcore band caution:thieves.

The great thing about the night was that each band was different to the one that followed them so the energy, warmth and high tensity momentum delivered by caution:thieves to initiate proceedings was excellent. Performing songs from their first two ep’s as well as a few gifts from their upcoming release The Blueprint For Moving Forward. Honestly watching caution:thieves was like seeing a band play on a big stage for the first time. The entire band had this almost hypnotic jovialness, contrary to their seemingly angst-ridden music, everything about them was contagious and it rubbed off amongst the crowd that had arrived at Max Watts early enough to see and hear them. caution:thieves kicked the eager crowd into first gear in preparation for Ebonivory from Victoria’s regional town Ballarat. I got the opportunity to see about half of Ebonivory’s show on the small stage at last years Progfest and was blown away by how mature, confident and damn capable of writing such intense and heavy music by a band full of young artists who have nothing to prove but their passion and desire to be noticed. So imagine my astonishment when seeing them being named as the main support for the Circles ‘The Winter Tour” and witnessing a sound, presence and sheer majesty that was 1,000% beyond what the audience saw at Progfest opposed to tonight. I was in no way prepared for the show Ebonivory delivered to the Max Watts audience. Watching Ebonivory live is seeing a band intent on proving to the world that they deserve to be noticed and respected thanks to their ability to unite their completely attentive crowd due to their inspiring and mature multi-faceted eclectic influence to heavy music. Seriously I couldn’t hype Ebonivory any more if I tried and nor do I need to because honestly their passion and honesty in the pursuit of their artistic musical endeavours and performances speak louder than any reviewer could. I am looking forward to watching Ebonivory force the world to take notice of them.

Band number three for the evening was Rival Fire, who, for those that are unaware fronted by Rob Farnham, whose father is none other than The Voice himself, one John Farnham. Rival Fire are obviously heavily influenced by some of the staples of Aussie heavy rock music royalty the likes of Cog, Karnivool, Dead Letter Circus, The Butterfly Effect and more which is all contained into one neat little package of alt-rock known as Rival Fire. They have managed to formulate a sound and style that cohesively blends and harnesses their influences and flush out the nuances of the above aforementioned artists and create music that is contrary to their onstage persona, which is jovial with tongue firmly planted in cheeks yet sonically when they perform there is a dark yet calming dichotomy at play within their music.

Finally, after years of being the Bridesmaid of sorts in terms of being a support act, Melbourne Heavy Prog band Circles have finally been able to become a headline act. And about bloody time!

Having seen them perform on the main stage for the very first time at last years Progfest in Melbourne, I was instantly engaged and held captive by Circles’ blend of heavy prog which was complimented by the vocals of Ben Rechter. The way everything about their heavy approach to music and stage presence is complemented by his angsty yet calming singing and vocal delivery which just makes for a near-perfect live performance. Performing songs from last years incredible album The Last One as well as others from their back catalogue, the evening was unfortunately halted five or so songs in thanks to one punter thinking it was a good idea to slam dance at a prog gig and jumping around like a tool and ultimately going too far, falling to the ground and knocked himself unconscious. Circles were unfortunately and disappointingly forced to halt their performance whilst, paramedics attended the situation and make the venue safe for everyone at the venue. What took almost forty-five or so agonising minutes, it looked as though Circles would not be able to finish their set. But alas, that was not the cas, thankfully Circles graced the stage once more and were able to play for another half an hour or so ensuring that their performance would not be tainted by one person moment of stupidity.

Those final few songs of Circles’ gig were unifying, bringing their fans together to celebrate a band whose music has reached out and bonded with us, connecting us intimately through purpose, passion and intent that rare few bands can do.

Circles have gifted us a style of music that screams darkness yet is somewhat soothing at its core and if you are a fan of any style of progressive heavy music at all and are yet to hear or see Circles music or their live shows, then I implore you to emerge from your safe place and find solace in Circles.