[TOUR] BRING ME THE HORIZON – SOLD OUT MELB, SYD, ADL 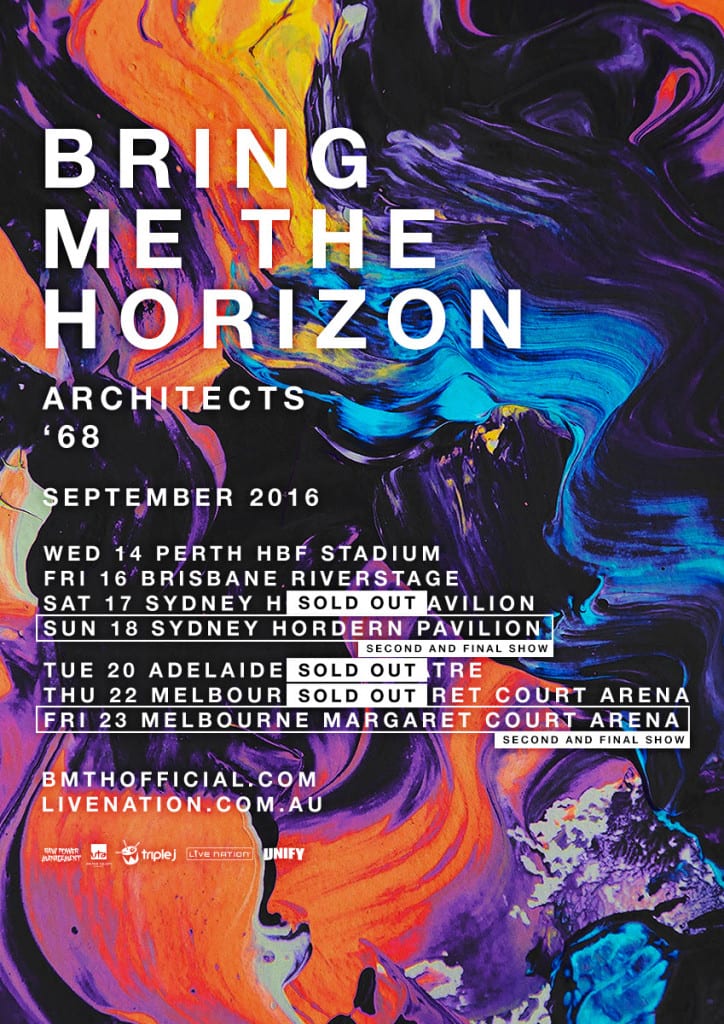 BRING ME THE HORIZON have announced their Adelaide show at the AEC Theatre on September 20 has officially SOLD OUT!

With the first Melbourne (1st show), Sydney (1st show) and Adelaide shows now sold out, no further dates will be added to the tour so you will need to get your tickets right here… right now @ www.livenation.com.au

Returning to the Australia in support of their fifth and most diverse album, ‘That’s The Spirit’, these will be the first headline shows the band have played on the continent since 2013. Ahead of their shows this September, Bring Me The Horizon have released a new video for “Avalanche”, which showcases the band on the road over the past year, including clips from their show at London’s Royal Albert Hall.

Brighton, England, five-piece ARCHITECTS released their highly anticipated new album, All Our Gods Have Abandoned Us, in May, which debuted at #2 on the ARIA Chart – the highest ever chart position of their career in not only Australia but the rest of the world. Architect’s seventh album All Our Gods Have Abandoned Us is a powerfully dark and sonically intense critique on the world, and paired with their vicious and crushing live show they will be an unrelenting force when they return to Australia this September.

Hailing from Atlanta, ’68 are a two-piece that demonstrate the loud beauty of alarming simplicity. A guy bashing his drums, another dude wielding a guitar like a percussive, blunt weapon while howling into a mic somehow manages to sound bigger and brasher than the computerised bombast of every six-piece metal band. Their debut album, In Humor and Sadness, is available now.

TICKETS FOR ALL OTHER SHOWS ARE ON SALE NOW