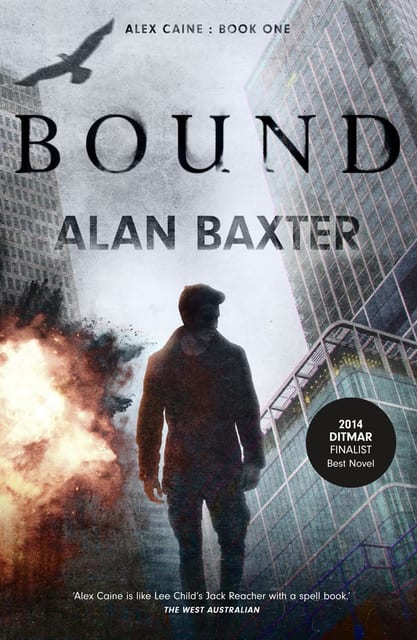 When it comes to writing Fantasy, it’s hard to stand out from the crowd these days. By simply uttering the word you draw comparisons to every Fantasy classic like Lord Of The Rings through to Game of Thrones and Harry Potter, it’s a tough market to crack it in, but the novel Bound by Alan Baxter seems poised to do so.

The first of a trilogy, Bound is a dark, urban fantasy novel which is equal parts globe-trotting adventure and suspense thriller packed with well-crafted, cinematically written action scenes. The book begins with a bang and never lets up for its 345 pages. Our protagonist, Alex Caine, is a rough and tumble cage fighter with a mysterious past. He possesses a unique ability to “Sense” his opponents moves before they can happen, to which he uses to great success in his underground fighting matches. When an equally mysterious man confronts him and tells him that he knows his secret, events are quickly set in motion which will force Alex to go on a globe-trotting adventure to discover the secrets of his ability and face deadly foes who’s intent is to harness his power and destroy him.

An interesting aspect about Bound is its ability to merge dark fantasy with a grounded urban setting. It’s relentlessly violent and brutal, but also chock full of solid world building and deep magic that gives the tale a fresh spin on what could have been seen as conventional. The book also moves along at a breakneck pace; it feels as if you never stop to slow down for anything. While some might find this a slight drawback, I felt the fast pace worked in the book’s favor, giving an intensity to every scene that played out throughout the tale.

Speaking about brutal, the action scenes are incredibly well staged; I could see this working as a movie as the descriptions are vivid and stick right in your mind’s eye. Author Alan Baxter is also a kung fu teacher, and it shows through well in his fight sequences.

Of course, it’s all good and well to feature wall to wall action, but without interesting characters, it would be pointless. Thankfully Bound contains a wealth of interesting heroes and villains, Alex is a very human and relatable protagonist, his past is intriguing which makes you want to find out more and he’s reluctantly thrown into situations that make you compulsively read on to see how he will escape his constant predicaments. On the other side of Alex are a varied and entertainingly dark cast of villains, special mention goes to Mr Hood and Sparks, who are just malicious creations.

All in all, Bound is a terrific first novel in the Alex Caine trilogy, it’s set the stage well but has also left things open for the next two books to build on and hopefully lead to an explosive finale. If you love fast paced, action packed, dark urban fantasy, you can’t go wrong picking up this hand grenade of a book.