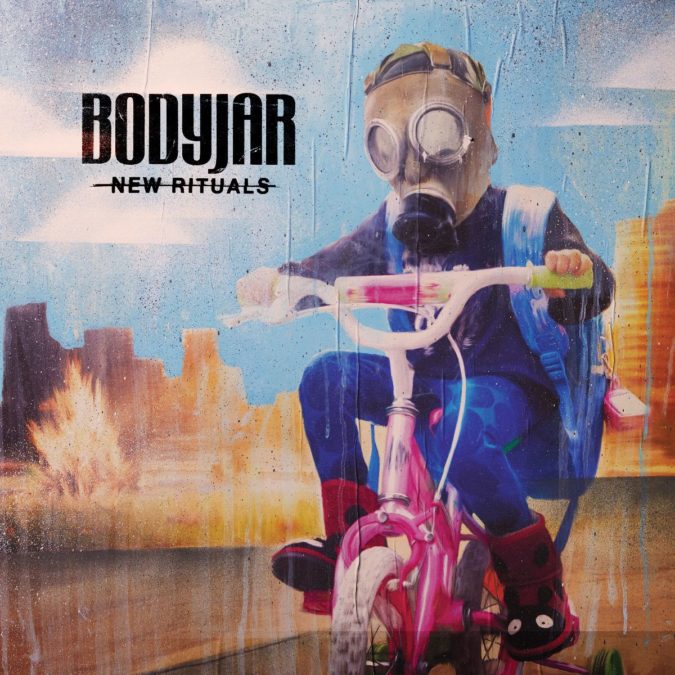 Bodyjar are an iconic Australian punk outfit, having inspired thousands of pogos and flailing of limbs across dance floors since 1990.

Over the course of eight albums they have maintained their youthful angst and humour, following a tried and true formula that has never grown stale.

While never gaining that breakthrough single that would have rightfully catapulted them to an international audience, the  band has released a steady stream of well received songs, with their cover of Hazy Shade Of Winter and Not The Same, which made it onto the soundtrack for the Tony Hawk series of video games, both a staple at live shows.

Now, after a nine-year absence, Bodyjar have returned with their latest album, New Rituals, and it remains to be heard if father time has finally caught up with these not-so-young anymore upstarts.

Opener Burning Truths kicks off with a bit of feedback – at least telling us the band haven’t learnt anything else about their instruments over the past almost decade – but soon gives way to a rollicking and fun little number that has all the elements of… Bodyjar.

Billy is up next, with a swirling of guitars and basic rock beat continuing tradition. This is an upbeat number that won’t win the band any beers for breaking any form of musical mould,  but that’s not what Bodyjar are about.

They are the punk version of AC/DC in that you know what you are going to get when you buy an album with their name on the front.

If you aren’t a fan by now then you probably never will be but in all honesty, what is there to not like?

These guys are fun, adventurous (judging from their lyrics) and funny as fuck in places.

Get Out Of My Head is a fast-paced tune that is introduced by a cool guitar lick before vocalist Cam soothes over the top, signing something about old clichés and not knowing what’s right. I’m sure there’s more to it than that, but already I know this song will be stuck in my head for a while, so I shall dig deeper at a later time.

Ignorance has more of a hard grunge vibe before turning into a boppy punk tinged song that is punctuated by that same guitar riff that brings it back to life every time it threatens to fall into a routing pop/punk song.

Surrender is everything Green Day wishes they could still do. It’s punk enough to keep the purists from cutting their mohawk, but also accessible enough that there’s a good chance it will make it onto some form of radio program.

Big Shot is more of a rock song, with a steady, toe tapping beat that meanders along without that big “fuck me” moment that you are possibly hoping for.

What’s this? This track sounds familiar and as I start to subconsciously along I figure out that’s because it is!

It’s faster paced than the original and given the punk treatment without tearing the heart out of the original. I’m not sure if that is out of respect for Dragon or whether they just thought this was a damn fine song as is, but who cares.

Pieces blasts off with a nice drum roll before the swirling guitars take over and bang, we’re off again on the chirpy, infectious ditty that Bodyjar do so well.

Be The One is the most different song yet, background guitars interrupted at irregular drum chops and measured, calming vocals. It is a slower, seemingly more deliberate song than Bodyjar usually do but flows nicely.

With the album rounding out with Tongues, Reaction and When The Stars Go Out, New Rituals is a solid album by a band who have proved they still belong in the music scene.

It’s nothing overly ambitious or revolutionary, but it also never claimed to be.

It’s simply a fun punk/pop album with enough catchy hooks to catch a barge full of fish with.

And that, my friends, is exactly what you want and expect from a Bodyjar album.