BLOODBATH ‘The Arrow of Satan Is Drawn’ From what started out as a side project for a bunch of legendary Swedish musicians in the late 1990s, Bloodbath soon rose to become an iconic name in the history of HM-2 fuelled Swedish death metal. Spanning over a 20 year career, Bloodbath has since released four studio albums, two EPs, two live albums and now a crushingly heavy fifth studio album: The Arrow of Satan Is Drawn.

The opening track, “Fleischmann” instantly struck me purely because of its notable influences of black metal in the main riff. This track is the perfect combination of groove and pace, with prominent tempo changes that makes you want to seriously bang your f***ing head!

As we rummage further into the contents of this record, a clear standout element is undoubtedly that filthy, definitive HM-2 guitar tone with the gripping guitar work of Anders “Blakkheim” Nyström and Joakim Karlsson, the latest addition to the band.

“Bloodicide” certainly created a lot of hype around the album with its release, and for good reason. It features some extremely noticeable names in death metal with Jeff Walker (Carcass), Karl Willetts (Bolt Thrower) and John Walker (Cancer) all joining forces to throw down a serious death metal anthem.

The Arrow of Satan Is Drawn is Bloodbath’s second studio album with “Old” Nick Holmes on vocals, and there is no doubt that his harsh sounding growls on this record are by far his best studio performance with the band. That is not to say that his debut performance with the band on Grand Morbid Funeral wasn’t good – it was seriously great. However, his vocal performance and lyrical content on this album can be summed up in two words: disgustingly evil. 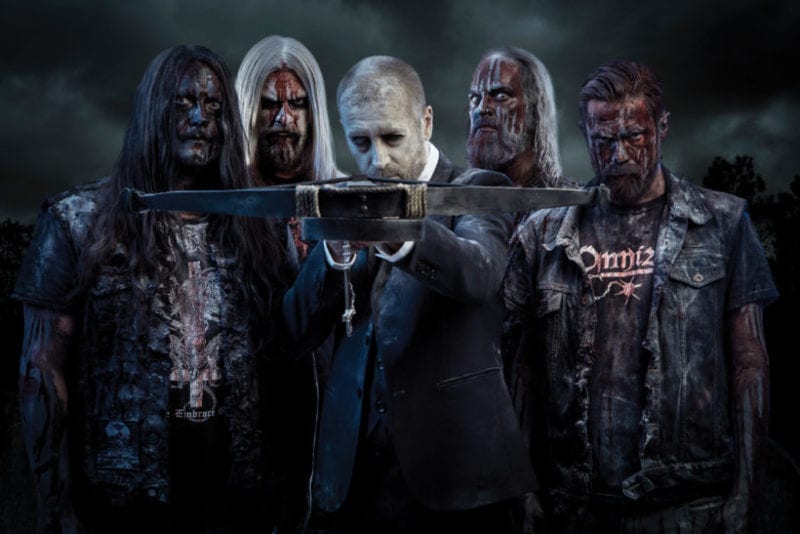 “Levitator”, written by Jonas “Lord Seth” Renkse, launches in with a drop in tempo to that of the previous track, “Wayward Samaritan”. The slow, sludgy guitar riffs makes this one hell of a groovy death metal track, along with a guest solo featuring Tomas Akvik, lead vocalist and guitarist of fellow Swedish death metallers, LIK.

At this point, I think it’s safe to say that the next four tracks can be described as having vicious vocals and solid riffs along with some heavy, yet groovy beats powered by Martin “Axe” Axenrot. This is clearly evident in tracks such as “Morbid Antichrist” and “Deader”. Initially, I wasn’t sure about that song title, but on second thought… What’s more brutal than being more than just “dead”? Exactly.

“Warhead Ritual” is certainly a standout track on this record, perhaps because it’s a little different and experimental within the Bloodbath realm. The riffs and solos are heavily influenced with some rock ‘n’ roll, making it a little different to the straight up Swedish death approach. “Old” Nick’s vocals on this track, particularly his lows, is definitely something that also grabbed me from the very beginning.

Bloodbath have a serious habit of finishing their albums strong, and The Arrow of Satan Is Drawn is no exception. “Chainsaw Lullaby”, in my opinion, is close to being one of the catchiest songs Bloodbath have ever written. Featuring samples of growling chainsaws and screaming, this track has the theme “horror movie” written all over it. Listening to this song in particular excites me so much when I think of hearing it being performed live, as it truly is a straight up groovy death metal song with catchy, yet evil lyrics. My only criticism, however, is that this song could have been replaced with “Only the Dead Survive” as the closing track of the album, as I feel that the outro of this song could have potentially been the perfect end to a brilliant album.

The Arrow of Satan Is Drawn has been mixed and mastered perfectly by Karl Daniel Lidén. He has been able to precisely balance that dirty, muddy HM-2 guitar tone that Bloodbath are recognised for whilst incorporating a bit of a modern twist. The album is a masterpiece. If you like your death metal served fast and heavy with a strong element of groove, I would highly recommend that you give this record a spin.