BLEED FROM WITHIN: ‘Shrine’ 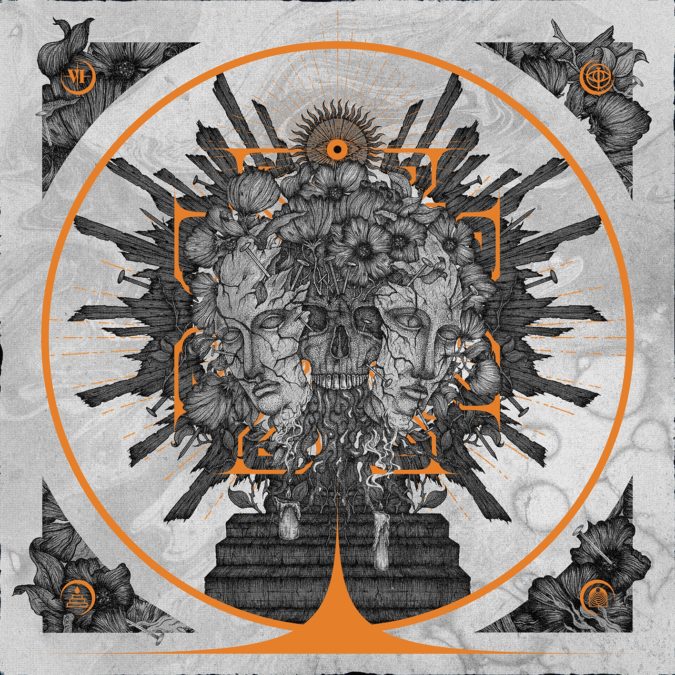 For more than 17 years Scottish metal outfit Bleed From Within have ruled the European roost when it comes to genre-blending.

Drawing from all manners of genres and subgenres to create a sound identifiably their own, Bleed From Within have refined their sound with each album, unafraid to experiment within and outside the musical parameters purists insist a band must reside in.

With their new album Shrine, Bleed From Within have delivered arguably their finest work yet, in the process making an emphatic statement of intent that will carry them long into the future.

Opening with one of the three singles in I Am Damnation amid a swirling mass of industrial style chantings and whispered vocals, Bleed From Within set the tone for an album with no rules or limitations, bound by nothing except the will of the five band members.

The song quickens slightly, drawing on the energy and output that only new music can generate, the vocals becoming more dominant and imposing as the song progresses.

It descends into a chaotic ball of controlled aggression, almost subdued in places, which shows the band have given thought to the “less is more” ethos successfully employed by bands at the top of their game.
This is a ball tearing opener, not giving too much away while at the same time giving a positive indication of intent.

Sovereign explodes with a quick guitar run before Ali Richardson assumes the mantle on drums and deftly brings the rest of the band to attention.

Vocalist Scott Kennedy is a mass of aggressive intent, barking and orchestrating proceedings like a well-oiled machine. The music is fast, frenetic and furious, with the guitar work of Craig Gowans and Steven Jones and the bass precision of Davie Provan adding layers of thickness to proceedings that would be hard to walk around in.

This is a song to raise the dead, full of guitar solos and double kicks that accentuate the strengths of the band. In fact, so far it seems the guitars are leading every sonic assault, dictating terms and rallying the troops with a steadfast precision.

Levitate shifts focus quickly, a softer, more ambient intro awash with tempered vocals that are soon smothered as Kennedy screams the serenity into the abyss. Nothing about this album seems forced or contrived, with the heaviness an accompaniment to the music rather than a domineering force.

Layered vocals punctuate at set intervals, luring Levitate back to greener pastures momentarily before retreating to the initial wasteland of torment that drips from every note.

Flesh And Stone is another surprise, more epic and grandiose in scope with an almost cinematic type feel that is abruptly put in its place by a sweet guitar run that is the catalyst for the music to begin and all traces of a peaceful resolution are buried beneath a wall of sound. This track is interesting in that it maintains the underlying cinematic elements that are occasionally allowed to bubble to the surface, offering a uniquely contrasting sound that probably shouldn’t work but somehow does.

Invisible Enemy opens with a steady guitar chugg accentuated by a couple of china strikes that deliver the most accessible song so far on Shrine. The vocals are measured and more deliberate on the whole, cleans and harsh vocals vying for supremacy. It is a crushing indictment of how heavy a song can be while still having mainstream appeal and makes me wonder why it wasn’t chosen as one of the singles.

Skye is a stripped back number, beginning with orchestral tidings that hint at this being the obligatory ballad. I normally skip here but there is enough in the early exchanges to keep me listening. Then, as suddenly as it appears, the song finishes, leaving a sense of unfinished business that hopefully will be revisited later on the album.

Single Stand Down is next, so you should already know all about that before Death Defined rears its morbid head, led by guitar play and a stuttering sense of belonging that keeps a smooth tempo in the opening exchanges.

Kennedy has none of this, adding his distinctive vocals to the track and giving it a firmer edge that is still controlled by solid riffs and a clean chorus section that is haphazardly interrupted by cries of anguish.

Shapeshifter has the feel of someone doing just that before erupting into a musical carnage and the fiercest song so far on Shrine. This heaviness is integrated expertly into all of the songs on the album, with the contrasting harsh/clean vocals throughout feeling more part of an expansive storyline rather than a musical fall back designed to be genre specific.

Shapeshifter is full of aggression and vicious intent, made all the more memorable by a controlled chaos that is held together by each instrument as it jostles for supremacy.

Temple Of Lunacy bounces from each vantage point and meets somewhere in the middle, a restrained slab of venom that seems to grow angrier at itself the longer it progresses. This one is even more imposing than Shapeshifter with moments of light and shade that blend seamlessly.

Killing Time reverts to the industrial side of metal, brought to life by a mass of guitar riffs and solid drum patterns, before vocals assume control, and once more we are off into the depths of battle.

Usually by now the whole harsh versus clean vocals thing has started to wear thin on these ear holes, but not so here. Both styles are employed to generate maximum effect rather than imposed for stabalising reasons, adding an authenticity and clarity to Shrine that sets it apart from many other albums of similar ilk.

Album closer Paradise sweeps into life on the back of a majestic organ percussive section, enticing an almost hypnotic reaction that is compounded by a softer vocal delivery that still captures the raw aggression of Kennedy’s voice. A layered chorus provides the beauty, while the almost whispered at times vocals fill in the tension.

It is an ambitious and epic finale after the controlled aggression that precedes it, but also a welcome finale to a body of work that is undeniably the product of a band confident with and within themselves.