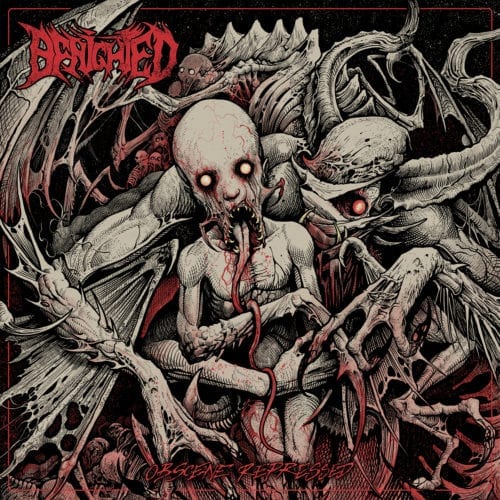 “Benighted are the poster children for all that repulses and delights the immoral minority. Those of us who love extreme metal and seem to be drawn to darker aspects of human capabilities and their pleasurable malevolence. The whole band has a clear binding rhythmic unity that controls our heartbeat… like Dahmer through a Homo-Sapien Sunday roast…!”

Three years since their last release, France’s death grind provocateurs Benighted have returned once again with a lovely little concept album about a young man with a cleft palate who has a naughty imaginary friend and “Oedipus issues”. Not that there’s anything wrong with that…But the talented young blokes in Benighted have penned a tale regarding these topics and what happens if shit happens to go awry (as only a good-natured and talented grind band can!)

For some full killer and disgusting clag mouth joy, make sure you have your headphones on for the opening of the first title track of the album — “Obscene Repressed”. It launches unfiltered and apocalyptically like a fat kid on cake or a boy hugging his disgusted mummy just that little bit too hard thanks to being the runt of the litter. Only the finest of creative dark minds could conjure such tales of altered species malevolence and few do it better than Benighted. Their latest horror tale known as Obscene Repressed is just another glimpse into gore riddled magnificence.

To guide me through the album and delve into Benighted’s mind, I followed the accompanying press release lyric sheet and found three of the tracks (“Obscene Repressed”, “Brutus” and “Undivided Dismemberment”) are sung in French and the rest of the album in English. So, unfortunately, I will be unable to discover the intent within the title track, the purpose of these done in such a way that they will be themes yet outliers for the album. But if you get a chance to peruse the lyrics then the story of our young disfigured protagonist and his battles within himself and the parental unit shall unfold.

Track two “Nails” is a hardcore influenced face smasher which delves into our protagonists early childhood and his disfigured-self. Bludgeoning through a myriad of musical styles and sensory emotions surely outlining the picture of Obscene Repressed. The underlying groove that frames “Nails” is fucking killer.

“Brutus” heralds a solemn intro that bleeds into my ears before a short phrase – “Mum, I made something beautiful for you” hauntingly prepares me for another Benighted onslaught with a breakdown that was so punishing that not even my expensive Sony headphones could handle the apocalyptic BOOM that blew out nearly both my eardrums and headphones. It could have been catastrophic not for my eardrums but those headphones mean a lot to me \m/   \m/ I put the French lyrics through the Google Translator and could barely sumise a meaning from the lyrics obscure but I will ascertain through assumption that some brutal shit went down thanks to the title “Brutus” and its closing line – “I just felt like destroying something beautiful!”, clearly referencing Benighted’s intention to completely obliterate my Sony’s and eardrums simultaneously!

The whole purpose of gore was to be a big musical accompaniment, soundtrack if you will, to any good, bad or magnificent B-Grade horror film. I am actually quite surprised that there has been a lack of really good, proper grind included in such films. Yes, some folks think that Rob Zombie and Ghost write good scores that could easily be the background atmos for a decent hollywood slasher flick, but think of all the truly great obscure and disturbing movies. Remember Martyrs, ironically a French film, the first Hostel or even Irreversible! I could go on but you get the idea. Blood pouring from every direction guided delicately due to the hypnotic pulses of the notes played inspired by gore. You could easily sense and believe the track eight “Casual Piece Of Meat” be a song playing throughout any of the lovemaking scenes in either Nekromantik I or II

Benighted are the poster children for all that repulses and delights the immoral minority. Those of us who love extreme metal and seem to be drawn to darker aspects of human capabilities and their pleasurable malevolence. The whole band has a clear binding rhythmic unity that controls our heartbeat. “The Starving Beast”, “Smoke Through The Skull” and “Bound To Facial Plague” blast and groove like Dahmer through a Homo-Sapien Sunday roast as vocalist Julien Truchan squeal commentates on every desirable cut.

Obscene Repressed is yet another stellar album to sit alongside Benighted’s already brutal back catalogue and if utmost brutal essence or a slight human mutated disfigurement with Mummy issues is your kink then you require Benighted via sonic infusion stat!