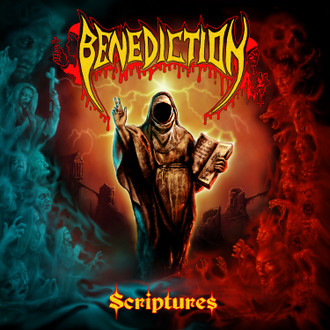 Right down into it and no fuckin’ around – Benediction’s new album Scriptures? Well, it fuckin’ rules!

Classic no holds barred, straight up killer death metal just as the old school forefathers of the genre intended. Regardless of whether they were from the U.S of A or the U.K., death metal at its very core was always meant to be foreboding, dirty, angry and unapologetic. We know this thanks to the album covers plus both album and song titles; now on Benediction’s latest album Scriptures we hear the absolute epitome of the purity of death metal, past, present and future.

At the beginning of 1990 Benediction were one of the first bands to embrace and begin to forge the genre with their debut Subconscious Terror [1990], The Grand Leveller [1991] and now revered Transcend the Rubicon [1993] but then their groundbreaking album The Dreams You Dread was released to critical acclaim in 1995 and rightfully so! This was the period where death metal was getting the magnificent production it deserved accompanying the stellar song composition these insanely talented extreme metal musicians were crafting and it showed on Benediction’s …Dreams album.

I won’t harp on the evolution of our beloved and excellence in musical tastes nor the backstory to the current state of Birmingham’s Benediction. You can read and listen to that here but what I am here today to talk to you about is 2020’s Scriptures. Here is a band from decades past that have neither reinvented nor reinvigorated themselves. What they have done is welcome back former and exceptional vocalist Dave Ingram who gave Benediction the SOUND that they are so revered for, let him loose with a pen, notebook, alone in a studio with a microphone and a headful of texts and here we hear Ingram’s best work without question. Far superior to his already distinguished back catalogue of work. Scriptures is proper fucking death metal and Benedictions pièce de résistance.

As I said at the start what we have here is classic and straight-up Benediction without compromise or apology. Scriptures exudes hate and anger and straight-up brutality, accompanied by grooves that just won’t quit, beats that demand your skull demolishing attention.

The songwriting of Daz Brooks and Pete Rewinski is just golden. Don’t go in thinking you’ll be overwhelmed by eight-stringed technical wizardry or tech death drum timing. From the opener “Iterations Of I” to album teasers “Rabid Carnality” and “Stormcrow”, we can hear that Benediction have far from rested on their laurels and purposely returned to their roots. With Ingram clearly growling better than he ever has and with Gio on Drums and Dan on Bass Benediction have released not only an exceptionally important album for themselves but also for all the newcomers to a genre who want a tutorial on how to death metal properly.

I can’t break down any particular moment, riff, beat, breakdown or poignant moment of importance on Scriptures because truthfully start to finish it stands alone as a killer full piece of art. The twelve year hiatus between pints from Killing Music [2008] to 2020’s Scriptures time has gifted the members of Benediction the opportunity to reforge the flame of old school death metal for a new generation.