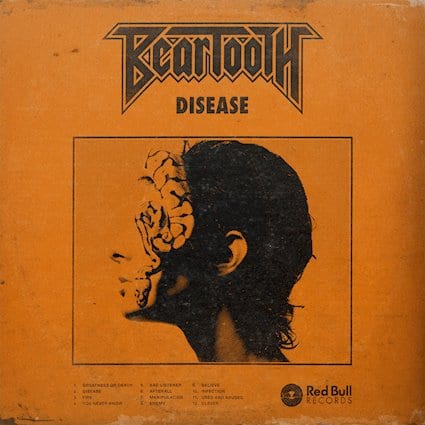 It’s been just over two years since we’ve heard from Caleb Shomo’s beast that is Beartooth, well, in a new music sense anyway. The one man project become quartet has been busy and they’re about to get a whole lot busier.

Beartooth are set to release his/their third studio album Disease and having just kicked off a world tour with a list of dates as long as a tall man’s arm the wheels are solidly set in motion to take this roller-coaster ride of music to the masses.

The opening track off of Disease “Greatness or Death” starts out with a striped acoustic section with an emotional and moody lyric “I promise you there’s times I’m not so sad,some days I get relief and off the bed, I know I’m married to my problems, it’s always in my head that I’m destined for greatness or death” followed by an absolute powering of killer guitar tone into the track, the listener is now set to embark a deep and honest journey into Caleb’s head. In short “Greatness or Death” explores the highs and lows of being a human, with self-gratification and self-doubt rolling in and out of the mind constantly.

The title track “Disease” continues to dip the overall sound into a heavier genre but when you team up with a master producer like Nick Raskulinecz its becomes a natural process, the guy is a dead set genius when it comes to broadening sound. With that being said the chorus rules the track with an emotive heart wrenching vocal bringing it back to the bands pop punk essence. The meld of sounds is crochet perfectly.

Something that is evident on this album is the continued rhyming lyrics, once you become aware of this it’s kinder hard to shake. This has two effects, it makes the lyrics very easy to retain and two,the lyrics stick to your cranium like body adhesive. If you are after a walk through the dictionary then this album isn’t for you, the lyrical content is straight to the point with constant riddle like chants throughout. “Bad Listener” opens with “You say my visions aren’t visions at all, there’s no degree in rock n roll, say it’s a waste of time, say I’ll never get a real shot, I’ll be bangin’ my head till my brain rots”. Just so we are clear the simplicity isn’t a bad thing, in fact the direct and to the point lyrical content is refreshing, it’s black and white in every sense and can’t be misconstrued.

Sometimes you gotta write and say it exactly how it feels, Caleb succeeded in this constantly throughout the album.

Tracks “Manipulation” and “Enemy” are set for live interaction, with continued lyrical chants and rhythmic down beats that will have the punters twisting their necks clean off!

The closing track “Clever” sits close to being a pop punk ballad, it doesn’t match the openers at all but it gives Disease a lot of contrast and ends the emotional ride on a happy high!

Overall the album gives you a sense that life is worth the struggles after all, cause and effect is evident throughout this entire album and as a music fan I’m just bloody glad these emotions have been turned into music, into a band, into a band that tours and gets to project such things on such a perfect platform!

Get your fists in the air, embrace someone you care about and come grab life by the throat with Beartooth!

Listen to our interview about “Disease” with Caleb here!