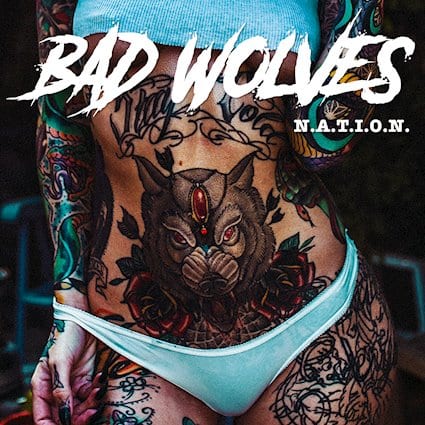 Whenever Bad Wolves have spoken about their brand new album – N.A.T.I.O.N – they have always been really vocal about the fact that they are a band that it still evolving. That is certainly also the first thing that hits you when you sit down and take a listen to the album as a whole.

This feels like an album that has been delivered by a band that is still finding their sound, a band that is eager to try different things to see what feels right for them or what seems to appeal to their audience a little more..

For those out of the loop, Bad Wolves are the band that everybody is talking about at the moment. 2018 was their year as the ‘Band On The Rise’ and for anybody that happened to see them open for Nickelback on their Australian tour, you could certainly see why. They blew the audience away during those gigs and while many people at the time asked why the hell Bad Wolves were opening for Nickelback, this is the album that really explains why – because Bad Wolves are very much a band with two very different sounds.

The one thing that hits you listening to N.A.T.I.O.N. is that there is a very black and white side to the album – there is no grey in between. You either get tracks of sheer brutality that would win over any heavy music fan or you get softer tracks that are borderline on whether or not they would make the Triple M playlist… and it is those tracks that secured these guys the opening rights for Nickelback.

In other words, to listen to N.A.T.I.O.N. and love it you have to be the kind of metal fan that likes a wide variety of genres. The album kicks off with ‘I’ll Be There’ which at times is sheer brutality and easily reminds you why they nearly ripped the roof off Rod Laver Arena earlier this year. Despite the brutal sound though the band still manages to find the right mix of melody and it appears that you are onto something special with the amazing.

Then comes ‘Like A Homicide’ which really showcases the amazing vocals of Tommy Vext while interestingly enough constantly changes the pace instrumentally… a style that really seems to work for Bad Wolves.

It is then though that the album seems to take a turn toward the softer side. ‘Learn To Walk Again’ is a brilliant track – it’s catchy and has a single written over it. That catchiness continues on the slower ‘Killing Me Slowly’ which really shows that when done the right way a ballad is not necessarily a dirty word. It is easy to see that Bad Wolves know how to deliver a good ballad and hell you can easily tell that ‘Better Off This Way,’ ‘Sober’ and ‘Wildfire’ are all from the heart, the last is extremely poetic, but it also does seem that four tracks like this on one album is a little bit of overkill.

The edgier side of the album does raise its head at times. The brashness of the early tracks is clearly there on ‘Back In The Days’ while ‘LA Song’ really makes a statement while showing just how heavy Bad Wolves are.

With the heavier and softer sides of Bad Wolves on show, N.A.T.I.O.N. is going to be one of those albums you either love or you hate – just like the band’s own sound there is not going to be any middle road.

PrevPrevious.JINJER – Macro
Next.WIN!!! 1 Of 3 Double Passes to see BETWEEN THE BURIED AND ME [Bris, Melb & Syd]Next