Back To Basics With DEVIN TOWNSEND

There is always something special about watching a Devin Townsend show.  The masterful musician seems to put on a mesmerising clinic as you watch him go about his business live on stage. Now Townsend is bringing something very different, but very special, to Australia. An intimate night of acoustic music that will also see him interact with his audience as he addresses any questions that they may have for him. It is a concept that has Townsend very excited and something that he feels is very important for him to do.

“I think over the past few years I had started to view live performance more of replicating music rather than playing it,” explains Townsend when HEAVY Mag gets the chance to sit down and have a chat with him about the tour. “And to be honest I got to a point where… I didn’t resent it… but a point where I felt like I was disconnected from the music in a lot of ways. A lot of the reason for that is because it became really really automated for me. There were lots of backing tracks, click tracks and computers and it was very cool, and in my opinion an effective performance tool, but the vision that I have for music is one that is important enough for me to get right in this life time… and I haven’t got it right yet.”

For anyone that has ever seen Townsend play – whether it be a solo show or with bands like Strapping Young Lad – that may come as a surprise, but Townsend is adamant. “So I have stripped it all back,” he continues. “I broke up the band, I made the album Empath which basically allowed me to do a whole bunch of different styles, mix it myself and really analyse my relationship with every single component of my musical identity. And the acoustic shows act as an equivalent way of my stripping back in a live venue. Showing up with an acoustic guitar and me, as much as that might imply a folky, kumbaya goings on it is much more because I’m hoping that these songs will prove to the audience, whether it be Strapping or Empath on acoustic it will have the same emotional impact. Without having all that stuff to hide behind it really gives me a chance to perform, sing, play and be present in a way that means when I do get to play Empath in full over the next few years that I will have had that experience…. and that has been invaluable to me thus far.”

That leads me to ask whether he has discovered things about his music that he didn’t realise was there when he has sat down and stripped some of the older tracks back. “That is a good question and yes,” he says as we talk about how even the greats like Nirvana learnt a thing or two when they tackled their tracks acoustically. “The emotional component of this music exists no matter how it is decorated. So no matter whether it has choirs or orchestras or three hundred tracks of crap on it or whether it is just me, my voice, some reverb and my guitar I feel very similarly about this music, and I think the most enlightening thing about that to me is recognising that all this music is written like that. However layered these albums end up being, and some of them are incredibly layered, they all started with me and guitar.”

Of course the other big issue for Townsend is picking what tracks would work best in the acoustic format – after all if you include his solo and band albums he now has twenty-five albums worth of tracks to chose from. “It was a combination of what I wanted to play and what I thought would work well in this format,” he explains as we talk about how he selected the songs to play. “But I also just take requests from people as well. I think it is a good problem to have but when you have as many records as I have you are looking at a catalogue of  three hundred to four hundred songs – so when someone says ‘you can choose twenty… go’ I was like ‘well, wait a minute because I don’t know what will work.’ So there is a bit of trial and error in it and you can normally tell pretty early on whether or not a track is going to work or not in that format. I have been doing these acoustic shows now for about a year and it has gotten to the point where I have a much better understanding of what works and what doesn’t.”

You can listen to the full interview with Devin Townsend on Spotify. All the tour details can be found right on this page. 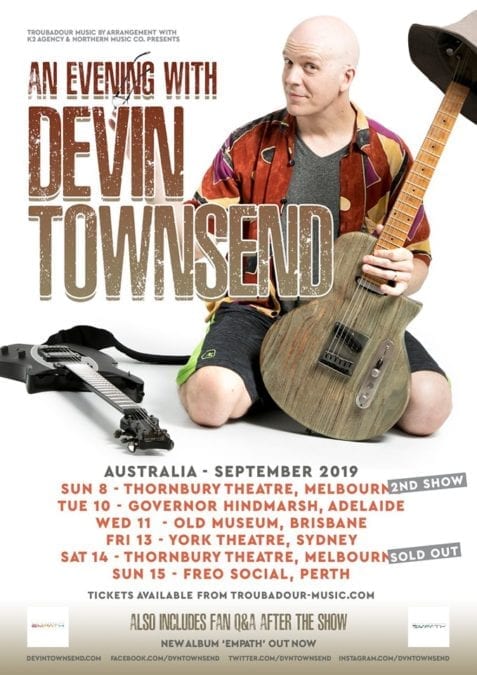