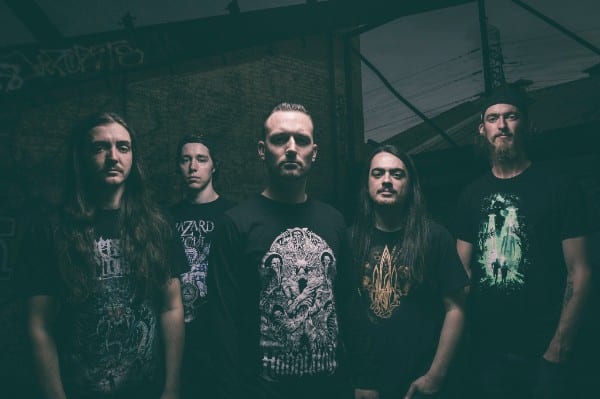 Last week, HOLLOW WORLD unveiled their savage new track WILDFIRE and announced their new album EXANIMATE release details – the album out on March 17th. Having just played alongside some of Australia’s best extreme metal artists on the Thrash, Blast Grind Festival alongside King Parrot and Psycroptic, today they are rolling out their Exanimate Album tour dates across Australia.

Exanimate Pre-Orders are now available from now at the band’s own website – hollowworld.com.au, as well as Pre-Sale Tickets for some of the shows on the tour. The unrelentingly brutal new single WILDFIRE will be available now at iTunes and Spotify for purchase/streaming.

The Exanimate Australian tour, presented by Amoeba Quake Events, sees them playing most shows alongside Daemon Pyre and Zeolite and travelling to the Red (Dead) Centre of Australia to play Blacken Open Air Festival in Alice Springs. The tour also takes in stops in Ballarat, Melbourne, Newcastle, Sydney, Warrnambool, Adelaide and Brisbane along the way, with a host of amazing local supports.

New Album “Exanimate” consists of two stories – One about a super-virus that wipes out the human race, the second story is of the human race being a virus that wipes out the world – rendering it uninhabitable. Both these stories twist and turn around each other as the album plays out, exploring the similarities between what a super-aggressive virus can do to a living body and the irreparable destruction that human beings are inflicting on our planet.

New album Exanimate has seen Hollow World push themselves not only from a technical perspective on the record, but also from a songwriting perspective. Roberts offered that “Instrumentally we have all grown more in-tune with each other and created more of a distinguished “sound” that is Hollow World. It’s fast, it’s melodic, it’s heavy, it’s savage and it’s relentless. It’s 40 odd minutes of extreme melodic death metal that we could not be more proud of.”

Hollow World has shared the stage with Plini, At The Gates, Ne Obliviscaris, Psycroptic, King Parrot, Be’lakor, Boris the Blade, Make Them Suffer, Bleeding Through, Frankenbok and ROME.

For more information and for pre-sale tickets, go to hollowworld.com.au