AT THE GATES, THE HAUNTED, WITCHERY at Max Watts, Melbourne on 27/4/19 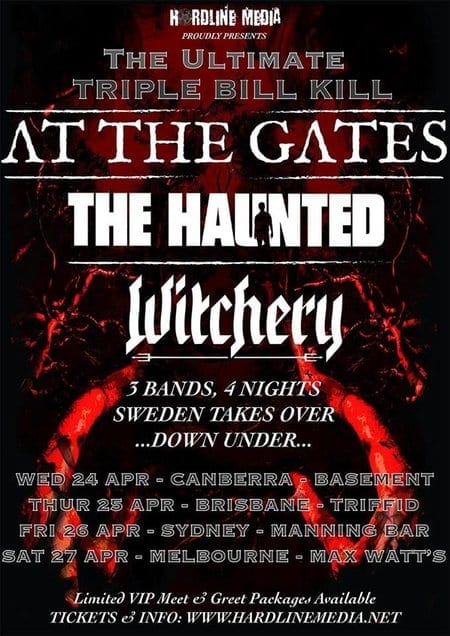 Australia was last week privileged to have the honor of hosting what was known as the Triple Kill bill. Witchery, The Haunted and At The Gates. All three need no introduction as between them they have all released classic and important metal albums that are revered the world over.

But let me say this, it truly wasn’t just a triple bill by any means. More a quadruple affair with legends of Melbourne’s Death/Thrash scene In Malice’s Wake warming up the fast thickening hometown crowd. Let’s be honest. Could a better evening opener been chosen? I think not! IMW have been around for a long time now and are still as relevant and incredible now as they have always been. With thousands of touring K’s under their belts and numerous albums, Shaun, Mark, Leigh and Karl are completely comfortable in commanding and bringing their audience and fans to attention and Saturday night at Max Watts in Melbourne was no exception. Consummate metal warriors and commanders of their craft In Malice’s Wake, although the doors opened as IMW took to the stage there was but a handful of punters for them to perform for, but, spilling in quickly, fans congregated towards the stage and moved to their unmistakable and clearly recognisable thrash metal brilliance.

Band number two and time for the Swedish takeover to begin. On stage we welcomed Witchery. Having been a fan of Witchery for the past 21 years since the release of their killer debut Restless & Dead and their sophomore album (both EP and album) Witchburner and Dead, Hot and Ready I was more than ready to see them for the first time. From the moment Jensen, Rickard, Sharlee and Chris strode onto the stage, Melbourne’s hungry death metal fans were more than eager to throw their horns into the air and heads violently up and down. And then corpse paint adorned frontman Angus takes his place in front of the congregation it was time to unleash. And that we did. Opening with the first two tracks from their latest album I Am Legion – “Legion” and “True North” the night was Witchery’s to command and ably precede those magnificence of the two bands that would proceed them. Closing with “Witchburner” and “The Reaper” from their still killer debut album, Witchery were an absolute pleasure to finally see perform and we can only hope that they don’t leave it so long to come back and headline.

So where next from here? Well, simply The Haunted. Without question The Haunted are a tyrannical death n’ roll armageddon of unrelenting, unapologetic, in your face heavy fucking metal. It must be said here that due to unforeseen circumstances, the bass player for both The Haunted and At The Gates, Jonas was unable to perform on this tour but did manage to provide a backing accompaniment and during various tracks throughout both sets, many songs were filled in by guitarist from each band, which overall just provided something a little special for both the crowd and clearly the bands themselves. But tonight’s lack of Jonas did little to upset the audience or bands because, if you’re a fan of The Haunted you’re all to well aware of the presence and ‘No Fucks Given’ attitude and delivery that has always been prevalent in the style and approach of The Haunted’s live show.

What was truly great to watch was Marco Aro’s absolute, love, respect and gratitude at performing for his crowd and their receptiveness, to hearing live and bearing witness to a band that, whilst they’re are absolutely confronting and brutal want nothing more to gift the gift of release for their audience. Having been around for the better part of twenty one years, there is more than enough material for The Haunted to choose from in order to entertain a sold out, rabid, Melbourne Max Watts crowd and pretty much all their releases were represented, but I will summarize by saying that The Haunted’s Melbourne set was perfectly categorised by their show opener “Brute Force” and closed by the absolute crowd favorite “Hate Song”.

So lastly, if ever an evening as grandiose and massive as the Triple Kill bill needed a worthy and honorable headliner with a massive Swedish representation, then of course At The Gates would be the first and only choice. This is their third venture to our shores, all of which I have attended and every time it would seem that the two Jonas’ (sans their bass player this time around as I have discussed already), Adrian, Martin and that unmistakable voice of one humble and incredible Tomas Lindberg just fail incessantly refuse to weary or mellow in their intent to remain at the top of their game. Showing now, even after a hiatus, that At The Gates are just as important now, courtesy of their latest killer album To Drink From THe Night Itself to when the changed the game and upped the ante of heavy metal composition with their still amazing album Slaughter Of The Soul, much of which has been debated and pondered over for many years now. But in all honesty an At The Gates live performance is always all about them giving their loyal fans a no nonsense straight up death metal affair. No bullshit and no pretense. Beautifully prepared the opening to their set was the title tracks from their past three albums, being, “To Drink From The Night Itself”, “At War With Reality” and the instantly recognisable “Slaughter Of The Soul”! What a fucking monstrous way to start their set right? I guess you had to be there! And it was those three albums that At The Gates drew their evenings content from, but they most definitely seemed to bring out the best in their audience when playing the likes of “Cold”, “Under A Serpent Sun”, “Suicide Nation” and “Blinded By Fear” which bled into At The Gates’ far too early evening closer “The Night Eternal”. The set was done, In Malice’s Wake, Witchery, The Haunted and At The Gates went above and beyond tonight in their effort to make their last show in Australia one to remember and every single punter present at Max Watts tonight can not of left disappointed not only by what we heard but because every single member of every band came and hung out with the crowd and were incredibly humble and approachable without the need to make fans fork out more for the meet and greet bullshit!