An Evening with DEVIN TOWNSEND – Live at The Thornbury Theatre, Melbourne 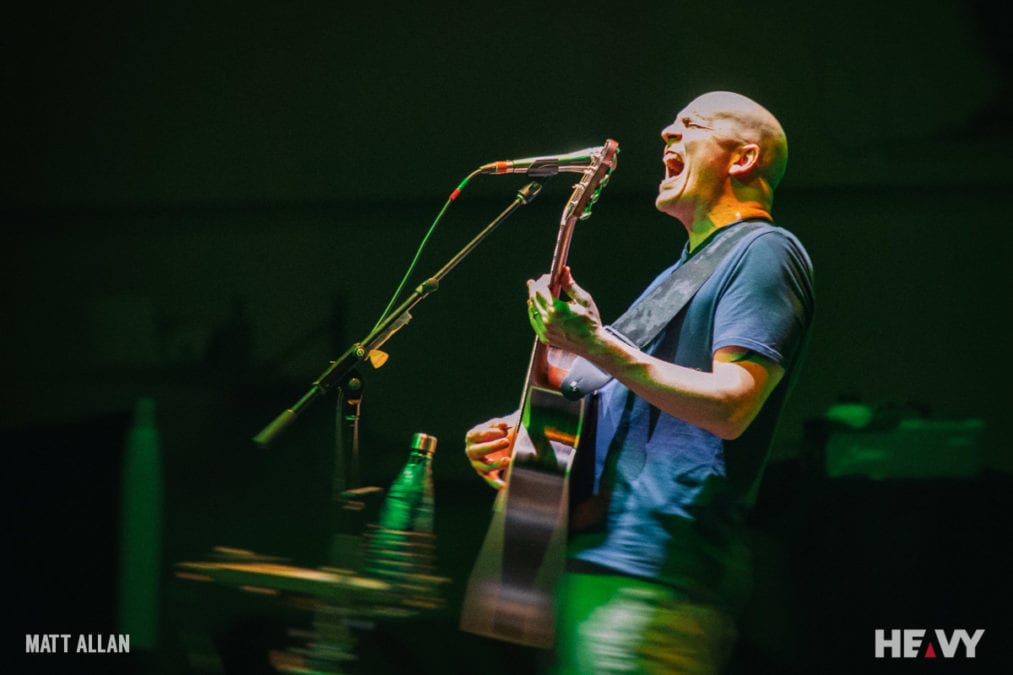 There’s something so special about spending an evening with Devin Townsend. Tonight’s sold-out show in Melbourne at The Thornbury Theatre was something more than special though. It was an intimate up-close personal get together with The Dev and a few hundred others that witnessed a creative genius at his near vulnerable best.

Tonight was not only an acoustic show but also a Q&A session.

A two and a half hour gift that went by way too quickly. All present could have easily sat engaged in Townsend’s enigmatic, albeit anxious self for another two hours or so had we of had the opportunity.

First things first, I have seen Devin many times and I am infinitely familiar with his music, life and many other things. But what struck, not only myself but many others in the room this evening was witnessing in real-time how Devin functions with an intricate insight into the inner workings and musings of his incredible mind. There were points throughout the musical portions of the evening where Dev unapologetically went on random tangents which cohesively yet chaotically made sense of who this man truly is. We all, as Devin fans just get it and went along for the ride. He truly captivates and speaks to his audience in an anxious yet spirited way that few artists in his artistic field can. 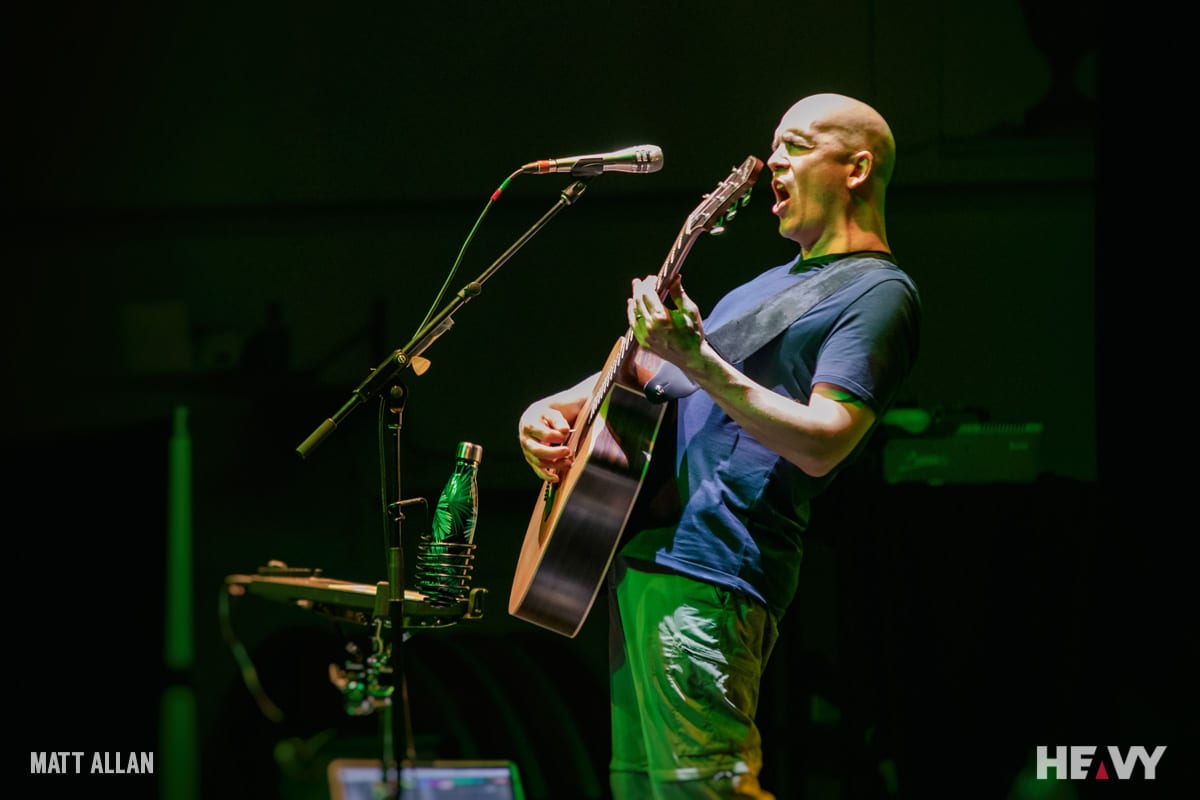 So tonight was split into two halves with songs and Q&A. Giving us a mix of eleven songs which almost all were intertwined with an inner monologue and dialogue of a seemingly carefree and unapologetic Devin. Trust me, you had to be there to comprehend it! The first half consisted of songs such as “Deadhead” from Accelerated Evolution. Hearing Dev’s angry inner self screams the lines “You are so vicious, I can take it” with nothing but his acoustic guitar was heart-stoppingly mesmerising. Words can not adequately articulate the profound and crushing impact it had on the audience. “Funeral” from his undisputed masterpiece Ocean Machine was next and if you are familiar with Biomech then you will acknowledge and appreciate how beautifully it was performed in the perfect manner of which it was created. With grace, passion and purity. Next was “Hyperdrive” which appeared on both Ziltoid the Omniscient and Addicted which was definitely not only a clear crowd-pleaser but also one of the songs that just clicked personally with Townsend this evening because at its conclusion he had a big shit-eating grin on his face and shouted to both himself and his captivated audience “GOD I LOVE PLAYING MUSIC!”. 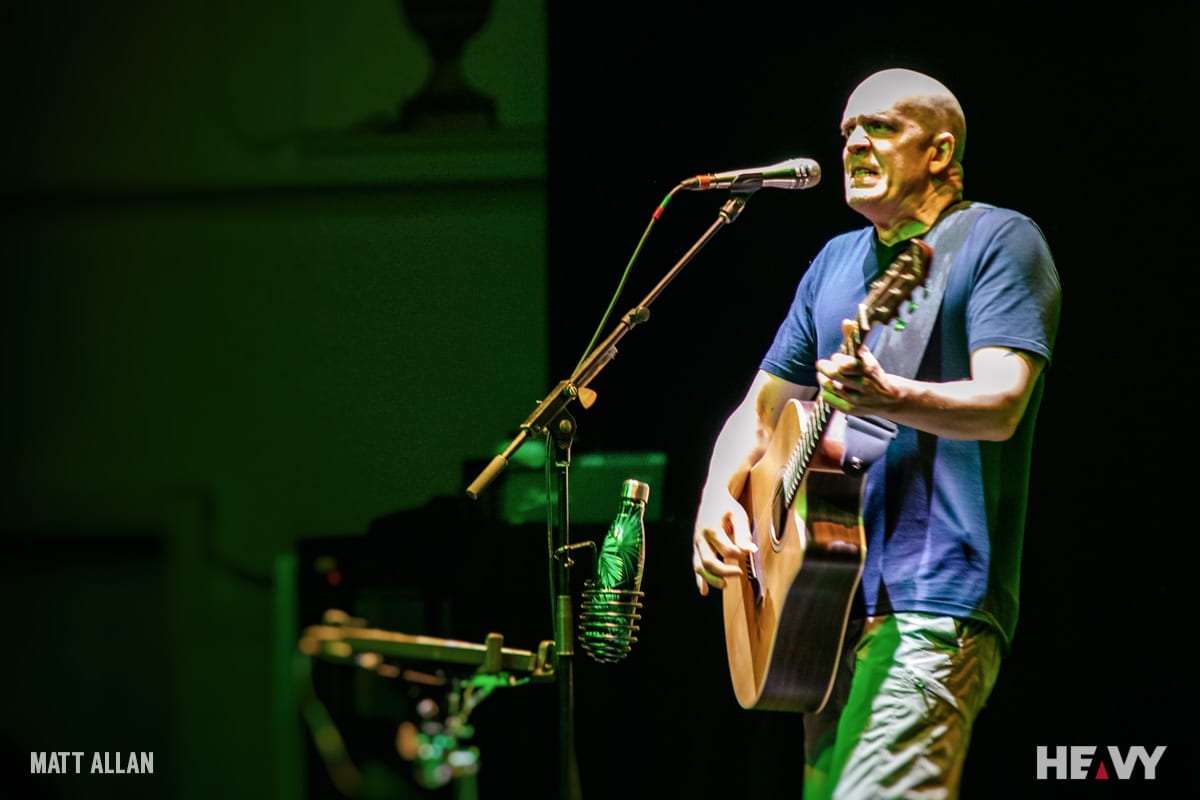 Proceeding “Hyperdrive” was “Why” from his latest album Empath. Which, stripped back from the operatic and theatrical version of the album version was enticingly the segway for “Ih-Ah” off Addicted, which sent shivers down the audience’s spine. And from there…A Strapping Young Lad song. WHAT? I hear those of you that weren’t present hark! (Insert Ziltoid’s voice here!) “YESSSSSSSS, INDEED!” At this juncture, the crowd were surreally presented with a Devin invoking his innermost evil Johnny Cash self as he played “Love” off Strapping’s 2005 album Alien. “Love” was challenging to digest being such a massive SYL fan, but, country influence and all aside (I mean he did release Casualties of Cool) Dev in all his creative prowess and excellence managed to make it work beautifully somehow, as difficult as those hardened SYL purist fans may have found to comprehend. The version of “Love” heard only on this acoustic tour was one of those, “You had to be there” moments. 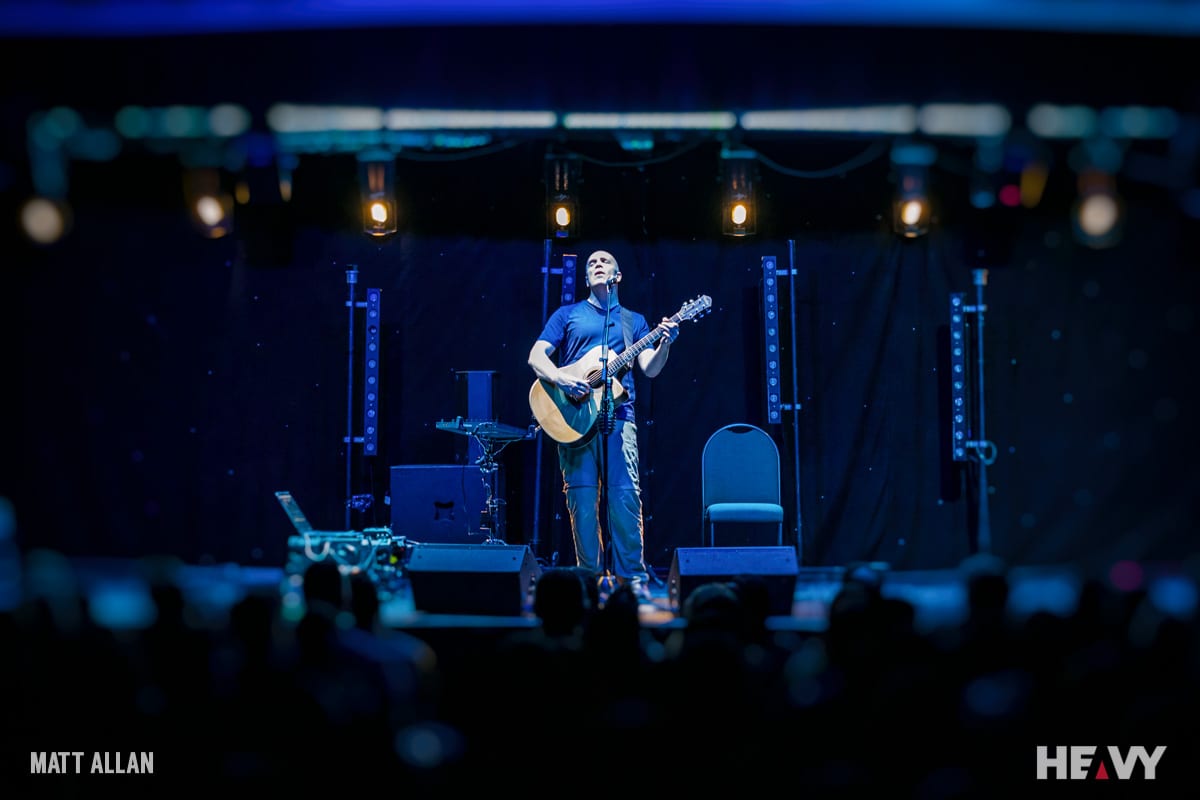 Of course, previously mentioned we heard “Hyperdrive” from Ziltoid The Omniscient this evening, so the next to follow was “Captain Spectacular’s” contemplative reflections of “Solar Winds”. The highlight for me was next with Devin playing the closing track off Ocean Machine – “Thing Beyond Things”. I could easily have forgone the rest of the evening and left a happy individual after hearing what is one of my favourite Townsend songs. It was a beautiful and captivating rendition that almost brought a tear to my eyes.

At this point, a Dev decided to read out and answer the first few questions courtesy of the audience. Ranging from topics such as if and when we’re going to be hearing a new Casualties of Cool album, what are his favourite songs to perform on this intimate up-close tour amongst other random thoughts of the crowd. And Devin being the absolute gentleman he is who is never lost for words, opened up his mind and soul with uninhibited poignancy, grace and perfectly articulated clarity.

A short intermission followed then it was back into the theatre to hear a mere two more songs being “Coast” from his Ki album and finishing the night with the absolutely fitting “Life” again from Ocean Machine. Of course the second part of the night included more Q&A with questions about Devs reluctance to do meet and greets due to getting ill on his last tour, his acoustic guitar rig setup for the tour, to keeping his voice in shape and how he managed to find a technique which maintained his voice at a time when his main style was, in his words “screaming until he could taste blood”, when starting out singing for Steve Vai.

There was more included for us present, graciously pecking at the mind of Mr Devin Townsend but alas, all good things, no matter how perfectly captivating must come to an end and this intimate one-off affair with Devin did, with the crowd closing the night for him to a standing ovation which gave him goosebumps which I am pretty certain his audience shared with him. A rare special evening this was which will never be repeated for which those of us present, sharing the same small space at the Thornbury Theatre with Devin Townsend will be eternally grateful. 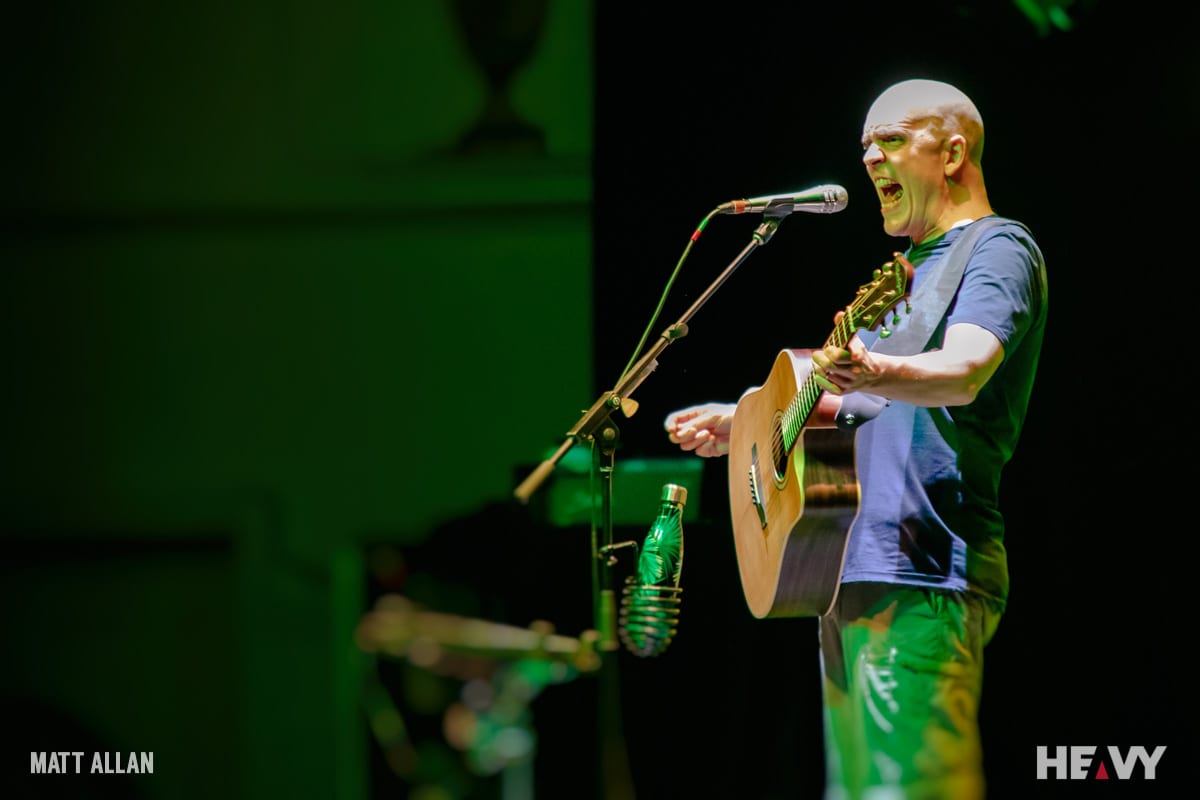