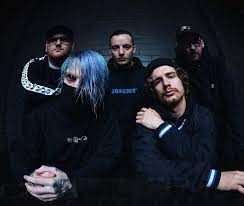 The New Year is set to start in a blaze of glory on the Australian festival calendar, with Full Tilt preparing to unleash their first event of 2022 at Eaton’s Hotel in Brisbane on January 8 before the travelling musical extravaganza heads to Adelaide on January 29 then Sydney on February 26 before finishing up in Melbourne on March 26.

Full Tilt is a celebration of Australian bands and music, covering genres ranging from rock to punk to metal and everything in between.

Spearheaded by Northlane, all four shows will also feature Thy Art Is Murder, Frenzal Rhomb and In Hearts Wake with a variety of local outfits completing each line-up.

Today we speak with Sabian Lynch from Alpha Wolf.

S.L: Never play again?! Our set is going to be so sick that we’ll have to be on every other year also, but yeah, we’re very excited to be a part of the first Full Tilt festival. We can’t wait to experience it.

Full Tilt is happening on January 8 in Brisbane. Will your New Year’s Eve hangover be gone by then?

Speaking for myself, I’m not a big drinker, so I’ll be sweet, can’t say the same for backwards cap John though, he’s very mischievous, and I’m sure I’ll hear about the hangover

Keen to watch JFTD rip it up as usual and keen to check some of the fresher bands get their first taste of the big crowds and see how they work it, something about watching nervous bands shitting themselves backstage and then absolutely smashing it on stage is a bunch of fun.

I’m going to fart on Yours Truly’s bassist

Currently, preparing my fart now, nothing but maccas and Rockstar Energy©

Full Tilt has a great blend of rock, punk and metal on the line-up. How important is having that variety of genres on a festival bill?

A wide variety is perfect, I don’t know anyone that strictly only listens to the heavy, I want to catch some pop punk and then some Thy Art destruction

What survival tips would you give the fans?

Get into the ballroom early if your favourite band is playing that stage because not everyone will be able to have entry once it fills up! Also drink water, water is sick.

Plenty of sleep and bring only good vibes, and PLEASE don’t mention C****19