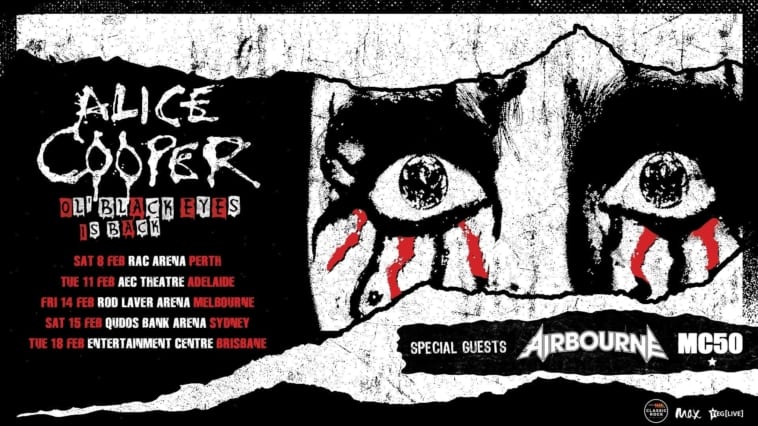 There were probably some seventy-two year olds in Melbourne last night tucked up nicely in bed by 7.30. There were probably some others trying to work out whether or not they should wear the red or beige cardigan tomorrow. Then there was one seventy-two year old man named Alice Cooper. He was taking centre stage at Rod Laver Arena, rocking out like a man half his age with a hard rock that has to be seen to be believed… oh and he had some giant babies, masked psychos and a huge Frankenstein with him.

Yes as Melbourne can attest to this morning age has certainly not wearied Mr Cooper at all. Sure he isn’t jumping off speaker stacks any more but he can certainly still bring his audience one hell of a show… and that was something that we were all a witness to last night.

By the time Cooper hit the stage last night the audience was already pumped to the max. Victoria’s own Airbourne had already seen to that. If you have never seen the lads from Warrnambool live then you have really done yourself a disservice. How these guys aren’t already as big as their mentors AC/DC is beyond me. Their catchy tracks delivered with electric ferocity live is something any serious music fan must see.

Last night the lads certainly delivered. At one point they had Rod Laver Arena resembling London during The Blitz as air raid sirens sounded and search lights darted this way and that. The highlight of their set though was when Joel O’Keeffe left the safety of the stage during “Girls In Black”, ran through the crowd and then scaled the banister of level 2 all while still playing guitar and not missing a beat… you want showmanship – you certainly get it with these guys.

That showmanship then continued with Mr. Cooper himself. Not to be outdone he brought his very own Nightmare Castle set with him. A set complete with chandeliers, two levels and more fire torches then on the set of Survivor. But if you thought the set was impressive that was nothing compared to what happened when the music started.

Cooper is now at a point of his career where three generations of fans now turn up to his shows. A quick look around the arena last night and it was very easy to see those in their sixties still decked out in their early Cooper T-Shirts, people my age who also got into the legend’s music through their parents album collection and then the younger generation just as eagerly excited as their parents. There was even one primary school aged kid their last night wearing a jacket that not only boasted an Alice patch, but also patches for Soilwork and Kreator… respect young Sir, respect.

None of those three generations would have left Rod Laver last night disappointed as Cooper once again delivered the showmanship and brilliant live show that has seen him at the top of his game for 50 years. The true testament to how well the show engaged with the audience was that not only did the fans sing along with the hits like “I’m Eighteen,” “Poison,” “Department Of Youth” and “Schools Out,” but how that singing continued even with slower tracks like “My Stars.”

The last time I saw Alice live it seemed like the theatrical side to his show had died off a little, last night he proved that wasn’t the case though. Last night he had a masked psycho kill fans who ‘invaded’ the stage during “He’s Back (The Man Behind The Mask),” his bloodied bride appearing during “Rose On White Lace.” Then of course there was the epic performance of “Steven” and “Dead Babies” ending with Cooper being put to death before ultimately returning to the stage.

An Alice Cooper show though is just a glorified Dracula’s performance though. No, Cooper has surrounded himself with one of the finest bands in the world. When you have Nita Strauss, Tommy Henriksen and Ryan Roxie delivering the goods like they did last night on guitar and then joined by Glen Sobel who delivered a literal ground-shaking drum solo on “Black Widow Jam”, then your band is something pretty special.

Perhaps though my highlight of the night was Cooper himself picking up the harmonica and playing soulfully alongside his band as he brought a haunting sound to the very catchy “Fallen In Love”. If there was anybody out there dumb enough to suggest that Cooper’s time is up, then that was the time that showed it certainly isn’t.

Cooper last night showed Melbourne that there is still life in ol’ black eyes yet. A stunning band, entertaining theatrics and tracks that had people singing along all night, that is all you really want from a show like this. Perhaps Joel O’Keeffe best summed it up last night when he said “As long as I’m still alive, as long as you’re still alive, rock ‘n’ roll will never die!”