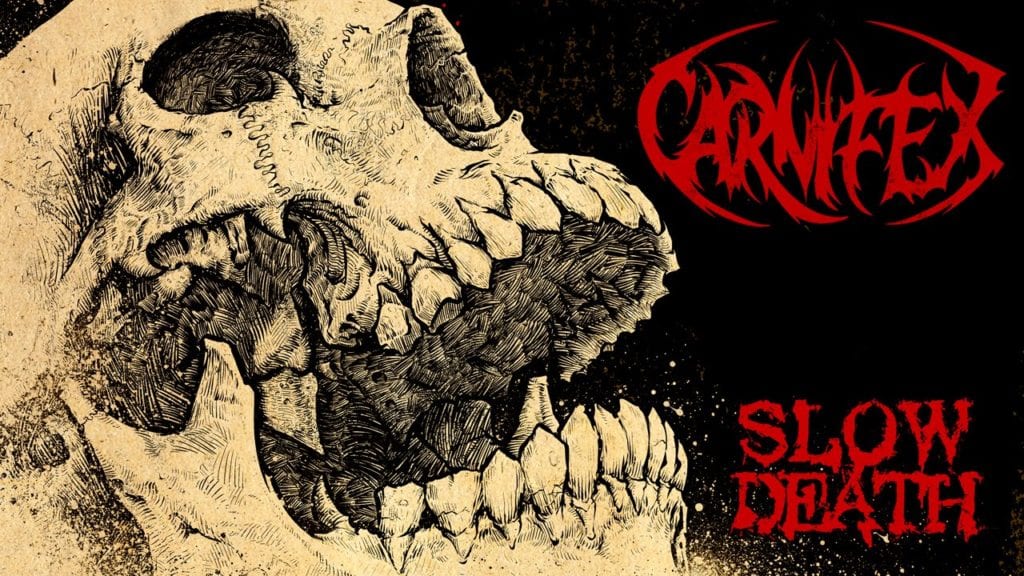 Nothing sets the tone for an impending massacre like a quiet crescendo of orchestral music and piano, and the lead-in to the sixth offering from Carnifex, Slow Death, adheres to this principle well.

From a moody, atmospheric intro almost lulling you into a false sense of security, the album roars to life with Dark Heart Ceremony, an absolute behemoth of a track that threatens to rip your heart through your ears and hand it back to you completely devoid of life.

Leaning back more to the stylistic sound of Dead in my Arms, Slow Death is such in name as in sound, with lashings of piano and as well as electrical components used to good effect and softening the blow somewhat between the overall ferocity of the album.

The title track continues in the same vein of being dark and relentless before the one-two punch of Drown Me In Blood and Pale Ghost leave you breathless just at the halfway mark of the album.

Exhibiting haphazard tempo changes and regular guitar solos, Carnifex have laced this album with malevolent intent and leave you in no doubt of their musical intentions with a solid release that puts the death back in deathcore.

Life Fades To A Funeral, an acoustic effort with only gentle guitar throughout, seems to act almost as an interlude before powering into Countess Of The Crescent Moon, and a song such as Life Fades..., while being a risky option in the face of the fierce nature of the remaining nine songs on the album, surprisingly works well.

Carnifex isn’t trying to reinvent the wheel, but are more so attempting to solidify its base, and in Slow Death have raised the bar for future releases, one notch higher.