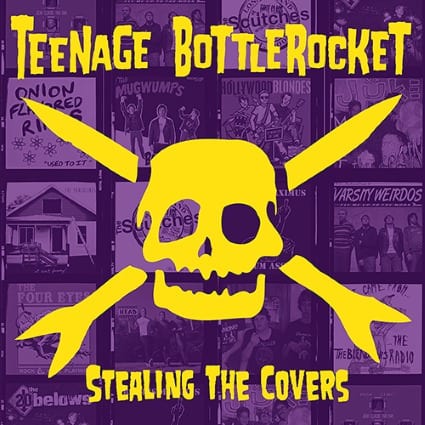 Stealing the Covers by Teenage Bottlerocket is a brilliant release and it’ll garner the band many new listeners, especially for lovers of catchy, pop-punk rock. It’s the seventh album from Teenage Bottlerocket, and about the third on label Fat Wreck Chords: owned by Fat Mike of NOFX, and home currently to bands like Frenzal Rhomb, CJ Ramone, Me First and the Gimme Gimmes. Wrap your ears around this now!

As the press for the album says of Teenage Bottlerocket’s sound: it’s ‘frenzied and fun-filled’, and really, there’s not a better description! Every tune is great and catchy; and even if some had a sad sound, you’d still want to sing them aloud, and dance or slam around your house or the dance floor. Think syrupy 50’s tunes but a little edgier: not really metal, but songs to rock out to. You could play them for your mum, sister and brother perhaps if so inclined, and share your good time. They might think you’re still weird but have fun with it too.

Here on Stealing the Covers, Teenage Bottlerocket cover 14 songs from unsigned and obscure bands that have grabbed their attention over the years of touring and supporting (or being supported on many stages or tunes they’ve heard). Cool twist, isn’t it? Instead of covering fave hits we all know, they’ve brought us tunes that many will come to love but stamped with their tinge of pogoing punk rock on tunes loved by them. The result is possibly as great as new original work of their own could be – well it is, really. But it may also garner the original composers some fans who might go back to see where these came from. A quite unique, great idea and name for the album. Many have been ear-worming their way to the brain of this reviewer for the past week and will live there and on my sound systems for a good chunk of time to come. It might follow up the originals of a few of the tunes, as well.

It’s hard to not find a good tune on Stealing the Covers, but to mention a few of the great tunes – start at the beginning with the first two, the “Way I Know” by the Varsity Weirdos and “Back and Forth” by Hollywood Blondes because solely they’re cool tunes: catchy foot tapping tunes with harmonies; as are the rest of these, but they have extra attractions of fun, rude words to sing out loud – “Shit Fuck God Damn” by Artimus Maximus; silly songs like “Hat Nerd” (The Four Eyes) and “Why the Big Pause” by The Punchlines. I further love the lyrics of track 8, “Gay Parade” by The Gullibles: “Riding my rocket ship through the gay parade…” just because.

Grab this album if you’re looking for a slight relief from your bone crunching metal or you love punk rock. You can’t go wrong. Stealing the Covers by Teenage Bottlerocket rocks out!