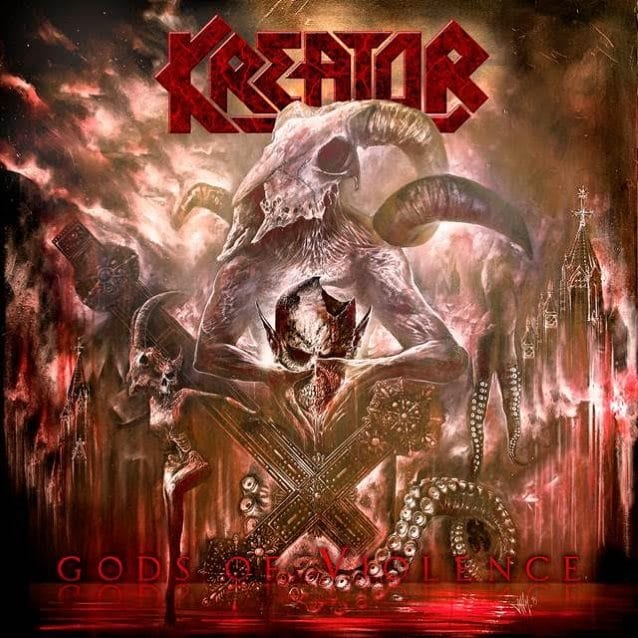 After reading our review of Kreator’s upcoming album, “Gods Of Violence”, head over to the latest edition of HEAVY Digi-Mag #19 and read our exclusive interview with Mille Petrozza. 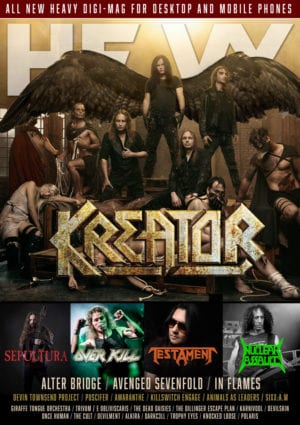 According to vocalist Mille Petrozza, “Gods Of Violence”, Kreator’s fourteenth album, has as its main goal to be “more exciting” with “everything put in there” than anything they have done before.

Thankfully, the band has succeeded on both fronts.

After experimenting with different sounds to varying success throughout the 1990’s, Kreator returned to their roots on “Violent Revolution” and have pretty much stayed there since.

They have retained elements of the death and industrial genres that they flirted with, but overall the thrash DNA is prominent.

Opening with the anthemic marching rhythm of Apocalypticon, Kreator shows a glimpse of their softer side, mixing brutality with fragility to ease you perfectly into the ensuing carnage.

“Gods Of Violence”, while not being a concept album, has as its core principle a representation of current events mixed with tales from Greek mythology and plunges you headlong into the world where your very soul may be at the mercy of the Gods.

World War Now ups the ante, with a ferocity and precision that captures the spirit of the bands thirty – four years in the thrash metal industry.

Totalitarian Terror, with its chaotic thrashing of drums before kicking in with Petrozza’s anger tinged vocals provides one of the many highlights as does ‘Army of Storms’ and ‘Side by Side’ with its frenetic and unrelenting pace.

Tracks like Lion With Eagles Wings with its haunting intro before an all out aural assault that threatens to pierce the very fabric of nature, and closer Death Becomes My Light, an eight minute epic featuring clean vocals and dealing with a near death experience, showcase a fresh and exciting side of the band proving Kreator, after all, these years, still have a few surprises in store.