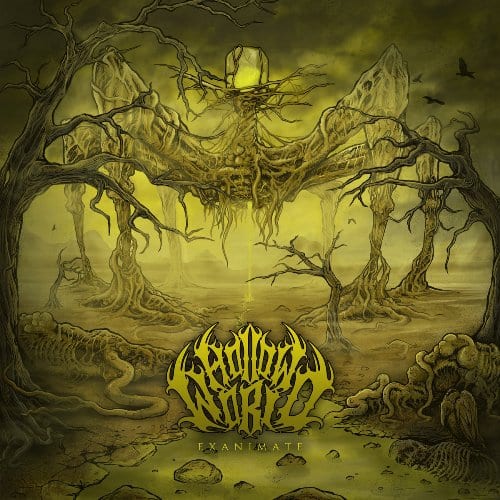 Dear readers, my utmost and sincerest apologies for allowing this album that I am about to review to have lingered for far too long forgotten amongst the piles of greatness on my desk.

I am referring to the incredible album known as EXANIMATE by the magnificent Hollow World out of Melbourne. Released in March, what we have before us are eleven songs of brilliant devastation and delivered with the ravaging intensity of five blokes locked in a cage fighting. All the while, writing some of the most ferocious and amazing metal that is noticeably defining not only Australia but quite clearly Melbourne as a force in the worldwide metal community

Sure, there is clear evidence of melodeath and the likes of Hollow World popping up frequently across this great wide ball of mass we inhabit, but I think that what sets us and their comrades such as Hadal Maw & Behold The Defiant apart from the rest of the world is our ability to take any and all influences and somehow craft it into our own sound and replicate and record that onto the albums. That, and the incredible energy and presence Aussie bands exude on stage. Hollow World is no exception, and if you have witnessed one of their live shows, then you will be very aware of what I mean.

The last time I had a chance to see them was supporting the great Fleshgod Apocalypse at Max Watts in Melbourne. What blew my mind was the ability of vocalist Ben Roberts to command his captive audience and hold them tightly in his grasp for forty short minutes, and the pulsating force of the unifying entity that is Hollow World both beside and behind him. Fast forward to me sitting here and listening to Exanimate over-and-over again, and reliving that incredible show along with this band’s ability to replicate their live show almost flawlessly to disc.

The unity, bond and crushing rhythmic alliance that is Hollow World and hurled unrelentingly at us via Exanimate is a glorious thing to bear witness and listen to.

From the moment we are lulled into a false sense of ease and comfort on opener “AGARTHA”, we are thrust head first and willingly into the brick wall that is “Defiling Paradise”. A nd for the next thirty-six minutes, guitarists Michael Truscott & Theo Goslett, Josh Hynes on bass, Michael Hodgson on drums, and that throat of Ben tie us to the back of a ute and floor it: pummeling us with whatever is beneath and in front of us. “Patient Zero” is an absolute stand-out track for me and worthy of your attention, not forgetting the two official clips “Wildfire” & “Defiling Paradise”.

There has most certainly been some quality Aussie metal released so far in 2017, but if you were considering parting with some hard earned then Exanimate courtesy of Hollow World is definitely worthy of what you have. 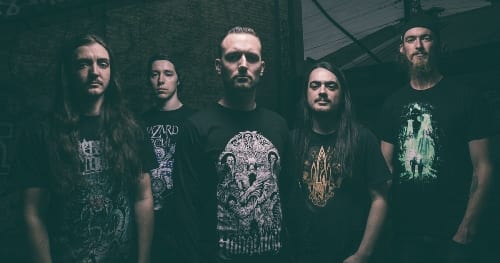