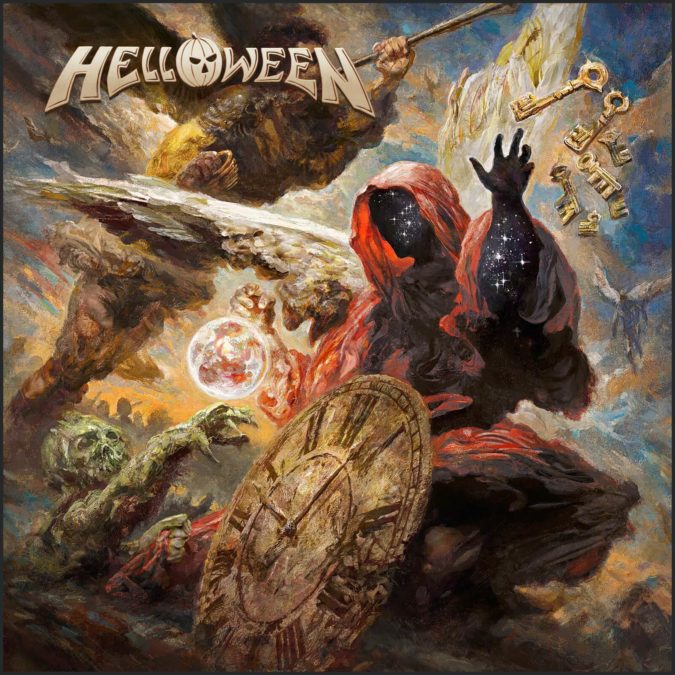 Dreams do come true — and when there’s a united force, a collective unison of postulates calling for something to eventuate, something always glorious occurs.

From this tour a live album and DVD/Blu-ray, titled “United Alive” (2019), were recorded in Madrid, Spain. They also headlined the mighty Wacken festival. Here’s a piece of that if you missed it:

Helloween’s “Helloween” (not to be confused with the 1985 EP release of the same title) will be released on June 18, 2021. It celebrates the band’s thirty-five-year career and is their first album since May 2015’s “My God Given Right” was released. The difference this time is that Kiske and Hansen accompany Deris on vocals.

Correct me if I am wrong, but Helloween are the first band in the history of bands to not only tour globally but to release an album with three lead vocalists — all of which were the frontmen of the band at some time.

Up to this point, we Pumpkin Heads have been teased with two singles from the forthcoming album, which clearly have not disappointed fans.

The first track was Skyfall, accompanied by an incredibly visual clip that tells the story of an alien who’s fallen from the sky to Earth during a dramatic spaceship chase. The song starts with the familiar and stunning voice of Kiske, which eventuates into Hansen’s, followed by Deris’s. Together they rescue the cute little alien from Hanger 18. Skyfall is the longest song on “Helloween”, capping 12min and 11 seconds and has tones from early Helloween’s “Walls of Jerrico” (1985) and “Keepers Of The Seven Keys Part I & II” (1987 & 1988).

The second track released was Fear Of The Fallen, which is gently lead by a soft melody of guitars and Andi Deris’s voice at the intro but speeds up to a fast sing-along tune — if you can keep up. A few melodic dips but much of Fear Of The Fallen is speed-metal in pace with swapping guitar solos and head kicking drums to back them up.

But that’s the first two songs, which you’ve probably already played over and over. So what of the rest of the album? Does it hold up?

Of course, it does.

This IS Helloween. Even with a couple of almost off-centre, out of the “normal vein”, somewhat ecliptic releases, “Pink Bubbles Go Ape” and “Chameleon” – which in themselves are wonderful, there hasn’t been one bad release in the band’s history. So, why would this be different?

This first song on “Helloween” follows the same tone of  Fear Of The Fallen in that it’s fast and energetic, even though Deris wrote it. Out For The Glory was written by Weikath, and of course, he adds his own touch of cooky sense of humour to it.

Track 3 is slower, but it ain’t no ballad, that’s for sure, Best Time is more of a fun, positive mood-boosting song written by the youngest member of Helloween, guitarist Gerstner.

Mass Pollution would have fitted well on the “Rabbit Don’t Come Easy” album in terms of style. Written by Deris and Grosskopf, it’s a rocker.

Then we have Angels. It’s certainly the song that stands out from the rest. There’s the hauntingly entrance with Kiske stating, “I had a dream about forgiveness. But I hear the angels say…”. It has an older Helloween vibe flushed with a modern Kiske tone.

Okay, this is the track you’ve been waiting for. You wanted an “Eagle Fly Free” type of song, right? You go it. Rise Without Chains. One word: Banger.

Now, for some hard rock, much like a song off “The Dark Ride” album, Helloween has this great sing-along-fist-raising song called, Indestructible. Mostly sung by Deris, Hanson breaks it apart with a vocal lick, “Cause we are one!”, backed by Kiske howling, “We’re indestructible!”.

Robot King is another Deris sounding song; I guess you could say, a modern-Helloween sound but with Kiske taking it to a new level.

And then there is Cyanide. It’s the shortest tune on the album and sits at number 9 on the tracklist. It’s yet another Deris/modern-Helloween sounding song. It’s okay, but no standout.

Kiske is back leading the next one, Down In The Dumps with Deris backing him up. It’s another fast hard rock number with thundering drums.

Orbit is a 1:05 min interlude before the mighty Skyfall kicks in which rounds up the whole album nicely.

In summary, what is “Helloween”?

It is essentially a mix of all Helloween albums in one. You have classic power metal, hard rock, speed metal and good ‘ol rock n roll all mixed into 12 songs within a duration of 65 minutes.

It would be impossible for “Helloween” to be a flop. It has EVERYTHING that is Helloween. Therefore it’s is aptly titled.

What’s not to love about Helloween? They are technically perfect; their lyrics touch on serious life matters such as the oppression we face over Mankind and other subjects are fantastical or science-fiction based. But yet, they also humorous; and so damn entertaining. And now there’s three singers and three lead guitarists!

Pumpkin heads ARE UNITED and shall not fall.

Helloween’s “Helloween” (not to be confused with the 1985 EP release of the same title) will be released on June 18, 2021 via Nuclear Blast.