DEATHWHITE ‘For a Black Tomorrow’ 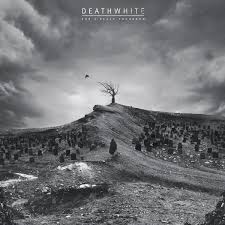 As a lover of heavy and extreme music, I am always waiting for something new and breathtaking. Something that is so beautiful and perfect in all its heavy magnificence that when I cast my senses across its beauty and musical artistic excellence I can and will not be silenced in telling everyone I can how incredible said band is.

And that is one thing I love about having the soapbox to stand proudly upon writing for Heavy Mag and doing my Ministry of Metal podcast. I have the opportunistic platform to promote openly these bands and their albums. Last week, as I was trawling through the plethora of upcoming new releases I stumbled and skimmed upon a press release by a band that mentioned influences such as Katatonia, My Dying Bride, Anathema and Paradise Lost to which my attention was immediately captured and I pledged wholeheartedly that I must have this album in my life.

So, where to begin? Firstly the name of the band is DEATHWHITE who hail from America and the name of their near perfect and faultless debut album is titled For A Black Tomorrow.

I was mesmerised and fell victim to DEATHWHITE the second the opening track “The Grace of the Dark” kicked in. But it was at the 35 second mark into it that I was gripped wholly when the vocals kicked in. That was my “Oh my fucking God” revelation when I knew without doubt this album was going to be more than I think I was ready for.

I will say here now before continuing that at the end of DEATHWHITE’s press release that it clearly states ‘LINE-UP: The band does not provide line-up information!’

So…here we have another band, that have chosen to conceal their identities for whatever reason so let it be known that henceforth I am forced to give them their own identities and they will be as follows on vocals it’s Vox Grandeur, on guitar it’s Note Aficionado. (Best I can come up with at 2am on a Thursday morning!) So, back to the review. The opener kicks in with a heavy type grandeur not far removed from anything that Anathema, Katatonia or even Moonspell have given us, but it is the pinnacle 35 second mark where Note Aficionado drops into a melancholic sombre riff to soothe us and we are then serenaded for the first time by Vox Grandeur with vocals and voice so hauntingly captivating that the listener is instantly held firmly in the grasp of all that is DEATHWHITE and will be for the entire seductive forty four minute duration of For A Black Tomorrow. The Grace of the Dark is a test of the emotions and as a whole, structured and written so perfectly, Deathwhite know exactly their target audience and gift them a treasure to behold. The chorus is is something truly special and the way the four musicians work and flow together is flawless.

This album both is and is not the one one should listen to when in a state or mood of despair or sombre. It works as a shoulder to cry on and also an ear to listen to. Next is “Contrition” which kicks in with an up tempo guitar and drum respectively giving the listener a more positive vibe whilst Vox Grandeur delivers his cathartic and chaotic calming vocals that just cement our desire to feel good about feeling a little down. Which in my opinion is the running theme of the album, no doubt!

“Poisoned” kicks in acoustically then takes us onto a quicker heavier turbulence, when back down we are serenaded by Note Aficionado and Vox Grandeur in unison, playing and singing both of love lost and how a protagonist is left with a bitter taste if turbulent and poisonous moments in life. Like I said above, equally both calming and chaotic.

Next up is “Just Remember” which has an ebb and flow from heavy quick to heavy slow, almost doom is so perfect it’s hard to put into words.

And now we hit the halfway mark and the song “Eden” is a slower yet still heavy moment where, if the album couldn’t get anymore perfect, Vox Grandeur hits a peak vocally that embraces the listener, still cold and calming but more captivating than previously if one could think that possible, leading immediately into the track that is the first film clip from the album “Dreaming the Inverse”, (Holy fuck this album just keeps getting better even in its beautiful darkness!) which, if you care to view it, is a perfect visual reference to For A Black Tomrrow and its content as a whole. Here is one of the songs that is heavy in its melancholia from start to finish and very reminiscent of what one would expect from Moonspell. The cohesion of all parts in all made so perfect by the vocals and their delivery. The content yes may be bleak but in it I see a positive beautiful light meant to give us hope, no matter the of despair. Truly this album can be interpreted properly by listening to and immersing yourselves in both the song and video as a whole single entity.

Track seven is probably one of my favorite songs on For A Black Tomorrow. “Death and the Master”. Six and a half minutes long it is a turbulent tune that rises and falls in both harmony and beat and sets a scene perfectly for when at the 2min 02sec mark Vox Grandeur kicks in with the lyrics “Your bleeding heart, it cries through thy pain, it’s all you ever knew. Falling forever, without fail, there is no way out!” this album reaches a point although seemingly dark and void of meaning we as the listeners, involved and immersed in this world of a black tomorrow we may rise above the depths or holes we can’t seem to dig ourselves out of. There is hope for us all in even in those moments where the weight of everything may seem too much to bare.

Closers “Prison of Thought” and title track “For A Black Tomorrow” give summation to this journey by DEATHWHITE perfectly. And I feel I have used enough descriptors to give you all the means and purpose to immerse your entire selves to DEATWHITE’s superb debut offering and please remember, no matter how low things may be, feel or sound there is something so perfect and beautiful that is capable of guiding us all to a light where our clarity lies and that is For a Black Tomorrow.