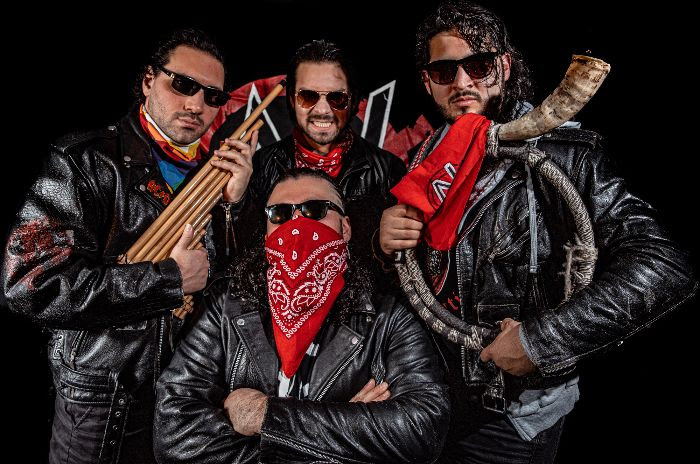 After moving to the USA from Chile in 2015, brothers Amaru and Roberto Fenoutt were quickly subjected to a side of life not glorified in the tourism brochures.

By 2019 they had formed Non Residents, a band that infused thrash, Andean rock, punk and Mapuche rhythms into a distinct sound of their own to give them a musical outlet to vent their growing frustrations.

The result is the recently released album Against Police Brutality which is a scorching slab of music dripping with angst and urging reform through means other than what is becoming increasingly more the accepted in their adopted country.

Amaru and Roberto joined HEAVY to chat about their music and living in the shadows of a system that is not designed for hope.

The band have openly declared Against Police Brutality as a metal album the world needs in the current climate, and we begin by asking why they think that.

“That’s more because we wanted to call it… not real metal, but something from the street and more down to Earth,” Roberto began. “Not like a fantasy or something, it’s more from experiences from day to day from each of us. It’s more sided to the punk, hardcore and thrash through the 80s”

Despite the confronting title, both boys stress the point that it is not a political album or one which focusses solely on the negative side of justice.

“Not really,” Amaru continued. “We put this name after we made the songs. By this the name is for the process of the album. When we made the album and recorded it all the stuff here in the USA like Black Lives Matter, and in our country too we have protests – there was a social uprising back in Chile when we were doing the album. Here had the Black Lives Matter with the police killing George Floyd, so all that process was involved in the album, but the song is not about that. More the processing moment when we created the album.”

In the full interview the boys run us through the musical direction of the album, the title in more depth, coming to America as an immigrant and trying to make something of your life, the birth of Non Residents, mixing Chilean music into their art, new music already, coming to Australia and more.

PrevPrevious.Examples Of Why Life Is Truly Radical With EVERY TIME I DIE
Next.WILD GIANTS Drop New TrackNext