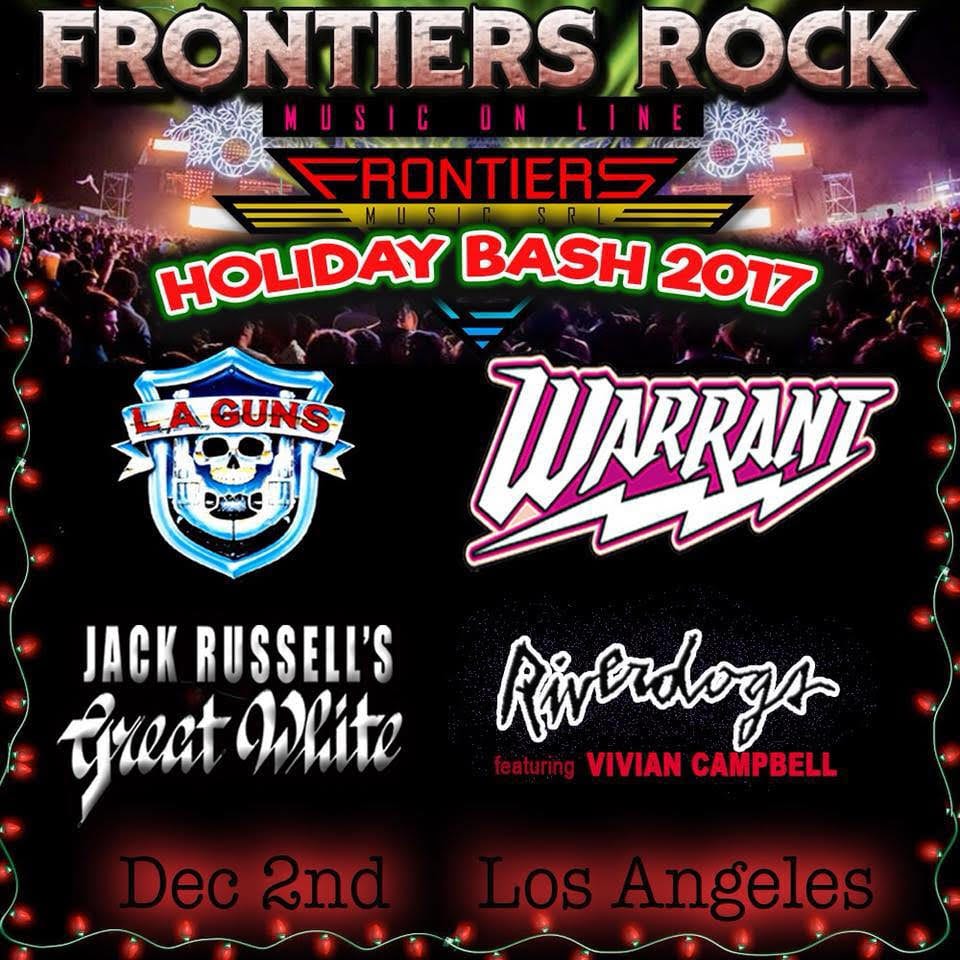 Frontiers Music Srl will be celebrating the holidays in style this year with the first annual Frontiers’ Rock Holiday Bash in Los Angeles! L.A. GUNS W/Tracii Guns And Phil Lewis (featuring the reunion of TRACII GUNS and Phil Lewis), WARRANT, Jack Russell’s Great White, and Riverdogs will provide the evening’s entertainment at The Canyon Club & Special Events Center on Dec. 2, 2017.
Doors open at 6 p.m.  Riverdogs, featuring Def Leppard guitarist Vivian Campbell, kicking off the festivities at 7:30 p.m. at the Canyon Club, located at 28912 Roadside Drive in Agoura Hills, Calif. Jack Russell’s Great White, Warrant, and L.A. Guns will follow. Ticket prices range from $30 for general admission up to $65 for a premium VIP ticket, which includes premium seating, a meet and greet with select artists, access to the VIP red carpet area, and a custom event T-shirt.
Founded by Serafino Perugino, Frontiers Music Srl was born in 1996 and is widely recognized as a premiere record label known for delivering quality rock music to fans around the globe. With offices in Naples, Italy and Nashville, Tenn., Frontiers has worked with a wide variety of artists including Journey, Whitesnake, Def Leppard, Sammy Hagar, Yes, Rick Springfield, Winger, Sebastian Bach, Ted Nugent, Stryper, Boston, and many more.  L.A. Guns, Warrant, Jack Russell’s Great White, and Riverdogs will all be celebrating new studio albums released through the label in 2017.
The concert is produced in partnership with Frontiers’ artist Keith St. John, former lead singer of Montrose and Lynch Mob, now with Burning Rain, and producer of Ronnie Montrose Remembered at NAMM. Known for creating unforgettable special events, St. John is excited to bring these Frontiers’ artists together on one stage for what will no doubt be a memorable evening.
After a 15-year break, Tracii Guns and Phil Lewis have reunited in L.A. Guns and have been touring non-stop in support of their upcoming critically-acclaimed new album, The Missing Peace, which will be out October 13th on CD/LP/Digital via Frontiers.
Warrant was formed in LA in 1984 and became one of the most popular hard rock bands of the early ’90s with multi-platinum albums and songs, maintaining their popularity throughout the decades. Warrant, with original members Erik Turner, Jerry Dixon, Steven Sweet, and Joey Allen,  joined by vocalist Robert Mason, are currently touring in support of their latest release, Louder Harder Faster, currently released by Frontiers.
Jack Russell’s Great White has been touring extensively, promoting their new record He Saw it Comin,’ which was released by Frontiers in January. Russell has one of the most distinctive voices in the rock genre and this album harkens back to the classic blues-rock style he is known for.
Riverdogs reunited last year to record their first new album with Vivian Campbell (ex-Whitesnake, Def Leppard) in 10 years. This is the band’s first announced live show with Vivian in more than two decades! This is a special reunion not to be missed.  The Riverdogs album, California was released in July by Frontiers.
Tickets available via Ticket Master.  Find us on Facebook, Instagram, and Twitter. For more information call 818-593-0135 or visit  http://frontiersrockusa.com/
Tickets On Sale Now: http://bit.ly/2g5SBRW