WITCHSKULL With A Cross To Deliver 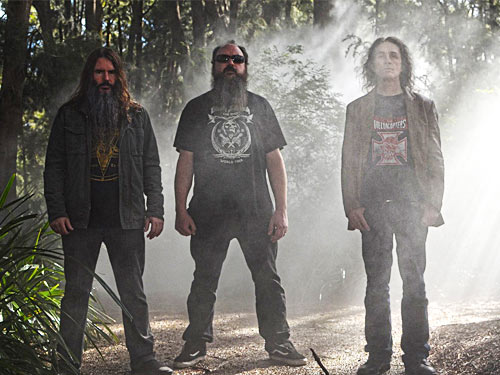 While some bands have gone into hibernation during the Covid-19 quarantine one band that certainly hasn’t is Canberra’s Witchskull. Not only has their latest album, A Driftwood Cross, been released during this period but when the ACT’s quarantine restrictions were lifted slightly the band managed to put together two very special and intimate shows at The Basement in Canberra.

“It is our third album,” says Witchskull’s drummer Joel Green as I have a chance to chat to him only days after the album had been released. “We have been really happy with the way it went. I suppose there are definitely similarities between this one and our previous two because I feel that all three of our records work pretty well and are reasonably cohesive but there are a enough differences there with each one so that you know that you are listening to a different record. We were lucky enough to be able to spend a little bit of time on it because we assumed we would be touring the last record overseas and that didn’t eventuate so we kind of just holed up in the rehearsal space and was able to focus on delivering a really good follow up.”

A really good follow up is a true understatement for just how good A Driftwood Cross is as an album and the longer time spent on it certainly shows. “Oh yeah I think so,” agrees Green when I ask whether the longer period of time being spent on the album saw the band have the opportunity to be a little more creative this time around. “We are a little bit older now. When we first got the band together we recorded an album in six months and we kind of said at our age we didn’t want to be spending three or four years between albums. I have always said that we should be looking to work hard and kind of put albums out more regularly.”

“We have only been going for six years,” says Green continuing. “So to be able to have three albums in six years is probably a little bit unusual in this day and age but it has worked for us.”

As I talk to Green more I soon learn that the deep themes explored on the album come from all members of the band. “That is probably Marcus’ domain,” says Green with a chuckle as we discuss the themes of the album. “But Tony our bass guitarist comes up with a lot of concepts and titles and what not but Marcus is the lyricist. For him he is into Ancient Egypt and a whole lot of other things including Gods and Goddesses of Ancient Egypt. So he kind of pulls all of that stuff together and he feels that that is a really personal kind of thing for him but he kind of writes the lyrics in such a way that anybody can interpret whatever they like into them.”

“But he is a really intelligent lyricist,” says Green as we continue the discussion. “If you read through the lyrics on all the albums you will see that he as a really unique spin on things. “You even get a bit of an education if you sit down and talk to him because Marcus is very well read and he has an amazing insight into history and where it is at. So I am constantly learning a lot when Marcus goes into one of his discussions on a certain topic. He is a very interesting fellow to sit down and talk to.”

After the Covid quarantine is over Green says the band do went to take that next big step and look at doing an overseas tour. “I think that is our next big step,” he says after thinking for a moment. “We need to take that step. I thought we were ready after the last album because we have a very good label behind us with Rise Above so I think we are old enough, we are experienced enough because we have played in a lot of other bands so I think we are ready to go over to Europe and the US and show them what we made of. It didn’t happen back then and I am not so worried about that because I just think that it will happen when it happens. The longer that it takes probably means that there are even more people that will know of us and that can come and check us out.”

While it may take a while before some of us do get the chance to see Witchskull live we can enjoy their music on A Driftwood Cross which is out now through Rise Above Records.