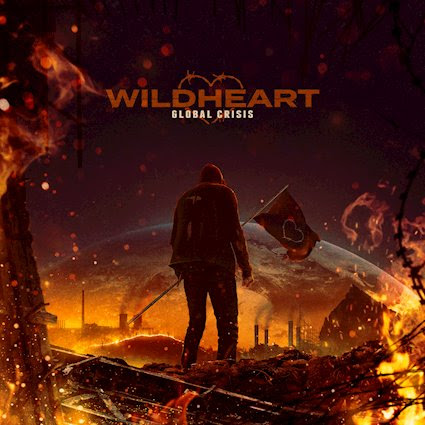 South-East Queensland, great place to live if ya don’t mind the odd hailstorm every second day this time of year. It’s enough to give ya the shits, and the odd dint in ya AU Falcon. Call it a Global Crisis if you must. I mean, why not? That’s what the South-East Queensland lads in Wildheart have called their debut album, an album full of truth and the unearthing of injustices … or so they tell us. Let’s see what they’ve got to offer.

A one-minute intro fades in with some static, strings and a sweet little delayed guitar melody. It’s very pretty, but then it gets devastatingly heavy when The Lucky Country kicks in. Does it Djent though, yeah it kinda does, but the odd filler melody and riffs poke through the guitars while vocalist Axel Best screams his tits out. The song does hit a slightly melodic chorus, but it’s just edgy enough not so spoil it. Enter token breakdown and the song starts to doom a bit until it settles again into a clean section for a moment before that melodic chorus kicks back in to end the track.

Something something about voiceless communities, aquatic life, the ecosystem, and animals and how we’ve fucked the place over in the last 100 years. Yeah, fair call! Backburner pulls the pace back initially before launching into a faster thrash-based riff. The drums and bass follow suit, and the vocals take off aggressively, slipping in and out between the riffs.

Another clean sung chorus ensues, and it’s actually pretty catchy. A quick little djent riff jumps in and take us into the second verse/chorus cycle of the song, and we hear a short guitar lead which takes us into the song’s outro.

Heartbreaker kicks off as a bit of a rocker, then pulls back the pace to a gentle sounding guitar riff which is completely lost under some ferocious screams. Multi-layered vocals fill the chorus with a mix of screams and clean vocals, and the song finally heavies up to the level of its predecessors for the song’s bridge. Oh, and then another clean bridge, and now a heavy bridge which brings us into a Chorus for the outro. At least, I think that’s how the song went. Interesting structure, which is not too weird that you get lost, and just unique enough that it keeps you listening.

It’s about time a song started with a breakdown, and that’s exactly what Know Justice does. Then it kicks into another breakdown, followed by another, all while we hear a verse and pre-chorus. The chorus hits with some semi-clean vocals before the song returns to its breakdown origins. It’s heavy, and it grooves, so I can’t really complain. Eventually a clean
interlude takes over for a few short bars, and we hear the song take a melodic but heavy twist to send us on our way.

The Long Slow Whisper is neither long nor slow, except for the start of the verse, but that doesn’t last long. The riffs are good, the vocals are heavy, and the grooves are strong. The band certainly has a formula which they have perfected, but it is a formula we’ve heard many times before. A guest female vocal switches things up a little mid-song, and we hear what I think is the first guitar solo on the album. Good song.

Next up is No Peace, which kicks off as a heavy rocker through the intro and verses until we hit our first breakdown riff of the song. Rinse and repeat a couple of times before the song breaks into a spoken/shouted word interlude. I’m sure this track has a whole heap of meaning behind it, but between listening and typing this review I haven’t had time to catch the lyrical content. Might be worth a read if the lyrics are available somewhere.

Enter phaser effect to bring in the heavy chugged groove of Rising Tide. A solid one two kick snare beat fills the rhythm through the first verse of intensely screamed vocals. I think we hear about 3 different verses before a huge chorus takes over the song, the type of chorus you can scream along to. A slower tempo bridge carries us into another massive breakdown and the song ends on that huge chorus again, leaving you at its high point.

Four songs out from the end of this album, and I’m going to wrap this up. Not because it’s not a good album, but because I don’t think I can really do it justice as someone who is not the greatest fan of the hardcore genre. The musicianship and vocal delivery are great; however, it does feel a little generic, a little too much like an overused format which does and will sell, just probably not to this guy.

I’m sure a read through of the lyrics might engage this listener and others in greater depth, as the band reinforces the fact that they are speaking for the injustices to this land and its original custodians. This is a little hard to follow in this format though, as the vocals are delivered quite ferociously, and at times at great speed, which doesn’t give you much of a chance to decipher the content.