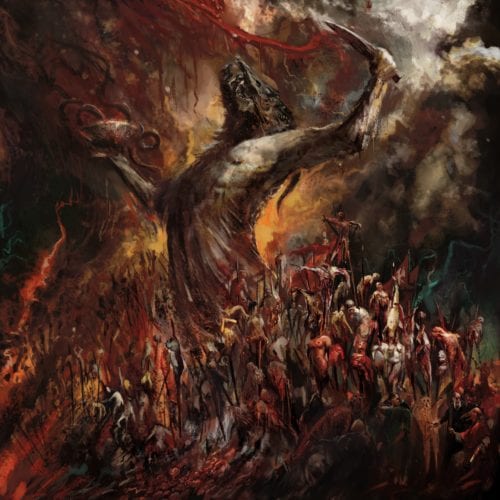 WEREWOLVES “The Dead Are Screaming”

The Dead Are Screaming is the insubordinate bastard spawn of every band, genre and artistic frontier smashing vision that Bean, Wilcock and Haley considered canon in their quest for extreme music domination.

The term supergroup has been bandied about by many bands over the years. Some good, some not so good. Musicians who choose to come together and collaborate with the intent of branching out into other musical arena’s. It has happened again in Australia in 2020 and that band is known as Werewolves. But, this band’s intent wasn’t to branch out into other diverse fields. OH NO! The three members of Werewolves’ purpose was to create absolute apocalyptic sonic carnage. So, what better way to kick off my one day off this week by starting my morning with a caffeine injection and some brand new brutal death metal courtesy of the aforementioned Australian SUPERGROUP! Featuring razor wire string shredder guitarist Matt Wilcock of The Berzerker, The Antichrist Imperium and Abramelin, brutal guttural vocal talents of Sam Bean of The Antichrist Imperium plus The Berzerker also and to round out this magnificent trio is punishing drum demolisher Dave Haley (of course 😉 of Psycroptic, Ruins, King and again Abramelin.

From such an impressive resume any listener could descend upon Werewolves debut album with trepidation with the perception that all the member’s talents could have been exhausted within other, more recognised outlets. But fear not, Werewolves are a punishing force whose sole purpose is to deliver one of the finest insanely brutal debut albums ever released in this country. The Dead Are Screaming is simply put fucking outstanding! A pummeling mix of all extreme metal styles the album kicks on with the aptly titled “Establish Dominance”, the spoken intro makes the purpose and intent of what the listener is about to be confronted with is perfect – “There are those who doubt the power of Satan. The power of Satan can change men into beasts!” and with that, the albums armageddon begins as like a shotgun to the face. Nothing is left to chance or obscured as the talents of Haley, Wilcock and Bean immediately launch feverishly into “Establish Dominance”, an early blackened death inspired track whilst unapologetically pummeling at first halfway through it becomes a slow groove foreboding entity that breathes a false sense of mental calmness before ending as it began, chaotic and insane.

Track two – “Know Your Place” is my personal fave beast on The Dead Are Screaming and here’s why…starting out with Matt’s rampant fret sliding and Dave’s blast beat snare punishment soon rounded out with Sam’s mud gurgling throat torture, where familiarity of sounds is apparent “Know Your Place” a minute or so in morphs into a black metal/hardcore inspired bastard child. But further along at roughly the two-minute mark, Matt Wilcock veers off with a killer little riff spinning the song 180⁰ into an outstanding groove-laden tune interspersed with further blast beats back and forwarding with extreme metal genre stylistic tradeoffs. “Know Your Place” fucking rules!

“Dogknotted” kicks in as chaotically as the two openers, sounding akin to all three members fighting over the last morsel of earthly sustenance. It is an early death metal fanatics paradise with Sam Bean doing his finest David Vincent (Morbid Angel) impersonation. The sharp discordant slow purposeful riffs courtesy of Wilcock alleviates the sandblasted wasteland that drives “Dogknotted” so intently which is where Dave Haley’s perfect rhythm capabilities complement the vast flesh-tearing feel of the song. (And those stabs that conclude “Dogknotted” are gold!). Need your neck bones pounded to dust still? Well fear not, the end of The Dead Are Screaming is not even close my friends.

Prepare your finest hair windmill for “Fountains Of Bile” which shifts from style to style, the one constant is how the track refuses to let go of your desire to move and contort your meaningless flesh for nearly five minutes. Precision laser cutting style guitars, hypnotic drums and vocal regurgitative delights “Fountains Of Bile” is the solid stamp on where we see the direction of Werewolves’ remaining debut heading. The Dead Are Screaming is the insubordinate bastard spawn of every band, genre and artistic frontier smashing vision that Bean, Wilcock and Haley considered canon in their quest for extreme music domination. No more proof is needed than the song at the halfway point on the album, also aptly titled “Beating Those We Despise”. There is little room for breath from the get-go and is also one of the standouts on the album as it coordinatedly brings the intent and purpose of the album together. The tail of end the song glides seductively into a slow mesmerising groove that just won’t quit; just like the grip and talent of Werewolves and the three members that birthed its traditionally rooted, black hole creating debut album The Dead Are Screaming.