Werewolves Finally Unleashed From Their Cave 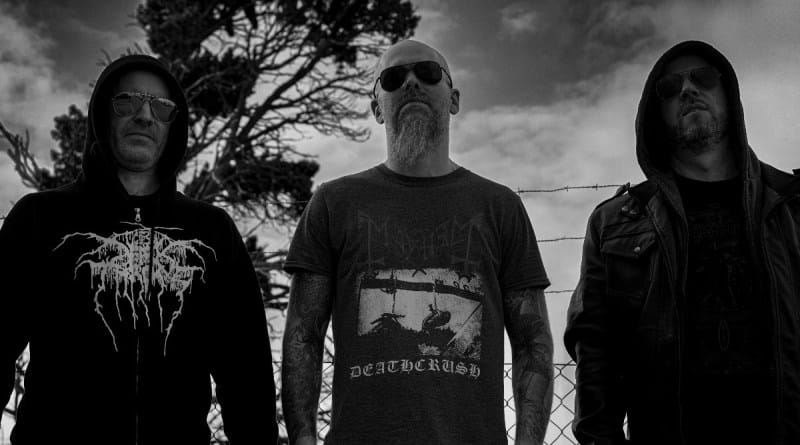 “We are pretty up front that we’re not trying to reinvent the wheel, perhaps the only thing that we might be doing differently is reinjecting that real old school anger and aggression back into metal. For me a lot of modern metal sounds emotionless…A lot of fireworks, not too much heat!”

Metal V of HEAVY opens with courteous greetings asking Sam Bean, vocalist of Werewolves – “G’day Mate, How are Ya?” He responds with “sick as a dog at the moment” having unfortunately caught the flu post debut show in Sydney. But continues by saying…“Flat chat, we’ve been going at it with music these past few years, but this year’s been next level. Not just with the EP out earlier this year and this new album out now but we have a new (*spoiler alert*) The Antichrist Imperium album coming out in September”.

With that exciting nugget of information revealed I quickly skim over my palpable excitement and cut back to the fact that, as I have reiterated many times regarding Werewolves, there have been 3½ releases in three short years. A massive achievement by anyone’s reckoning

I mention this to Sam and cheekily ask if he is sick of the sound of his own voice, he elaborates; “Nah I fucking love it! That’s why I do it.”

Laughing together, Sam continues, “I don’t even listen to anyone else’s music, I just put my shit on repeat. I found out the other day I can almost get through three-quarters of the day just listening to albums I’ve released before.”

As we both have a chuckle together Sam cuts to his serious side and honestly tells me, “a serious answer to that is yeah, I’m slightly sick of just…”, Sam subtly warbles a feigned death scream into the microphone, then elaborates, “screaming like an idiot over absolutely everything… We’ve had (Werewolves) album number four finished since about the same time as we did album number three for everything but the vocals! My whole thing was, “Man I need to space these sessions out a bit, otherwise we’ll just sound like the EXACT same album coming out every time.”

I ask Sam here stating a need to discuss whether he finds releasing so much material in a short space of time tedious and also whether he finds it difficult to find motivation for new material or is he able to, being in a traditional death metal band, roll with those same necessary ideologies when it comes to writing. “We are pretty upfront that we’re not trying to reinvent the wheel, perhaps the only thing that we might be doing differently is reinjecting that real old-school anger and aggression back into metal. For me a lot of modern metal sounds emotionless… A lot of fireworks, not too much heat!”

Here I passionately agree with Sam on this point and actually mention that I alluded to that when writing my review for Werewolves latest album “ From The Cave To The Grave” stating: “Werewolves are literal purists of the genre be sure! Few bands stay true to the craft of any metal traditionalism these days, we are all too aware that many bands and the musicians within them are trying to out noodle one another or whatever means of unnecessary wankery it takes to get lost in the plethora of extreme mediocrity around them, which is a shame but also a blessing, because we of the old guard of metal hierarchy (LOL again) can pick pretentiousness in our metal like a dirty nose. It smells like the turd of try hard elitism and gets turned off after thirty seconds of the opening song due to its putrid Stench!”

Is it our age I ask…you know, the “old man” syndrome of everything sounding the same? Sam says in honest agreement, “I don’t think it’s just us either. I can remember back in the day Max Cavalera sounds different to Glen Benton who sounds different to Jeff Walker who sounds different to Karl Willetts and Chuck from Testament and Chuck from Death. Every vocalist had their own thing, sounded different and every band had their own thing, sounded different whereas yeah you’re right quite often when I hear them, I know that this is what everyone was complaining about when I started listening to metal was “they all do sound the same!”

That touched on I asked Sam if that was an instinctual thing, wanting listeners ears to pop up and take notice of what he was going for in Werewolves, trying to find a hook or distinct points of difference when writing material for the band.

“It’s a bit hard to say with the music because Matt (Wilcock – guitars) writes the guitar…at the start he was like “let’s be silly and lean back on our chops and pump out an album as quickly as possible, we were surprised that it worked. These days he’s got two loves, speed/death metal but also blackened stuff as well…I think his riffs are taking an elevation of both those too far – The blackness at the start of the song “Harvest Of The Skulls for instance is just something like Marduk’s – Temple Of Decay but really taken to level.”

Sam elaborates on his personal contributions to the Werewolves collaborative process;  “as far as my input goes, I’m very much about hooks. I think Nile and Meshuggah really fucked it up for everyone when they got famous. They’re great, and I love ‘em…but after them everyone was like “You killed off hooks in extreme metal! If there’s a good bit in a song, play it for five seconds, and then you leave it. And like “Nah Man, it gets people pulling stank metal face and it’s just like you go back to that bit again and again. You thump your fist down on that big red pleasure button of theirs until they are all out of juice. That’s what it (metal) is about for me!

So with the upcoming gig in Melbourne at the Northcote Social Club on July 8, I ask Sam how excited he is to be finally showcasing material live finally, “I’m starting to get kind of excited now!” – Reflecting on his past gig in Sydney he continues, “if that’s how good last Saturday was with that level of preparation it’s gonna get more and more savage and full on…”

Listening to the full interview, Sam and I discuss a myriad of topics ranging from old school death metal and its impact on extreme music today, how the instagram plague has impacted bands that are trying to make a mark in today’s scene and also how Sam is able to navigate the difference of styles in his writing and performing in different bands and change his musical identity. Plus also of course showcasing killer tracks from Werewolves new album From The Cave To The Grave out now on Prosthetic Records.