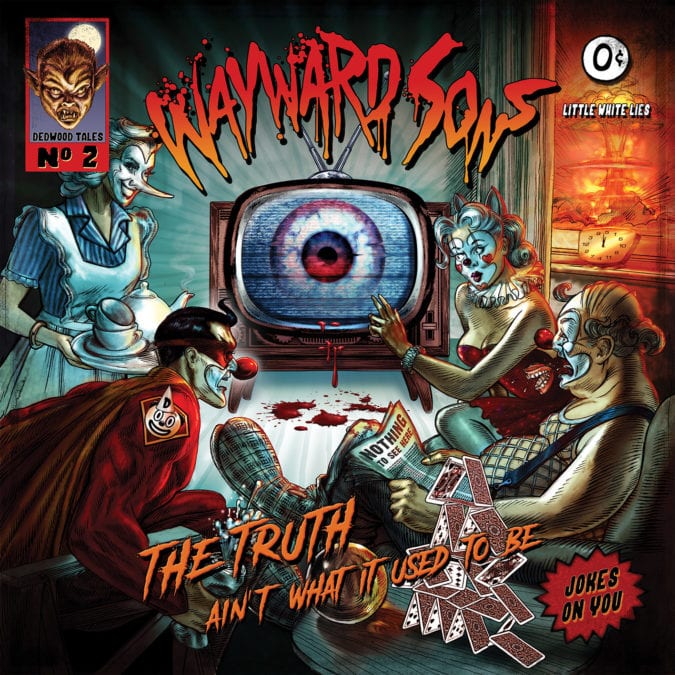 WAYWARD SONS 'The Truth Ain't What It Used To Be'

It’s a real pleasure when an album feels like an album: when the listener can swing from each track as though they are branches off of the same tree, a wholly congruent journey. This is what Wayward Sons have achieved with their upcoming album The Truth Ain’t What It Used To Be (due for release 11th October 2019 via Frontiers Music s.r.l). An album that explores a myriad of tones whilst following an organised stream of consciousness that’s rooted in defiance from the band’s frontman Toby Jepson, The Truth Ain’t What It Used To Be is a cleverly crafted journey allowing for a plain-sailing voyage through Jepson’s narrative of our funked up little earth.

The Truth… opens with the sharp jutting of “Any Other Way”, and sets the precedent for the tight production standards the album is riddled with. From the palpitating thud of percussion and the tough back-bone of bass, to the splashes of harmonious colour brought by backing vocals, The Truth… presents with tracks that offer musical layers the listener would happily listen to in isolation from each other. The production, courtesy of the band and previous partner-in-production Chris D’Adda, achieves a crisp equilibrium across each layer, allowing for easy tracing of each instrument and ensuring each element gets the room it needs to breathe.

The Truth… proves to be a vocal playground for Jepson, who shines in his dynamic, characterful delivery, such as displaying spitting malice in “As Black As Sin”, howling with soul-reaching screams in “Fade Away” and running through gorgeously-hued vocal acrobatics in “Little White Lies”. The dynamism of Jepson’s delivery, paired with melodious instrumentation that very vividly bleeds with storytelling, graces the album with a touch of theatrics that could place The Truth… on Broadway as a rock opera – and with that, it should come as no surprise that the album often wears its Queen influences on its sleeve.

Meanwhile, guitar from Sam Woods and Jepson holds its own personality alongside the lead vocals, encompassing lion-hearted riffs, confident struts and muscular urgency. Keys from Dave Kemp add piano pomp and ceremony to “Little White Lies” and “Joke’s On You”, jewellery box delicacy to the tough velvet of “Fade Away”, and a jubilant anthemicism to the chipper “Long Line Of Pretenders”. And yet, throughout all of these shades of music, Jepson’s lyricism points to an unwanted dystopia. The Truth… is often an album of light that also works to unveil the shadows laying in its foundations – so pointedly bolstered by Jepson’s musings on the dark and light in haunting finale track “Us Against The World”: “Can I hope to see the dark become the bright?”

This false ending is soon capsized by hidden track “Totally Screwed”, which upends the uneasy existential reflections of “Us Against The World” with an encore of tongue-in-cheek cynicism. Thus, the adjacency of “Us Against The World” and “Totally Screwed” conclude The Truth… with a symbolic ellipsis of the world’s current political and social unrest – a story to be continued.

Pre-order The Truth Ain’t What It Used To Be here.