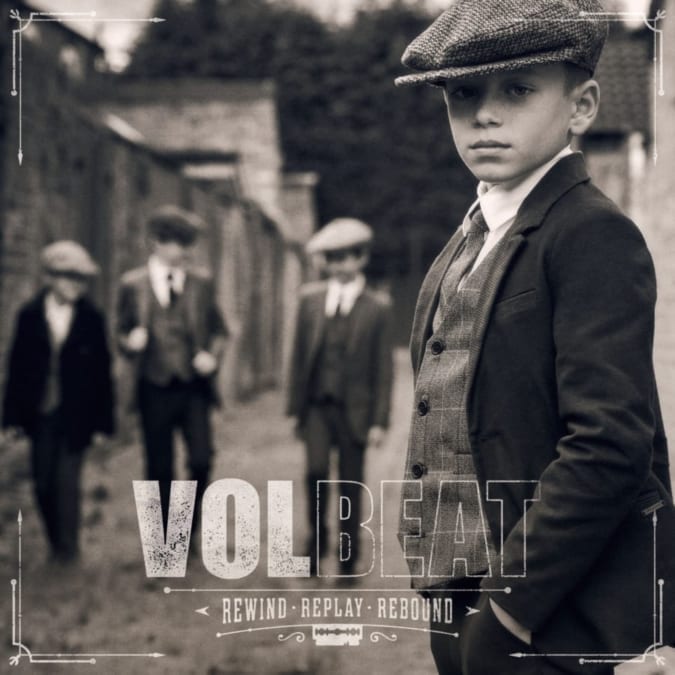 Rewind, Replay, Rebound is the best album Volbeat have ever produced any doubt what-so-ever. A bold statement considering the high quality of their six previous studio albums I know, but a statement I stand by after non-stop replays of the three R’s over the past week. It’s definitely their most melodic album to date. ‘The Everlasting’, which should already be familiar to Volbeat fans having been included on the ‘Let’s Boogie!’ live album from last year, being the heaviest of the 14 tracks. Nothing here compares to the heaviness of say ‘Evelyn’ or the metal of ‘Room 24’ which, although welcome on their respective albums, suits me fine.

‘Rewind, Replay, Rebound’ was produced by long-time collaborator Jacob Hansen and co-produced by Rob Caggiano and Michael Poulsen. As the saying goes “If it ain’t broke, don’t fix it”, and I for one am chuffed that Volbeat have decided to stick the same old formula that has served them well over recent years, with a couple of twists included.

Explaining the album title, front man Michael Poulsen says, “With the lyrics, you go back in time to your own childhood and fly away to what you did as a kid. When you do that, you replay that when you grow up. If you’ve been going through something and you have been down, and then rise up and get stronger, that’s the rebound. But it also references the music. Some songs could easily be on our first two or three records — that is where we rewind. Now, in 2019, we replay it, and we even become stronger.”

Having already released five songs from the album, including the glorious opener ‘Last Day Under The Sun’ (an instant live favourite I should imagine, and having just checked Setlist fm it’s the only song, along with ‘Leviathan’, they played from the new album on the opening night of the Knotfest tour) Volbeat have certainly sent out a good indication of the vibe they’re feeling with ‘Rewind, Replay, Rebound’

The wonderfully titled ‘Pelvis on Fire’ is old school Volbeat at its best! A blatant rip off of ‘Sad Man’s Tongue’ with a strong dose of ‘Pool of Booze, Booze, Booza’ thrown in. “It’s a pure rock ‘n’ roller,” according to Poulsen. “When you hear songs from the ‘50s and ‘60s, and read the lyrics, they are not that deep. What the fuck is ‘Tutti Frutti, oh Rudy?’ [laughs]. That doesn’t make sense. But it sounds great. It is a feeling. It’s a movement. It’s sexuality. It’s emotional and that thing we feel when we hear good rock ‘n’ roll.”

Clutch vocalist Neil Fallon is featured on ‘Die to Live’, a Jerry Lee Lewis style rocker which also features Raynir Jacob Jacildo (piano) and Doug Corocran (sax) of JD McPherson’s band. The input from all three taking the song to another level entirely. One of my favourites on the album.

In addition to working with backing vocalist Mia Maja on several tracks, Volbeat once again recruited the Harlem Gospel Choir, who appeared on the song ‘Goodbye Forever’ on previous album ‘Seal the Deal & Let’s Boogie’, to feature on three songs. Incorporating the choir into the Volbeat sound was a seamless process, with Poulsen saying, “I didn’t have to think about it. I knew they would fit. They are on three songs when they could have easily been on more.”

‘Sorry Sack of Bones’ see’s Volbeat resurrect their psychobilly influences. Think The Cramps meets Rev Horton Heat and you wouldn’t be far wrong. The lyrics, according to Poulsen can be interpreted in multiple, less serious ways, from suffering with the worst hangover to waking up in the woods and feel your body deformed, crushed, and you have a flashlight and there are tons of bags of body parts, and you are left to wonder how you got there! But that’s psychobilly for you!

Legendary Exodus and Slayer guitarist Gary Holt is recruited to play the solo on another of my favourites ‘Cheapside Sloggers’. Which again adds a new perspective, along with Rob Caggiano’s excellent fretwork throughout the rest of the song, to another future melodious Volbeat classic.

‘The Awakening of Bonnie Parker’ is the band’s take on the classic Bonnie & Clyde tale. Bonnie wakes up from the dead and is convinced that Columbia Pictures has been calling and she is the next big thing. She picks up Clyde’s saxophone and brings it to his grave and tries to convince him to join her on her trip to Hollywood, but he is content and has found peace in his coffin. A bizarre story behind a marvellous song, complete with ‘Leader of the Pack’ style narrative which actually compliments the classic Volbeat sound perfectly.

I often hear folk asking where the next big festival headliners will come from. Who will replace Metallica, Iron Maiden and Slipknot when they call it a day. For me Volbeat are right at the top of that list. They are already on a par with those legendary bands in their native Denmark. Now it’s time for the rest of the world to take note.