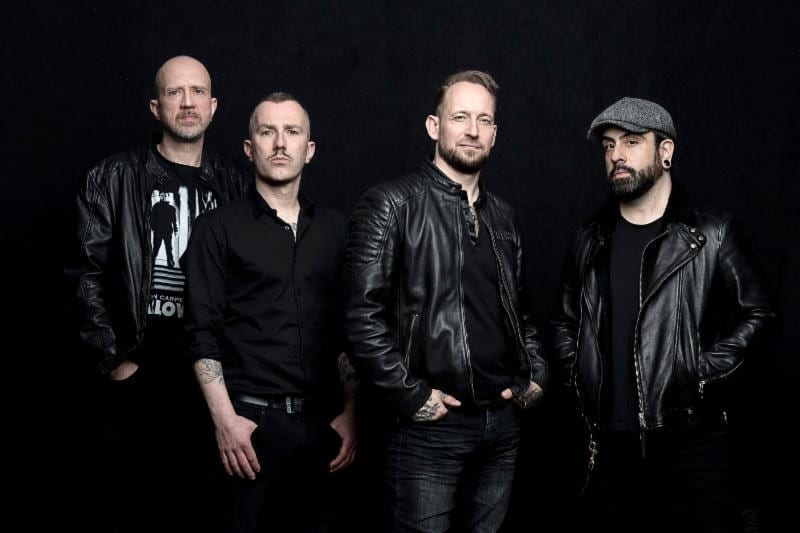 “I wanted to add something new and not typical, so why not bring in Gary Holt? He is a great guitar player, and the solo sounds great,” says singer and vocalist Michael Poulsen.

The video was directed by Shan Dan Horan of Shadow Born Group, who has previously created many lyric videos for the band, including “Parasite,” “The Devil’s Bleeding Crown,” “For Evigt,” “The Bliss,” “Black Rose,” and “Seal The Deal” from Seal The Deal & Let’s Boogie.

VOLBEAT will release their seventh album Rewind, Replay, Rebound, on August 2nd via Vertigo/Universal. For the album, VOLBEAT — Michael Poulsen (guitars/vocals), Rob Caggiano (guitars), Kaspar Boye Larsen (bass), and Jon Larsen (drums) —build upon the distinct, psychobilly, punk-tinged rock ‘n’ roll sound they are known for, while reaching for new creative summits. “The whole point for us going into the studio, is because you still have something to prove — not just for the fans, but mostly for yourself,” says Poulsen. “We would not be able to do this record if it wasn’t for the work we have done in the past. No matter how old the band gets or how many records we do, there is always going to be that signature sound.” Rewind, Replay, Rebound is available for pre-order on all formats here, including a 2-CD deluxe edition, a special deluxe edition box set, and transparent and blue coloured vinyl, numbered and limited to 1000 copies each. Fans can also see the video for previously released single “Last Day Under The Sun” here

At this point in their already storied career, VOLBEAT has opened for Metallica, Motorhead, and Slipknot, garnered the 2014 Best Metal Performance Grammy nomination for “Room 24” and won multiple Danish Music Awards. For this album, they mine their own personal histories and that of their genre. The song “When We Were Kids” finds VOLBEAT ruminating on immortality and innocence we naively experience in our youth, while “Rewind The Exit” and “Die To Live” both explore how the pursuit of perfection can be a hollow goal.

‘Rewind, Replay, Rebound’ was produced by long-time collaborator Jacob Hansen and co-produced by Rob Caggiano and Michael Poulsen. This marks the first studio album with Kaspar Boye Larsen on bass. To achieve the album’s sound, the band also drew upon a myriad of guests, including backing vocalist Mia Maja and the Harlem Gospel Choir, who both return after appearing on 2016’s Seal The Deal & Let’s Boogie. Clutch vocalist Neil Fallon is featured on “Die To Live,” a collaboration that is the result of the bands touring together and a love for the singer’s gruff and powerful style. Raynier Jacob Jacildo (piano) and Doug Corocran (saxophone) of JD McPherson’s band also lend their talents to the song. Ultimately, VOLBEAT have not lost their passion to create and progress. It’s that which keeps them hungry – and musically honest on the new album.

Starting next week, the band will spend the Summer on the road in North America with Slipknot as special guests on their Knotfest Roadshow North American Tour alongside Gojira and Behemoth. Tickets for the 29-date tour are on sale now here.

The band also announced the first leg of their headline Rewind, Replay, Rebound World Tour, with support from Baroness & Danko Jones. This tour will see the band performing in cities including London, Madrid, Berlin, Hamburg, and Stockholm (full dates below) and tickets for all dates are now on sale here.

VOLBEAT emerged from Copenhagen in 2001. Since then, they’ve tirelessly clawed their way to hard rock’s upper echelon with endless touring and six beloved albums. Their last studio album Seal The Deal & Let’s Boogie debuted at #1 in seven countries including Germany, Denmark, Sweden, Finland, Belgium, Austria, and Switzerland. In Canada and Norway, the album entered the charts at #2, in the USA at #4 and in the UK at #16. Most recently the band released Let’s Boogie! Live At Telia Parken, a concert film and album documenting their landmark 2017 Copenhagen show in front of 48,250 fans, the largest show a Danish band has ever performed in Denmark. 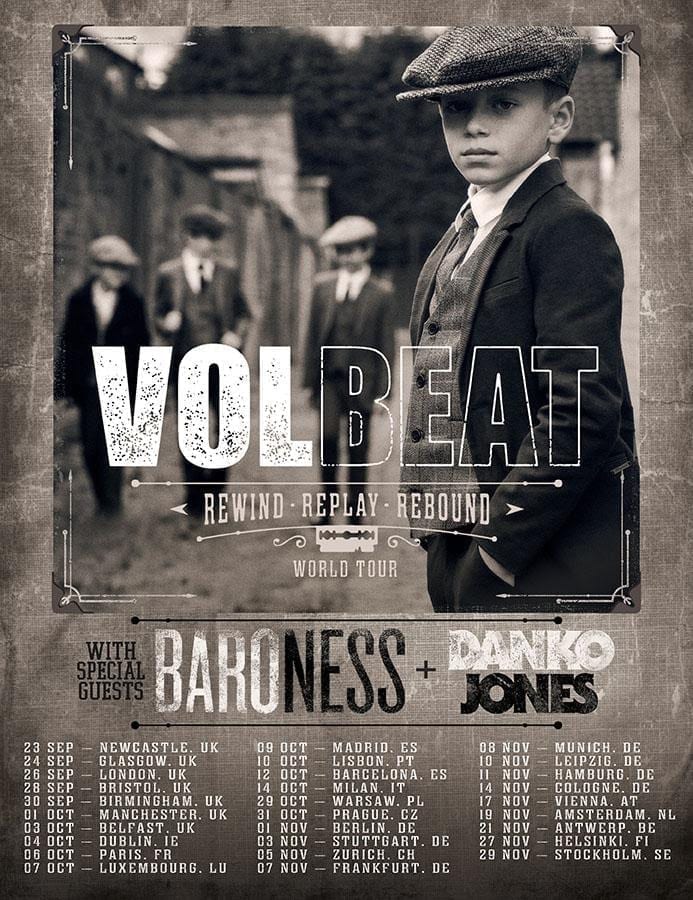