Victoria Bitter are excited to announce the winners of VB Hard Yards 2018.
Being Jane Lane, Paper Thin and Claws & Organs have all scored a spot in the VB Hard Yards tour van, and will play a series of FREE gigs with Alex Lahey, Tired Lion, WAAX, and RAAVE TAPES this October.

Over 600 hard working bands from Queensland, New South Wales and Victoria applied for their chance to play with some big headliners on the VB Hard Yards2018 Tour – for the ultimate leg up.

After surviving shortlisting and the public voting process (with over 4,000 votes), Being Jane Lane, Paper Thin and Claws & Organs will hit the road this October to share stages, audiences (and a hard earned VB), with Aussie faves Alex Lahey (Melbourne only), Tired Lion (Sydney only), WAAX(Brisbane only) and RAAVE TAPES (Newcastle only).

After four years, an EP and 3 music videos, Being Jane Lane (QLD) are currently working on their debut album. The all girl punk rock powerhouse have certainly impressed their sunshine state audience; previously winning the People’s Choice category for the Gold Coast Music Awards.

It’s been just two short years since Paper Thin (NSW) had their first jam, but they’ve certainly squeezed a lot in to that time. Two EPs and a few festival appearances later (Poison City Weekender and Thrashville) Spencer, Aidan and Liam have won the hearts of the DIY scene, putting in the hard yards all whilst sticking to their day jobs.

Claws & Organs (VIC) have spilled blood, sweat and tears on every stage in Melbourne over the last five years – they’re not afraid of a little hard work. After the band nearly fell apart, they held on, found a new member and became their strongest iteration yet.

Register before Sunday, September 23
for your chance to be there!
victoriabitter.com/hardyards

Register before Sunday, September 23
for your chance to be there!
www.victoriabitter.com.au/hardyards 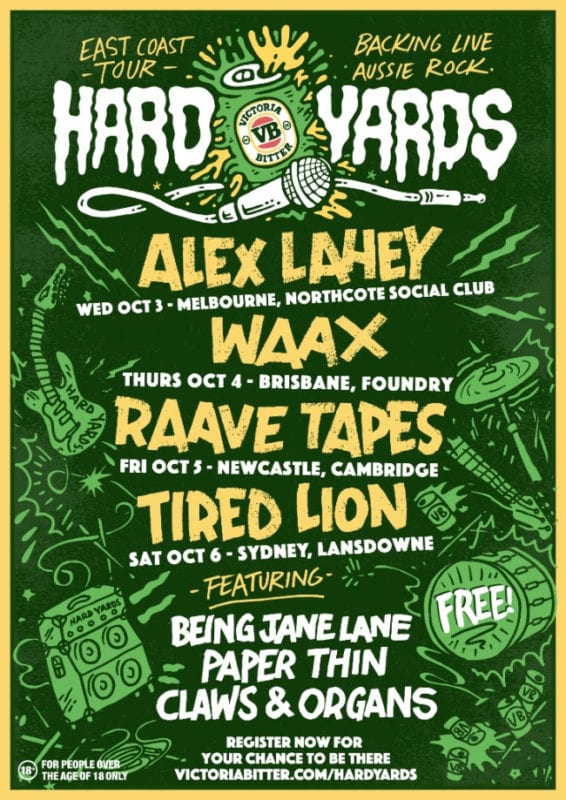