VAMPED UP Deliver The Treats With OUR PARTY On July 30 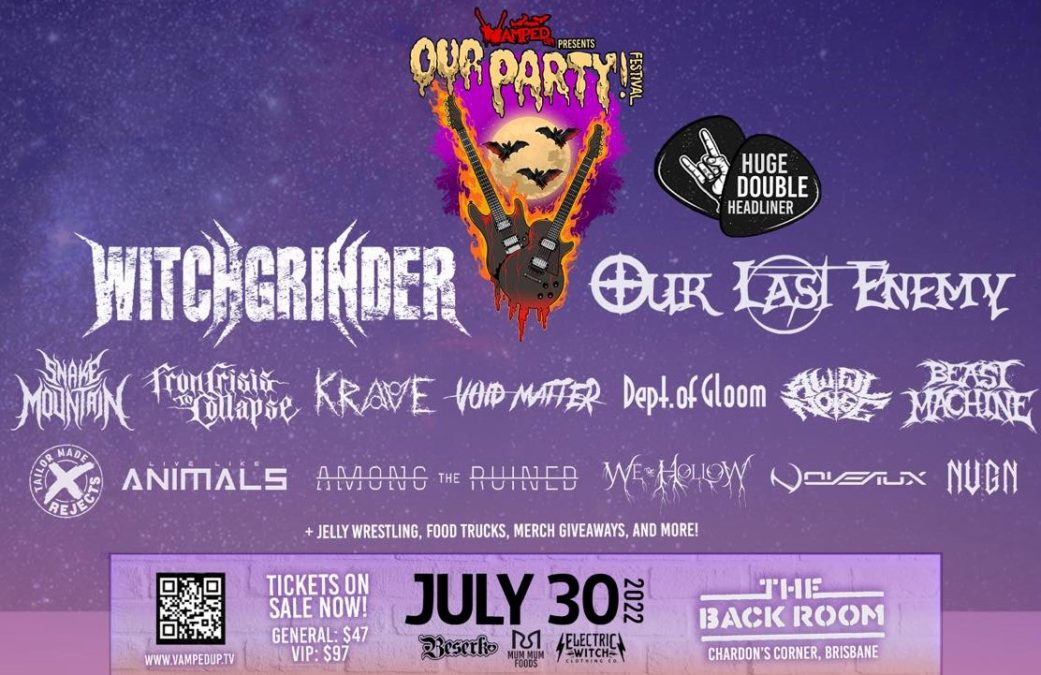 Any music festival that openly declares its love for the music community as a whole is a winner in the eyes of HEAVY, so when our good friends at Vamped Up decided to host a soirée and call it Our Party, we knew this was going to be something pretty special.

After initially being slated for the beginning of this year, Pamela and the crew from Vamped Up have had to juggle the dates a few more times to keep the bulk of the lineup intact and the hard work has almost paid off with the inaugural festival set to launch at The Back Room at Brisbane’s Chardons Corner Hotel on July 30.

Packed with a wealth of local and interstate talent – including Witchgrinder, Our Last Enemy, Snake Mountain, From Crisis To Collapse, Beast Machine, We The Hollow and more, Our Party is more than another music festival, it is a celebration of music itself led by people who are passionate about the future of rock, punk and metal.

There’s a swag of other goodies to keep you entertained, including jelly wrestling, food trucks, VIP options and plenty more so start planning your day now.

HEAVY caught up with the lady behind the festival AND Vamped Up, the alluring Miss Pamela for a chat about… well, everything.

“Enjoy your life is what I’m trying to say,” she more or less ordered. “I do all of this out of the goodness of my heart. I never ask for any money, and this is all for the bands. Every band gets paid, but you’ve gotta buy the tickets! Support the music industry; support the people that do support the industry and come along because we’ve got a show within a show. I’ve got a coffin and I will be interviewing from there and there might be some sexy Vampettes as well… We like to do things a bit differently, and this is going back from when I started. t’s like what I grew up with. I grew up with The Addams Family. I grew up with The Munsters and they were all comedic, right? I’m bringing that back and doing a bit of a routine, so we’re doing a show within a show!”

In the full chat, Pamela talks more about the reasons behind putting the show on, the bands playing and her personal connection with them, special events happening on the day such as jelly wrestling, the VIP area and merch, supporting the local music scene and more.

For tickets, merch or to sign up for the Jelly Wrestling head to www.vampedup.tv.