The game-changing new rock, punk and metal festival for Sydney, UsFest has released the festival timetable with Big Music Bandits and Scarburrow kicking off the day! Along with the announcement of, fresh from performing at Download Festival, Newcastle pop-punksEat Your Heart will be hitting the decks for a DJ set and Taking Back Saturday will be throwing a huge “Bring Me The Horizon: On Repeat” party!

The festival is set to kick off this Saturday, April 6th, get in quick as tickets are almost sold out! 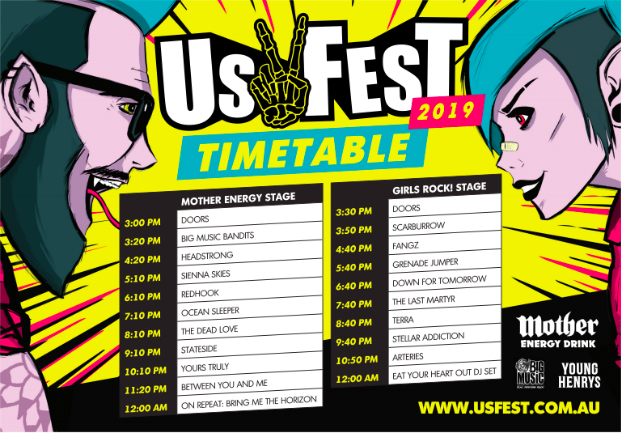 Co-headlined by pop-punk shooting stars Yours Truly and Between You And Me, the inaugural event features a paradigm-shattering rock, punk & metal bill made up of a minimum 50% bands with at least one non-male identifying member, uniting to raise funds to support the important work of Girls Rock Sydney.
UsFest was created and curated by RedHook vocalist Emmy Mack, in partnership with her childhood friend Tiana Jarvis, and they are thrilled to announce the news today in celebration of both International Women’s Day and RedHook’s final day as triple J Unearthed Feature Artist.
Mack says the inspiration behind UsFest came from wanting to turn a negative situation into a positive one.
“There’ve been a lot of important conversations happening around the issue of gender diversity on Aussie festival lineups in recent years. And the heavy scene – which has been overwhelmingly male-dominated throughout history – has come under particular scrutiny.
It’s obviously a very complex, emotional topic, but there seems to be a fundamental disconnect in the way that both sides have been discussing it in relation to our scene, and it’s created a lot of ugliness and division within the community. Last year I was actually feeling really depressed about it all, so I decided to do something to try and change it.
With UsFest, I wanted to create something positive that brought us together instead of tearing us apart. I wanted to go beyond simply ‘calling out’ the problem to offer what might hopefully be the start of a solution – creating meaningful change at the grassroots level in the hope of starting to see things shift in the treetops.
I also want to add that, while UsFest may be a new kind of event for the punk, rock & metal scene, we’re proud to be part of a new paradigm of festivals in the wider Australian music community.”
Joining Yours Truly, Between You And Me and RedHook on UsFest’s dual stage 2019 bill will be Brisbane punk quintet Stateside, Grippland’s metalcore outfit Ocean Sleeper, Sydney grunge heroes The Dead Love, local scene veterans Sienna Skies, Meblourne alt-punk rockers Terra, purveyors of “rock with heart” Stellar Addiction, Sydney metal champs Arteries, Melbourne metalcore rising stars The Last Martyr, Northern Beaches punks Down For Tomorrow, fresh-faced Sydney pop-punks Grenade Jumper, alt-metallers Scarburrow, bluesy rock newcomers Fangs, Sydney pop-punks Headstrong and student band the BIG Music Bandits (which is coincidentally where members of headlining act Yours Truly first met!)
The overflowing support from everyone involved in the event has been nothing short of mind-blowing for event co-creator, Tiana Jarvis.
“We’ve been so floored by the incredible support from all corners! Also very heartened by the show of solidarity from the male artists on our lineup, not to mention all the higher-profile artists of all genders who’ve thrown their weight behind this important cause,” Jarvis says.
“We’d particularly like to thank the amazing staff at OAF who’ve donated their iconic venue for the event, the legends at MINOR//MAJOR for donating their services, to Girls Rock Sydney for their invaluable advice and guidance and of course to our amazing and caring partners Mother Energy, Young Henry’s and BIG Music, without whom this event probably wouldn’t be happening.”
UsFest 2019 will take place at Sydney’s Oxford Art Factory this Saturday, 6th April!