Hard rock band Seether have just announced the 5th Annual Rise Above Fest, the largest suicide awareness event in the world, which will be held Saturday, July 22nd and Sunday, July 23rd at Darling’s Waterfront Park in Bangor, Maine. This year’s performers include Korn, Shinedown, Stone Sour, Skillet, Halestorm, Falling in Reverse, and more. Morgan, Rise Above Fest’s founder, was honored last year with the “Artistic Expression” Award from the National Council for Behavioral Health at the Awards of Excellence in Las Vegas. 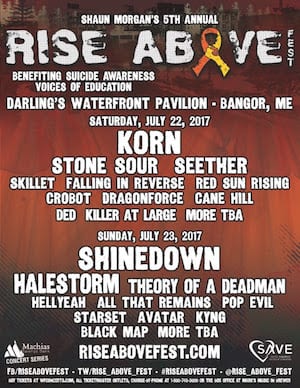