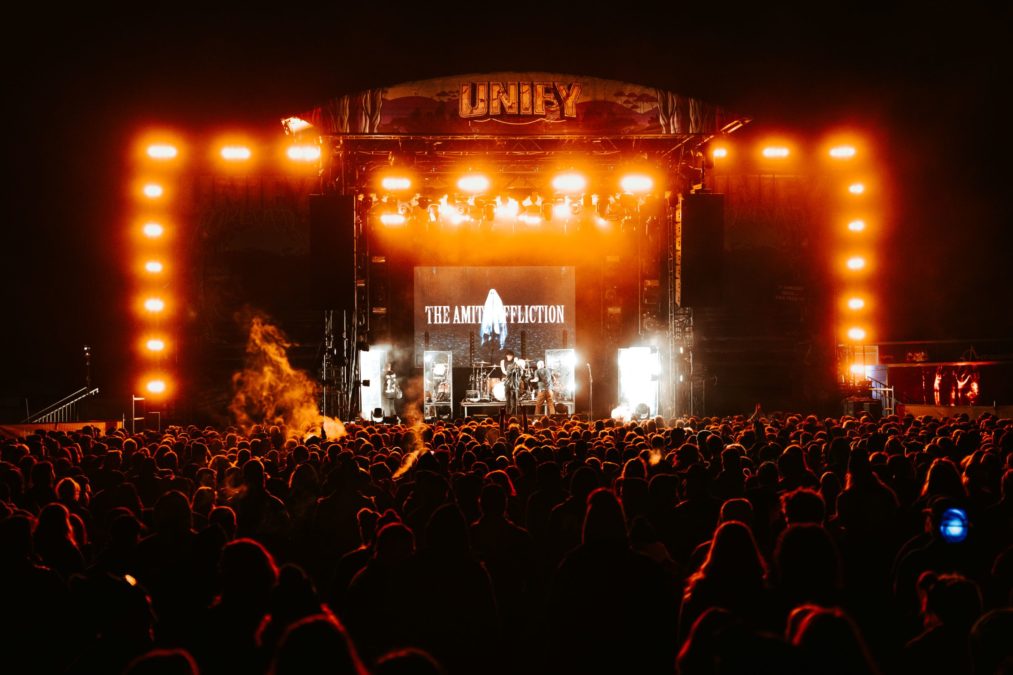 After what’s felt like a lifetime and then some, we’re finally reunited with what has to be the best weekend us metal/emo/rock heads could ask for. We’ve been longing for connections with not only our favourite Australian bands, but with our friends we likely haven’t seen (in this capacity) since the last Unify Gathering.

The journey into Tarwin Lower is just one of the many things that makes this festival so special. Leaving the big city to escape for a few days, into a field in the middle of nowhere, brings with it a sense of freedom and hope.

As we enter those special gates, we’re welcomed with lines of cars as far as the eye can see. From camper vans to four-wheel drives, everyone is well and truly prepared for the days yet to come. While we all wait to park our vehicles and unload it doesn’t take long before people are setting up chairs, cracking open a cold one and soaking in the beautiful weather with their best mates by their side. I’ve always encouraged people to take in the whole experience of Unify by arriving on the Thursday, from being the first to set up camp with your crew to enjoying the artists that set the stage for the rest of the weekend.

With that in mind, we begin the night with performances by Rumours and Drown This City, both equally powerful in their own right. The first brought the energy we needed to get us off our feet with a mixture of pop punk and grungy undertones, clean vocals and crystal clear screams. The latter delivered a heavy and poised showcase that proved themselves above and beyond what I’d seen from them before; their execution and elocution on stage for a hardcore band is what sets them apart from most.

Although it seemed pretty hard to top the last two performances, the following band truly brought its own cult following to its performance. Dregg have plowed their way into the scene over the last few years and developed into what feels like their own unique, yet familiar sound. Putting it the best way possible, they didn’t hold back in executing a dirty yet sophisticated set for their hungry and abundant fans.

After what felt like the coldest night’s rest, we begin our Friday morning with a foggy head and a need for a good feed or coffee to get our day started; unless you hardly slept from the sheer excitement of what was to come, a nice cold beer was the way to go for some.

I started the day with what felt like one of my highlights for the weekend, primarily because I didn’t know what was in store when it came to Banks Arcade. I’d taken the time to listen to them prior to their performance and I personally felt like they delivered one of those clear-cut record to live sets, beautifully. Their single Sick was stuck in my head for the rest of the day, they definitely gained a fan out of me and many others I’m sure.

Next up was none other than Sydney’s homegrown, Bloom. This is a band that primarily is built for those intimate, in your face sets; However, they quickly disabused me of that idea from the first track. They took control of the stage and had the crowd in the palm of their hands. I’ve watched this band over the last few years making their way up the ranks, and they showed us why they deserved to be here today.

When it comes to Dream On Dreamer it almost feels like we’re dealing in Australian hardcore royalty, therefore it was surprising to see them playing this early in the day. That however, had absolutely no impact on their set and what we all know they’re more than capable of delivering. From Marcel’s impeccable stage presence and delivery, to Zach’s bittersweet melodies and poise. They’re on their way to a farewell tour this year, and it’s performances like this that show us just how much they will be missed.
If there is ever a band you have to miss at a festival like this, please don’t let it be this one. There are few artists that sound as good live as their recordings and there are fewer that sound even better live, WAAX is by far the latter.

Marie “Maz” DeVita brings to the stage everything you could want from a front woman, with a vocal range and energy that is unmatched from my perspective. Not to mention the band that backs her up, delivering in sync to an equally matched performance.

Ocean Grove needs no introduction when it comes to stage presence, sound and delivery. There’s a reason why this band has risen up the ranks over the last decade, and it’s because they know how to put on a damn good show. From pyrotechnics to confetti, it’s hard to conceive of a more interactive and blood pumping set. Then just when we thought things couldn’t get any better, they took us back to the old days, with a guest appearance by their ex-vocalist, Luke Holmes.

After five years of touring the world, playing multiple festivals and releasing new music it was bittersweet seeing Trophy Eyes play Chemical Miracle in full on the stage that brought this band to prominence. Donning the very flag they waved back in 2017, it felt like this would be one of the last times we’d experience this wonderful album in its entirety. From heavy symphonies to emotional ballads, we shared all of the emotions and watched them as carried it to the very end.

I’m going to go out on a limb and say this was one of the cleanest sets I’ve seen by The Amity Affliction in years. Not to discredit their previous performances, but the energy and grit that they displayed tonight is what has made this band a consistent headliner over the years. After releasing an abundance of albums, it can be hard for a band to incorporate the songs that we all want to hear, and yet they managed to give us the perfect mix from Youngbloods to Chasing Ghosts, and it was a dominant set of the ages. However, closing the night with one of their latest singles, Soak Me In Bleach, they showed us that they’re not ready to slow down any time soon.

With night one officially in the bag it felt hard to conceive of a better day to come, but maybe that was my disbelief at the fact this weekend was able to go ahead after the last two years we’ve encountered. Nonetheless if there was ever a band that wanted to burst its way through with nostalgia- It would be Short Stack. After 7 long years of being out of the spotlight, it was a delight to see these boys back on stage, doing what they do best. Not to mention that they easily pulled one of the biggest crowds of the day, as they rocked our bodies all the way back to 2007.

Speaking of another hiatus and a long awaited comeback, Stories exploded onto the stage like they’d never left it in the first. There’s something special about watching a band re-emerge from the ashes as a whole new, but familiar group. They delivered one of the heaviest sets of the weekend, and I was living for every second of it.

What has to be arguably the fastest growing pop punk/rock band to come out of Sydney, Yours Truly delivered a mesmerising yet defined set. Here is a band that has had its sights on the goal it wants to achieve from day one, and they are smashing it out of the ballpark. In 2019, they were opening Unify, now they’re heading the big stage at twilight and doing so with class. Pink love heart shaped confetti fills the sky as Mikaila’s voice echoes out the last few lines of Heartsleeve.

In the past I would like to have thought I was biased when it came to this next band, however they well and truly executed the most well structured, awe defining set of the weekend. Thornhill are making their place in the music industry abundantly clear with every performance, but this one had no prior comparison, and I think I speak on behalf of everyone when I say that. They are built for the big stage, the pyrotechnics and monstrous crowd screaming every one of their lyrics back. This set was built on everything they’ve worked on over the last few years, which made it emotionally raw yet blissfully composed and their sound is finally being heard at the capacity it deserves.

Typically you wouldn’t think a band like Slowly Slowly would follow such a heavy set, but it worked poetically. The flow of this band is really something else, they knew how to control their space on stage like they’d been doing so for decades.

Singing ballad after ballad, I couldn’t help but feel like this was the most fun I’d had at a set all day. From Jellyfish to Race Car Blues we felt the energy lifting out in the cold, open air, and it was truly something magical to be a part of.

With the night coming to a close, I couldn’t help but reminisce on the last 48 hours and just how fortunate we were to be here, a part of something this authentic and homegrown. The stage however was only just getting warmed up for what would end this long weekend in style.

Over the years, Violent Soho have woven their way into becoming one of the most iconic rock bands that this country has to offer, while still being grossly underrated. From the first note they had everyone moving to their rhythm, screaming their iconic lyrics and pushing themselves beyond the limit that the day had already provided. Finishing with what can only be described as pure chaos, Covered In Chrome would be heard echoing for miles throughout the empty fields of Tarwin Lower.

Thanks to everyone involved for bringing music back to life.