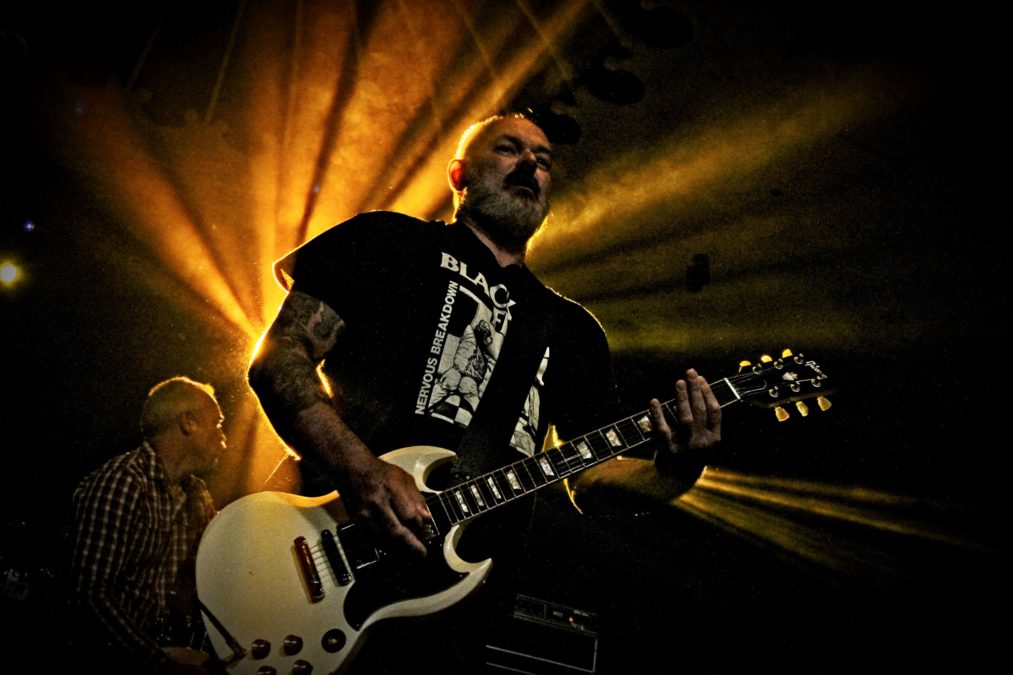 Music festivals are back kiddies, and back with a vengeance!

As much as I would have loved to have gone to both, commitments allowed for only one so it was with much excitement I strapped on my stepping out boots on the Sunday for a day of musical nostalgia with a host of bands I first saw when in or around my teens!

Now, to address the grey beast in the room straight away.

Yes, the outside stage was pretty much still set up, and no, there was no rain to be felt throughout the day BUT extenuating circumstances earlier in the week coupled with an extreme weather warning forecast gave organisers and the venue little choice but to sacrifice one stage for the sake of allowing the show to continue.

This meant a large number of bands had to be cut from the lineup – although most of them have been slated to appear together at another venue in the not too distant future – but there was still enough class and variety in the remaining lineup to give punters bang for buck.

It also meant the day had to start earlier and finish later, and also unfortunately meant I had to miss the first few and last two bands…

I got there just in time to see The Meanies explode onto the indoor stage. Forgive my ignorance here, but this was the first time I have managed to see The Meanies live and what sucks even more is now I know what I have been missing out on!

Their punk dominated sound was loud, brash, and uncompromising, everything you would want to fire up your day.

I did chuckle to myself seeing Link Meanie in a big jacket and other band members wearing button up shirts. Don’t Southerners know by now that it gets fucken hot in Queensland?

The only thing that tarnished the set for me was the continually piercing white stage light that threatened to burn through the crowd every time it was engaged.

A) It’s still daylight so why?
B) Has anyone, ever, anywhere, known of someone going up to the lighting desk and saying to the lighting guy “do you think you could use more of those blinding white lights that irritate the fuck out of everyone?”

The Hard-Ons were up next and these guys know how to get a party started!

Tim Rogers cheekily waved his ass in the crowds direction in a trance like swagger before facing the crowd and bursting into voice amid beautifully distorted guitars and feedback that epitomised everything we love about the rock/punk life.

The band was as tight as they were fun, with Rogers at one stage bemoaning the band’s five minute warning by exclaiming “We’re not even drunk yet!”

Ten minutes later, with yet another epic, drawn out jam session, The Hard-Ons subsided and it was time for The Gateway Plan to take centre stage.

These guys had a big, expansive sound with nice two part harmonies but were perhaps too much of a drop in pace after The Hard-Ons, which in turn detracted from what would have been a great set maybe a little earlier in the day and most definitely not wedged between The Hard-Ons and 28 Days.

I last saw 28 Days at the turn of the millennium and despite possibly enjoying one or two too many new years cocktails I remember leaving the show underwhelmed.

Promising to “play old songs all night”, 28 Days were true to their word, tearing through Goodbye, Say What?, What’s The Deal? and, of course, Rip It Up with the tenacity and ferocity of a band, well, twenty years younger.

By the time the familiar chant of “28 Days Can…” was eagerly met with “Fuck Off” from the crowd, the metal/rap crossover hybrid outfit had proved emphatically that maybe I was a little too pissed all of those years ago…

Bodyjar followed, ripping through tracks like Get Out Of My Head, Is It A Lie, One In A Million and Not The Same in their usual harmonious punk manner. To add to the festivities a blown up beach ball appeared from the clouds before being unceremoniously belted from one end of the room to the other. Just like old times!

Magic Dirt emerged amid a wall of feedback that was strangely comforting, before Adalita struck up a powerful riff that was as loud as it was beautiful.

Playing an assorted mixture of tracks ranging from blues/rock, to hard rock to radio friendly numbers, Magic Dirt transgressed each decade of their career with a brave best of set that highlighted their extreme musical talent.

Killing Heidi have always been atop my list of adolescent bands, with their youthful defiance coupled with tempered rock sensibilities ushering in a whole new playing field of accessible rock back in the late 1990s and early 2000s.

The outfit on display today bore little resemblance to that of twenty odd years ago, but that still didn’t stop them pumping out hit after hit with Weir, Superman/Supergirl, I Am and Mascara still sounding as vibrant as the day they were released.

The set at times resembled a live karoake segment, with Ella Hooper bouncing around stage and engaging the crowd at every opportunity but I found it hard to relate to tales of teenage romance and the perils of youth when everything still seemed so sickly sweet, but by virtue of years elapsed could never be as innocent or pure.

12 Foot Ninja announced their arrival via a recorded intro – as expected – and from there went on to completely decimate anyone within earshot with a sporadic and eclectic collection of tunes that were more schizophrenic than Animal House.

Kin Etic‘s vocals are superb in the live arena, his at times hauntingly surreal and others menacingly abstract vocals almost defying belief.

These guys are a band definitely best served live on stage, with their timing and structure changes, coupled with off kilter effects and menacing presence ensuring 12 Foot Ninja are, and will always be, the type of band that leaves you looking at your mate with a WTF look on your face.

The band invited Kayla on stage for a couple of tracks, and I don’t know who she is or where she came from, but the girl can sing!

She added another dimension to an already multi dimensional musical universe, with the resounding echo of applause as the band finished with One Hand Killing humbling to witness first hand.

Tex Perkins and the Fat Rubber Band sauntered onto stage next, and, admittedly, I had early reservations about the scheduling of Tex’s set between 12 Foot Ninja and Shihad.

And, sadly, those reservations were on the money.

Don’t get me wrong, I LOVE Tex Perkins and the acoustic/electric interplay between he and Matt Walker were among the highlights of the day, but the set took a crowd that were gradually building to a crescendo and lulled them into a state of serenity that didn’t make sense.

Tex played a selection of his own songs plus The Honeymoon Is Over from his time with the Cruel Sea but it feels strange to say that despite me thoroughly enjoying his set it just didn’t feel right.

I’m sure the powers that be had their reasons for putting Tex on at this time, and I might be in the minority here, but to me it just pulled the momentum back a touch too far which would make for difficulty recapturing as the last three bands of the night prepared to take stage.

Not that it really mattered when Shihad rumbled onto stage, the kick drum snapping eagerly before the guitars took centre stage and the boys from New Zealand lurched into Tear Down Those Names, seemingly intent on single handedly restoring hard rock to its rightful place in everyones ear holes.

With minimal stage lights except for a menacing wash of red, Shihad lurched from one classic track to another, powering through Get Up and their cover of I Got You by Split Enz before finishing off with an awesome rendition of Home Again.

Due to reasons I won’t go into here I had to leave straight after Shihad, meaning I missed You Am I and Wolfmother but from all reports both bands did their headlining status proud.

Big props have to go to Silverback Touring for taking a punt on Australian music in these troubled times and having the vision and patience to pull something like Uncaged off!

May there be many more incarnations over the coming years.