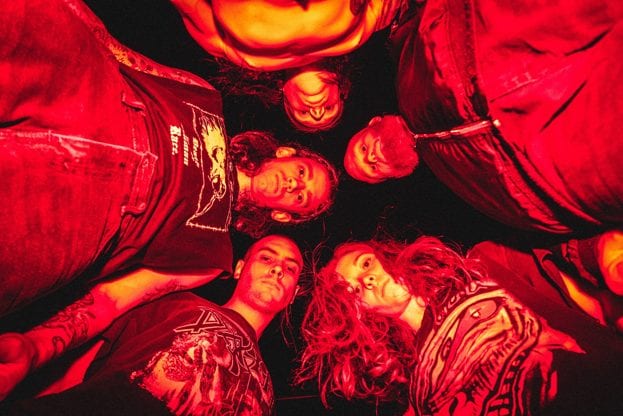 Code Orange have unveiled their official music video for “Bleeding In The Blur.” The video, which was directed by Max Moore, is streaming now via The Fader who also spoke with the band’s Reba Meyers for a Q&A about their acclaimed new LP, FOREVER.

Watch the official video for “Bleeding In The Blur” here:

Recorded with producers Will Yip at Studio 4 and Kurt Ballou at GodCity Studios, FOREVER debuted earlier this year staking its claim as one of 2017’s top releases. The US press raved about it, with Rolling Stone selecting Code Orange as one of 10 New Artists You Need to Know: February 2017 exclaiming, “FOREVER captures some of the most punishing noise the band has recorded to date, featuring songs rife with sudden transitions to still-harsher textures.”  The Fader featured Code Orange as one of their 13 Artists You Need To Know About In 2017, while Nerdist declared, “Code Orange is back and heavier than ever,” adding, “These kids were heavy before, but they just increased density by a hundred percent and then crushed all livings under their weight.” NPR praised Code Orange’s FOREVER, asserting that it, “…is among its most bruising works, with surprises throughout,” while  CLRVYNT hailed FOREVER as Code Orange’s, “…most depraved set of grooves yet,” asserting, “…don’t underestimate the quartet, ’cause they’re out for blood.” Media around the world followed suit. FOREVER is available at all DSP’s (http://Flyt.it/forever) with physical copies available at Code Orange’s official merch store.

Next month Code Orange kick-off a run of European dates which will see the Pittsburgh, PA band supporting System Of A Down on their headline tour and call into the UK’s Download Festival, as well as a single show in Brighton. Tickets for all dates on Code Orange’s upcoming run are available here.  Code Orange will then return to the states in July for a series of festival performances. For up-to-the-minute news and ticket information please visit http://codeorangetoth.com/tour/.

** Direct support for System Of A Down