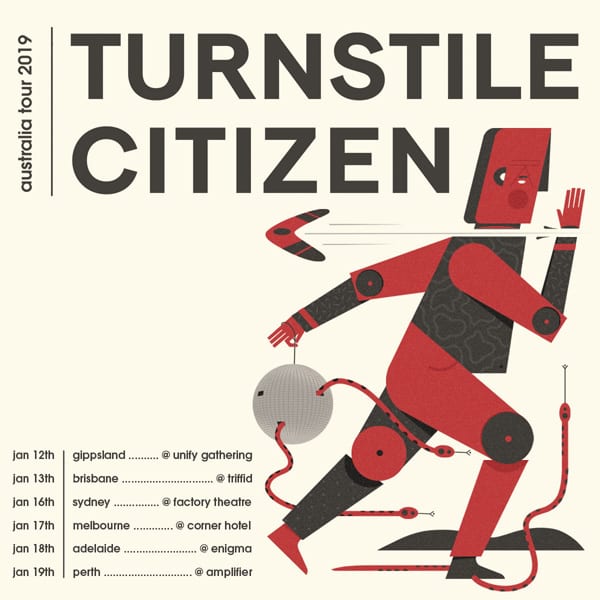 What better way to unwind after a stinking hot day, than down a couple of cold ones at a punk rock show. Tonight, the adrenaline is pumping, because I’m taking in Baltimore hardcore outfit Turnstile, a band I’ve wanted to see for some time now. It’s an interesting line-up, with all three bands on tonight’s bill classified as “hardcore”, but all offering a totally different sound to one another.

First up, it’s up and coming Central Coast hardcore outfit Rage. This band has been turning a few heads since shifting from a side project into a full-time band and have already supported the likes of Pennywise and The Bronx. Short, fast and loud, they warmed up with a blast of White Stripes, before giving the crowd a high-octane set consisting of tracks from 2017 EP Feel The Burn, as well as a few others. With a tight interfusion of drums, bass and rhythm guitar, they combine break-neck speed with catchier, mosh-friendly sections, and had the rowdy mob of early arrivals rocking out big time. Keep your eyes and ears open for more from these guys in the future.

With the crowd building nicely, Ohio indie rockers Citizen were greeted with a welcoming roar, and only a few bars into the set opener, “Sleep”, the punters were singing along with Mat Kerekes in full voice. Citizen has been classified as emo-pop, post-hardcore, pop punk, grunge, and shoegaze. Their sound has evolved over the years, and no matter what genre you put them in, they are an amazing live band. This was my first time seeing them live, and I was completely blown away! Captivating, and immensely powerful, Kerekes and the rest of the band pulled everybody in and took us on a sonic journey with their dynamic, mesmerising sound. Tracks such as “Jet”, “Roam The Room”, and “Sick And Impatient” all getting avid reactions from the crowd. The atmosphere built perfectly throughout the set, and they had the crowd in a lather of ecstatic sweat. Upbeat rock song “The Summer” was the ideal choice to send them over the top and end a fantastic set on an almighty high.

Perhaps the boys from Turnstile knew that they had to deliver something special to match Citizen’s set, and with that in mind, they came out firing! Hot on the back of 2018 album Time And Space, they launched into the mosh-inducing “Real Thing”, which instantly had the crowd back up. From there, there was no let-up, with tracks such as “Gravity” and “Generator” drawing a frenetic response from the pumped crowd. Each member of the band barely stood still for a second, with vocalist Brendan constantly leaping, dancing, headbanging, and waving to the crowd, often jumping down into the security pit and holding the mic out to the crowd, encouraging them to sing….and sing they did. Loud!

After a brief hip hop interlude with “Bomb”, they cranked it up again with “Don’t Wanna Be Blind”, which saw some punters engage in a little bit of crowd surfing and stage diving. Older tracks “Fazed Out” and “Out Of Rage” also had the crowd going berserk. They closed the set with “Moon”, with bass player ‘Freaky’ Franz Lyons delivering the vocals…although he was barely needed, with the crowd screaming every word along with him.

Despite being labelled a hardcore band, Turnstile combines elements of Soul, rap, rock, psychedelia, and R&B. And, while the comparisons to Rage Against The Machine are never too far away, what really sets them apart from other hardcore bands is their attitude. They defy the traditional boundaries of the genre by focusing on positivity and honesty, rather than aggression. The result is a live show that is highly energetic with a great vibe, and this is what draws new fans in, and keeps the old ones coming back.