Now that the film has been playing in cinemas for a few weeks we dare to list 5 of the best things about Thor: Ragnarok but be warned there will be several spoilers below. 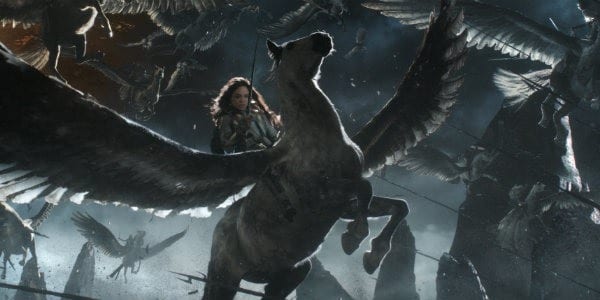 Valkyrie is cut from the same cloth of most action anti-heroes. She was a warrior, there was a battle, and she lost everything. Now she’s working as a gun for hire compromising all her old beliefs and drinking heavily to drown away the painful memories that won’t let go. She’s also still pretty kick-ass. Having the character be played by an African-American woman makes the trope feel fresh, but Tessa Thompson’s performance is what makes it good perfectly conveying pain in one moment and then pratfall humour in another. Her saunter off with Hulk to do training is one highlight. Another is when we see her flashback, unlike a lot of serious moments in the film that are undermined by cutting away to a joke there is none of that here, and it’s a good choice. Can’t wait to check out Valkyrie in the future and see how her relationship with Thor develops. 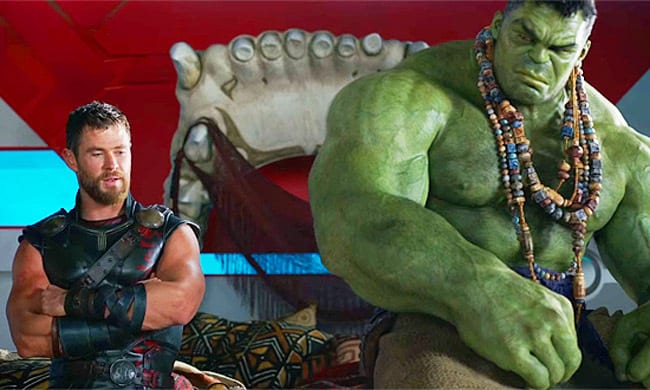 The choice to have Hulk (Mark Ruffalo) evolve in this film without turning back into Bruce Banner for ages is a good one. He now has the maturity of a toddler and a scene where he throws a tantrum and argues with Thor is one of the best character-based beats of humour in the film. Their make-up after is even funnier where the angry green giant insists “ But Hulk like real fire. Like… raging fire. Thor like smouldering fire. 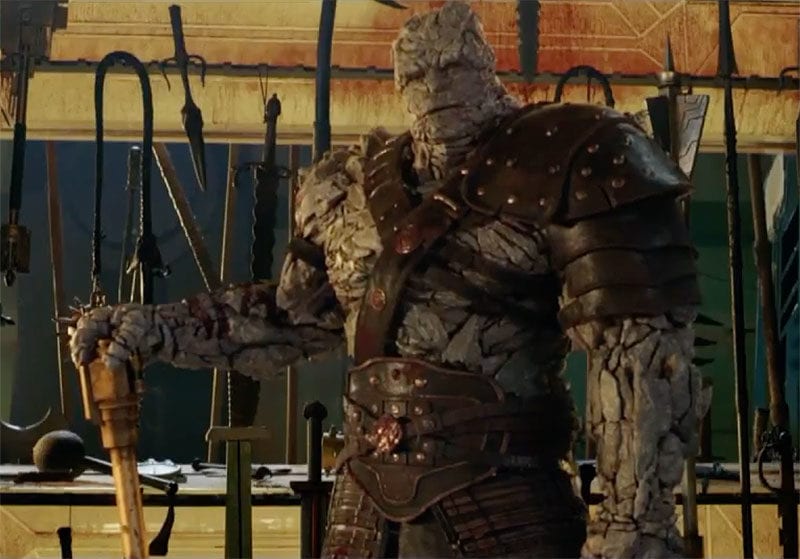 This might cause some controversy; it could create friction around the Heavy office. Some have declared Korg (Taika Waititi) the Jar Jar Binks of the Marvel universe which is, and this is appropriate to use this here, saying something. Some of us may not go that far; there is no doubt that Korg is dry and funny in notable moments where dramatic stakes are unfolding and should be felt without cutting away to a joke. As director Taika Waititi has shown in previous films like Hunt For the Wilder people that he can revel in the drama and not gloss over realities with a joke. In Thor: Ragnarok that is often the case and often Korg is at the centre of it. On the other hand, some of Korg’s lines are the funniest in the movie, and for some, he’s going to a highlight. The best example may be his meta summation of Thor’s relationship to his hammer.

Should it be any surprise that Cate Blanchett will probably go down as the most valuable player in this production?  Yes, she’s vamping it up, strutting around with some hip swagger in a tight leather outfit, yes she’s playful and layered in the way she mockingly bosses around macho Karl Urban but there’s more to her performance than the am award-winning actress playing it broadly for a blockbuster. There’s pain in lines like “I thought you would be glad to see me.” and bitter anger when she reveals Asgard’s past. Hela might be a crazy dictator, but she’s also discarded warrior and abandoned daughter. Again a lot of these scenes aren’t played for laughs and all the better for it. 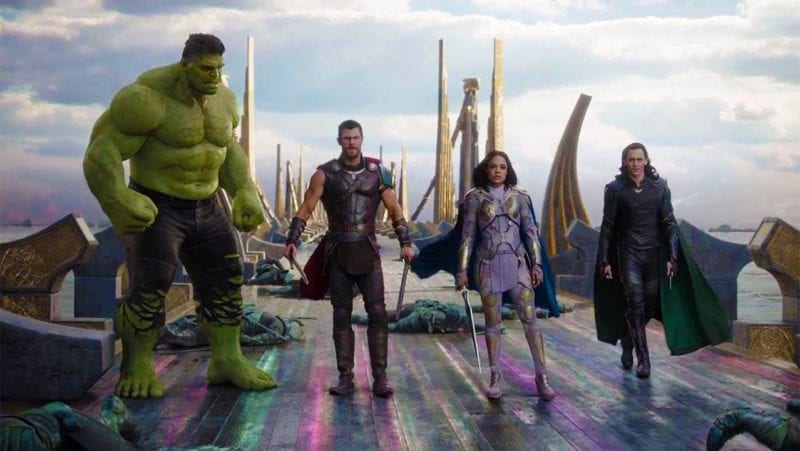 Again we might be heading for controversy here, Thor’s characterisation has been pretty thin throughout most of his films. We know he was a pretty arrogant guy who got humbled from the first film’s events, we know he’s noble in spirit, loyal to his comrades and loves a good stoush and Natalie Portman. Not necessarily in that order, he seems to be adjusting well to life without Jane Foster coincidentally. In this film, he seems to be a lot funnier than previously and that might play badly with some fans. Case in point is this opening scene where he interrupts some exposition from an opponent to comment that he can’t see him as he is tied up in chains and spinning away from his line of sight. For some, it will be a funny laugh. The opening scene has those kinds of laughs and some great action set to Led Zeppelin’s Immigrant Song. It concludes with Karl Urban who was making headway with some beautiful Asgardian damsels getting covered in dragon slime. It may just be more exciting and funnier than anything else in the rest of the movie.

Well, that’s our Top 5 but let us know in the comments below what your Top 5 Favourite Things were about Thor: Ragnarok.

Lloyd Marken has a deep and abiding passion for cinema having grown up in the age of the blockbuster and remains a lifelong fan of Steven Spielberg. Over the years he’s done a few different jobs whether working as a hospital wardsman, a production runner on Margot Robbie’s second feature ‘Vigilante’ or serving in the Army Reserves. His love of film and all of the arts has manifested in him writing about them both and he has recently had reviews and interviews published online with ‘Scenestr’, 'Buzz' and ‘Heavy’.