During the mid to late nineties, the Australian music charts were a very different scene. Pop was almost a bad word as hard rock, alternative and grunge bands ruled the airwaves. High school students sat around at lunchtime listening to the haunting strains of albums like Throwing Copper and Nevermind.  Another album on high-rotation for those onto the rockier side of things was Sixteen Stone – the debut album for British grunge band Bush. Tracks like “Glycerine” and “Comedown” very quickly found themselves on radio and the end result was Bush becoming one of the most commercially successful bands of the 1990s.

In 2002 the band parted ways but then in 2010 they resurfaced at the Epicenter Music Festival in California and since then have subsequently released three albums with a fourth due this year. Now Bush have announced that they will return to Australia to play alongside +Live+, Rose Tattoo, Stone Temple Pilots and Electric Mary for the Under The Southern Stars Festival. HEAVY Magazine sat down and chat to front-man Gavin Rossdale about the tour which you can read or listen to below! 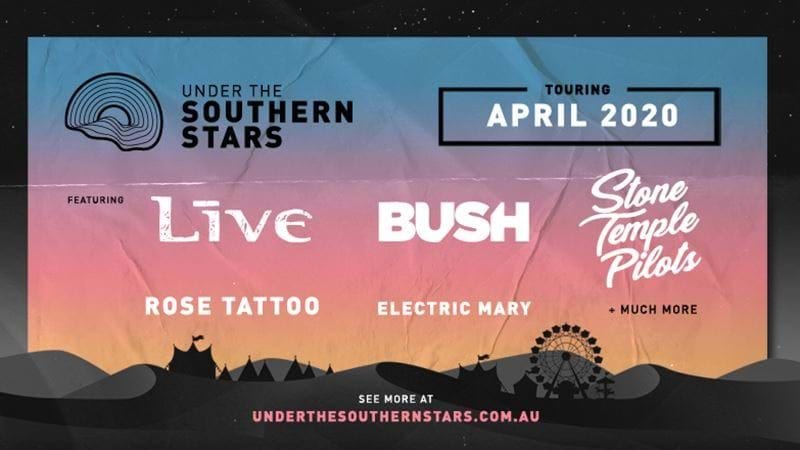 “I can’t wait to head back to Australia and burn by nose,” he says laughing as I chat him as he prepares to go on stage for another show in the U.S. “First off we are really excited about heading back to Australia. We were at Soundwave I think about five years ago and it was such a great time I was like ‘this is amazing… why don’t we do this more often? Let’s do this again.’ Cut to five years later, but that is just the way things go, so that is the most exciting thing for me… I don’t care who I come with. But we did a tour last year with STP (Stone Temple Pilots) and we are doing a tour this year with +Live+, so I guess they both like touring with us because we got them both for this Australian run which has made me really happy because I like the bands and I like the people. That is a great way to tour because you want everybody to do well and you want everybody to have a good time.”

Our conversation dips back into the past as we talk about Australia’s relationship with Bush since the early days. “It was actually an Australian girlfiend I had at the time that introduced me to Nigel (Pulsford – Bush’s founding guitarist),” explains Rossdale. “Because of that I’ve always had a close affiliation with Australia so when we took the band there and had so much succsess there it meant so much. Australia also has such a great reputation for so many great live bands, so many great players so to be able to come down there and take it on was just such great fun. I don’t know, it feels like another world to me and I think it is beautiful that music can take us to so many different places, and I can’t wait to get back down there and remember why I love it so much.”

Rossdale laughs when we talk about the band’s back catalogue and how he goes about finding the right mix between the older tracks and the newer tracks. “It is really, really difficult,” he says laughing. “I have no idea what we are going to do… maybe play for three days straight. I always try to imagine myself in the crowd and try to image what people would most like to hear. It is all about satisfying the audience, I really don’t like that obscure set list stuff. I just really like it when you get people excited and you can feel that fire and energy. I’m about to play in an hour here and I don’t even know what set we are going to play here, so I should probably worry about tonight before I worry about Australia.”

The talk of newer tracks brings our discussion around to their latest single – Bullet Holes – which was used in John Wick 3. So when can we expect the new Bush album? “It is really, really close,” says Rossdale. I thought we would be done by now, we are just going through the mixes and a few bits and pieces, but nothing is that far away. All the songs are chosen so the band is done, but the producer wants to put a few little things on things and I have to go back and re-sing something that got lost on the hard drive… so it is really, really close. It will definitely be ready by the tour but we will not play too much off the new record but I think it would be nice to pepper three or four in there.”

From there we talk about the fact that Bullet Holes is a lot heavier than some of the music that Bush have brought out over the years and Rossdale agrees that it could be because the band have become influenced by some of the metal bands that they have been playing with recently. “I think listening to a lot more heavier music has got me to enjoy the music, I like the singing of it a lot,” he explains. “There is the feel, the heavier part of it that I really enjoy, our last record, Black And White Rainbows, had kind of a bruised genesis and this has a more aggressive approach to it. But my version of aggressive is not like head-butting it is more deep and powerful.”

Seeing Bush in full flight is an experience that every music fan should have at least one in their life-time. This tour is going to be amazing and I get a distinct feeling that The Mind Plays Tricks On You is going to be pretty special as well.