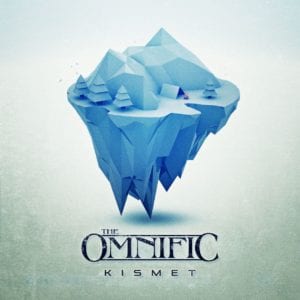 Melbourne scores points once again on the progressive music front, with the latest offering from its progressive funk trio The Omnific, a band that till now, I hadn’t heard of but who have very quickly won my heart and my ears over.  Progressive music can generally,  be quite a hit and miss for me, especially if it’s instrumental. However, this three-piece outfit has very elegantly established themselves, first with their debut EP Sonorous, and now with its follow-up, Kismet, a musical offering you cannot turn away from. Unbeknownst to me, two bassists and a drummer make this band; once I found out that little piece of information, I was sold – and rightly so!

“Proem”s beautiful intro gently kicks things off, eventually unveiling the song’s  melodic, funky and rather soothing personality.There is no shortage of groove from the get-go; strong, down tuned bass lines proving to be an extremely fulfilling sound along with an airy, atmospheric vibe that is not to be missed. A brief, moment of silence before the track breaks into another cheeky musical jive of sorts, setting the tone for the rest of the album. Now, the beautiful thing about this three-piece? It’s all bASS! Drums too of course. And, keeping to the beat of the drum (pun intended), comes funk ‘n’ jazz anthem number two; “Objets de Vertu”. What initially begins to sound like a Mario soundtrack, paves the way for a smooth, light-hearted track and is proof of the band’s brilliant musicianship. Their ability to combine such a varying array of sounds and styles, most definitely makes them a class apart. Perfect arvo tea listens, I say.

Clearly defying genre-labelling barriers, The Omnific continue to impress you with tracks like “Bugbear” which has a much more mellow dynamic, exhibiting the band’s creative use of synths and comforting sweeps, while title track “Kismet” brings forth the sheer magnificence of that double bass guitars. With catchy riffs and an enchanting melody that runs the length of the track, it proves its worth as the title-holder, not to mention the punchy style of drumming adding that perfect djent element. The groove-laden passages come in unpredictable spurts, and this becomes common throughout the rest of the album, something that I liked. The musicianship and instrumentation will continue to captivate you as each track seamlessly envelops it’s listener in aural bliss.The technical ingenuity that they possess is amazing, as they effortlessly manoeuvre in and out of fun, rhythmic tunes to more complex djent-embracing riffs.

A light and mesmerising “That’s All She Wrote” comes as a pleasant interlude of simplicity, proving that such an aesthetic brings out the elegance of purely instrumental music as “Condemned” also proves to be an entity of its own with a lullaby-like drum beat and tone, the funk ‘n’ jazz element gradually coming in to grab your attention. Heavier and choppy,  “Ersatz”, is without a doubt one of my favourite tracks, probably the heaviest on this release,  with it’s addictive and trippy rhythm, fast tempo and weirdly oriental-sounding melodies, it’s like ‘Aladdin meets Animals as Leaders’. It starts and stops before you even realise and if I have anything to pick on about Kismet, it’s that they didn’t make Ersatz longer. “Sonorous Pt. 2” concludes this beautifully crafted EP, yet another sweet composition of emotive and free-flowing music, perfectly complimenting the strength and intensity of the bass guitars.

Each of the eight tracks presents their tune, their own story and their mood, making it near impossible to lose your attention span. Like a musical labyrinth of sorts, The Omnific take you on a colourful, and expressive journey that will no doubt bring a few surprises along the way (love that piano). Kismet delivers an amazing culmination of sounds and arrangements that are woven together with crisp basslines, chunks of the heavy groove a few dance-worthy moments and of course, the production that is top-notch. Easy on the ears, heart and mind, this band’s take on progressive instrumental music comes as a refreshing change to what we normally hear and certainly places them amongst the more well-known acts in a similar vein. Topping their debut EP with their latest one, I’m keen to see what the future has in store for this band. KIsmet drops on the 24th of November! Check it out.