To say the past couple of years have been huge for Hands Like Houses is an under-statement. That time has seen the band’s popularity rise in the US and Europe and now that ground swell has also spread back home. That time period has also seen the band’s track ‘Monster’ snapped up by WWE making it a Spotify juggernaut, the release of their chart hitting album Anon and now the resulting Australian tour has seen so many tickets sold the band has had to upgrade to bigger venues.

To find out what it has been like to be a member of Hands Like Houses during that time HEAVY Mag caught up with Trenton Woodley while the band was preparing for the tour.

“It has kind of been nice to sit back and watch it,” says Woodley without a hesitation. “Being in a band can be a full-on thing, I mean you have to be on top of so many different things, especially being a global band, an international band with all the stuff that we are doing everywhere we feel like we have to be on top of things all the time, so to be able to sit back and watch things happen has been nice. It has been to sit back and just take it in as its own thing, all the stuff with WWE and Fox8 has been really cool but now we are waiting to see what that all turns into like will it draw people to our shows, will we crack the Hottest 100 this year… we just have to sit back and see where it goes.”

“This was a scary one to book,” admits Woodley when our conversation turns to their tour. “We’ve sold out a few shows over the past few years but this time we decided it was time to aim big… that in itself is as nervous as it is exciting. We’re both nervous and excited because of the size of the rooms that we are playing, we are like ‘holy crap these are venues that we have seen massive international bands come through over the years.’ It has given us room to be a little bit creative with some of our production, we’re planning our staging at the moment and putting together the final plans to see how it goes. But yeah we are excited to get out there and we have some fantastic supports with Ocean Grove, RedHook and Endless Heights.”

You can listen to our full Hands Like Houses interview on Spotify. All the details for the tour are below. 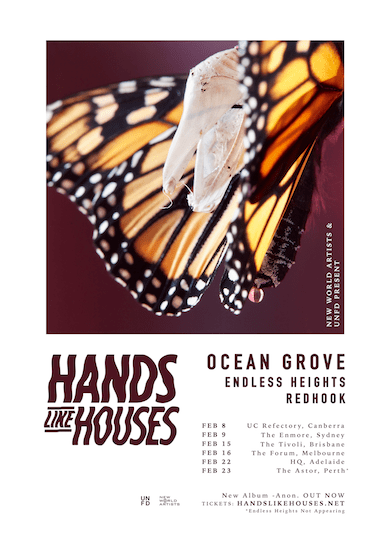