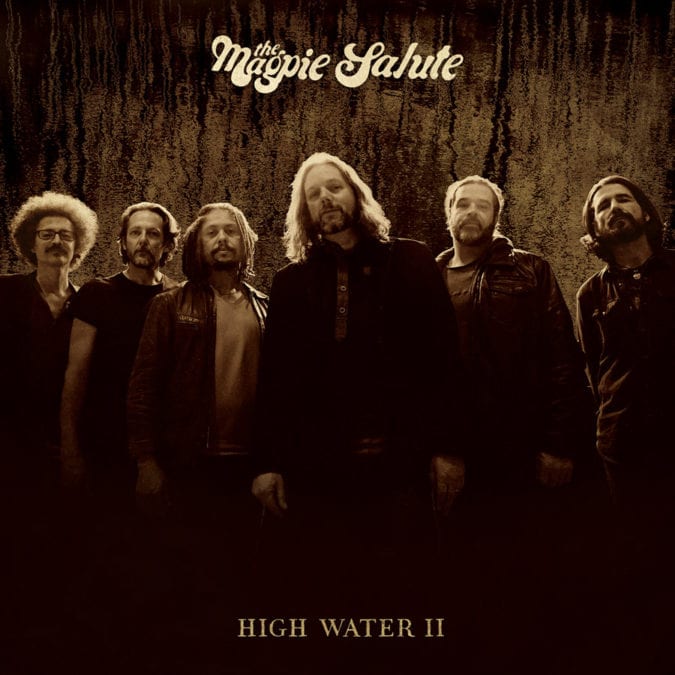 It could be said that one of the definitive signs of a great guitar player is how instantly recognisable their playing is. Take the nasty-groove strut of Slash, the majestic ceremony of Brian May, the slick yet meaty lightning of Eddie Van Halen. This is also a hallmark of Rich Robinson, co-founder of The Black Crowes, whose cosmic blues steeped in southern influences are just as ear-pricking. Robinson’s distinct sound is now encased in The Magpie Salute, a band assembled by Robinson which also recruits former Crowes comrades Sven Pipien and Marc Ford. Robinson and co. are due to return with their second LP of studio material, High Water II on 18th October. Having written many of the songs during their work on High Water I [2018], High Water II unveils the songs The Magpie Salute have kept up their sleeves. High Water II runs from the same river as High Water I but arguably delves even deeper to create a more comprehensive showcase of the band’s matured talents.

High Water II is rich and luscious in texture and colour, laying out a serene collection of Van Gogh-esque landscapes, from vibrant country fields to mystical starry cosmos. In painting these visions, The Magpie Salute exhibit their virtuosity in their employment of timbre. Keys and piano from Matt Slocum add a twilight twinkle, a spacey sheen and glimmering specks of sunlight across the tracks. Pipien’s bass adds a deep-rooted rumble and tantric, swirling pulses to the likes of “You And I” and “Life Is A Landslide”, whilst guitar workings from Ford and Robinson intertwine to create smoky voodoo grooves in “Where Is This Place”, country road-trip sunbeams, bolstered by the addition of jubilant horns, in “In Here” and scurrying rush hour urgency in opener “Sooner Or Later”. All the while, drummer Joe Magistro adds percussion that thickens the soundscapes like the throb of forest wildlife.

With these various shades of instrumentation, The Magpie Salute reject genre pigeonholing. They paint from the palette of 70s blues in “Doesn’t Really Matter”, twisting through a hunk of biting groove, whereas “Mother Storm” floats with tranquil acoustic Americana, and ”Gimme Something” flirts with brassy Motown glamour. High Water II opens itself up to several vocalists. Primarily, lead vocalist John Hogg hits many sweet spots with his range of peaceful, lazy-river melodies and wisened grit’n’soul, but High Water II also sees the earthy low registers of Robinson on “Life Is A Landslide” and Ford on “Lost Boy”, who is joined by the saccharine velvet voice of country songstress Alison Krauss.

Unsurprisingly, High Water II offers plenty of Crowes spirit to grapple ahold of – The Magpie Salute may be presented as a different kettle of fish (birds) to Robinson, Pipien and Ford’s previous era, but the classic signatures placed on their craft are evident. Creepings of Amorica [1994] and Three Snakes and One Charm [1996] are particularly prominent across High Water II, and even Hogg’s vocals are a near relative of the fervent soul that narrates these works. Glints of the Crowes certainly live on in The Magpie Salute.

There’s an organic rise and fall flowing within the tracks of High Water II, as if they reflect the rhythm of the sun and moon. High Water II is a crafted journey that’s not only audibly stunning but is also visually striking to the mind’s eye. The album doesn’t offer instant smack-in-the-face hits, but it offers a sophisticated beauty that blooms further with each listen.