It was during Gene Simmons solo gig in Melbourne in 2018 when KISS fans found out that their favourite band would be returning to our shores in the not too distant future. That moment caused euphoria at Festival Hall at the time. That euphoria is now tinged with sadness though as fans come to the realisation that the next time they see these legends of rock live it will also be the last time they see them.

When HEAVY Mag recently had the chance to sit down and chat to Tommy Thayer we found out that the bar shares those mixed emotions. “We feel good but I am still getting used to this being the last tour,” he explains. “So far in America and Europe we have done 95 shows this year and we still have about 20 to go, with I think 8 in Australia. I still just love being out there and almost all the shows have been sold out so it has been incredible here and we are just looking forward to bringing this show over there because it is definitely the biggest show that we have ever done and I know that sounds clichéd and I’m sure you’re thinking ‘I’ve heard that before’ but it is literally the biggest and best show that we have ever done…. there is no doubt about it.”

“It is emotional,” he continues. “Every night we go out there and we see the smiles and then there are tears in some people’s eyes and that kind of surprises me sometimes because I am not ready for that. But you see people with tears, but there are also tears of joy from people that have loved the band for such a long time, but it means a lot to us and to be on stage each night is just phenomenal and to see their response we just couldn’t feel better about it. But it is great that the band are out there and there is more than just one age. These days at a KISS show, there is every age, it is multi-generational, there are families, fathers, with their kids and everybody is in make-up… it is a party! It is more than a concert, it is an event and a celebration.” 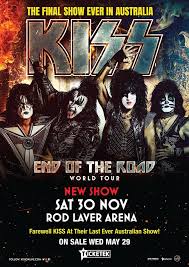 That leads me to ask Tommy about what it is like having fans that cross the generations because even here in Australia we see kids getting around in the same KISS shirts that we were in the early 1980s. “The who multi-generational thing is actually kind of bizarre,” he admits. “Sometimes I ask kids ‘how did you get into KISS nowadays and what makes you want to come and see this band?’ and a lot of the time they say that their parents were into it and then they kind of passed the torch or maybe it is because the world is a smaller place and we are all interconnected with the internet and we see and hear everything. People have been seeing the show on Youtube and online and I think that has really helped us, some bands don’t like the Youtube era because they feel that it gives away some of the magic and secrets they have for their live shows but I feel that it has really spread the word. But I don’t know we also do a lot of things outside of the box… I mean we did a KISS and Scooby Doo movie a few years ago and I know a lot of kids got turned onto KISS from seeing that movie, it was a cartoon of course but all of the music was in it and there a lot of things like that. It is a strange phenomenon but it blows me away. I don’t know how it happens but it does and it is the strangest thing.”

We then move the conversation to the special relationship that KISS has with Australian music fans. “You’re right when you say it is a special relationship,” he says. “When the band went there in the early 1980s it was like Beatlemania. Every morning the newspapers would have headlines about what KISS was doing and people wanting to know if they could see them without the make-up. It has been a great relationship and every time we have been down there it has been phenomenal and Australia is definitely a very special place for KISS. We’ve had a lot of great experiences and we love coming down there and the people and the culture, being in the cities like Melbourne, Sydney, Perth and Adelaide… all of them. There are great wines, you have some great vineyards down there that we have been to, there are great restaurants… we’ve had many great experiences down there… and you’ve got a lot of beautiful  women down there.”

Make sure you take a listen to our full interview on Spotify because Tommy also talks about what it was like working with Jimmy Barnes and gives us more of an insight to what Aussies can expect from this KISS tour.