THE HARD ONS ‘I’m Sorry Sir That Riffs Been Taken’ 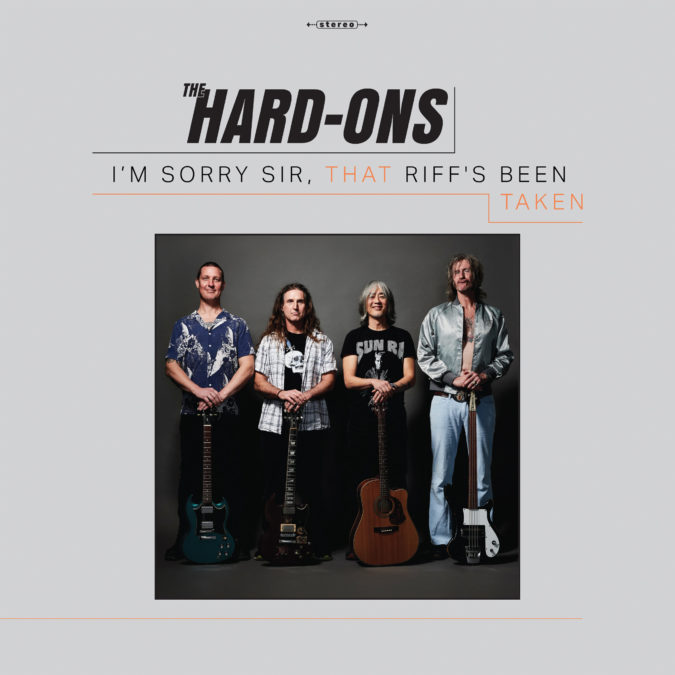 Firstly, I’ll start by saying that I had the pleasure to mix this band at the Miami Shark Bar many years ago and they were honestly the loudest band I have ever heard on stage. With a PA oversized for the location I struggled to get the vocals up over the screaming guitars, driving bass and thumping drums. Good times, and a great hard rocking band.

Now, the band has had a recent line-up change and handed vocal duties over to You Am I’s very own Tim Rogers. What should we expect of this line-up change? Who the hell bloody knows, but I’ll give it a listen and see how it all goes.

Hold Tight kicks off with some thumping toms and strummed out guitar chords before we hear our first taste of Tim Rogers vocals. I’ll be 100% honest about this, the track sounds nothing like what I remembered from that ridiculously loud band back at the Sharky. Is this some kind of newfound pop sensibility that the band has stumbled into with their new Top 40 vocalist? Anyway, it’s a pop song, a good one, but a pop one.

“This is such a fucked-up party” is exactly what Tim tells us from the get-go in the aptly titled Fucked Up Party. This song reminds me more of those super loud bastards I mixed back in the day. It’s hard rock, with a good punch of punk, and they say fuck a lot which makes it a really fun track. Someone lost their cat though, which is a bit sad.

A few quick guitar stabs and a rolling bass line prepare us to Pucker Up. This track has a really good heavy punk rock feeling and the sputtered guitar licks keep it interesting. Some kind of surfing safari style riff takes off mid song and we hear some weird, mumbled scat type vocals before the guitars embark on an adventurous solo. Another fun track!

Drums, Bass, guitar licks, and weird spoken word reverb saturated vocals create an unusual vibe for Lite As A Feather. It’s still pretty rocking, but until it hits the chorus it just seems like an odd collection of punk rock musical elements. The chorus is catchy though, and we start to hear that pop sensibility again.

Back Pack Sweat, that sounds pretty gross. Well, the songs pretty grouse from the get-go with its punk infused rocking and rolling. A solid bass line flows throughout and really keeps the song together. Clocking in at 1 minute and 23 seconds it’s over just as it gets started. Quick and catchy which is all it needed to be.

Not quite sure what’s going on in the next track Frequencies, but the bass frequencies are weird due to some strange effect that I just can’t quite put my finger on. Not sure what the plan was with this track, but The Hard-Ons may have just invented Math-Punk. And yes, I’m trade marking that.

Home Sweet Home opens with a heavily distorted bass line, some simple guitar chords and a nice touch of sputtered hi-hats. When the song takes off, we hear a pretty simple drum rhythm over a smoothly flowing bass line. The vocals come in nice and clean, and the song become a nice little pop punk number. An 80’s style clap section through the middle of the track adds some extra flavour and takes us into the songs bridge. Cool track for a pop song.

Heavy is what Humiliated Humiliator is. Heavy as in metal heavy. It’s an odd song, and unlike nothing I’ve heard from these guys before, which honestly isn’t really much apart from the one time at Sharky band camp. A few quick guitar solos add the usual rock flavour of the band to the track.

The Laws of Gossip, what are they? Fuck knows, but maybe the track will tell us once it stops rocking out like it does right from the get-go. And it does, but I’ll let you listen for yourself so you can catch up with all the latest gossip yourself.

Is that a piano, or some kind of weird stringed instrument I don’t even know about yet, that I hear at the start of Needles and Pins? I’m not sure what is, but that doesn’t matter in the big scheme of things, but whatever it is it jumps in and out of the track over pre-choruses and choruses. It’s an interesting flavour over the soft rock, pop punk flavour of the track. Harmonized vocals also rear their ugly head in another interesting twist. Weird but strangely catchy track.

Shove It Down returns to a classic hard rock/punk formula with a classic 4 chord riff, 4 to the floor drums and catchy sing along lyrics. The song breaks for the bridge were a simplistic guitar melody leads us into a rocking guitar solo as the songs picks up a little pace.

Closing track Shoot Me In the Back takes off at full pace as another heavy rocking punk style tune. It pulls back a little in the verse to allow some melodic vocals to push through the mix. As the songs hits its chorus, they twist the knife a little and it becomes a catchy little number even though it’s a little bit stabby stabby. We get another guitar solo mid track which is emphasised in part by thumping drums and a solid rolling bass line. Dual guitars lead us into the end of the track and the end of the album.

Is this classic Hard-Ons? I’m not really sure, because as previously mentioned, I’m not schooled on their whole back catalogue. When it does rock out, it rocks out hard and takes me back to that band I mixed that was just so God damn loud.

Has Tim Rogers added a new flavour to the band? Possibly, you can tell that it’s him and it appears that there is some input from him in the song writing. But again, without a good knowledge of their back catalogue I can’t really confirm if these are new flavours or just flavoured unheard by these ears.

It’s a rocking good fun album and I’m sure you’ll hear some of these songs on commercial rock radio sometime real soon!