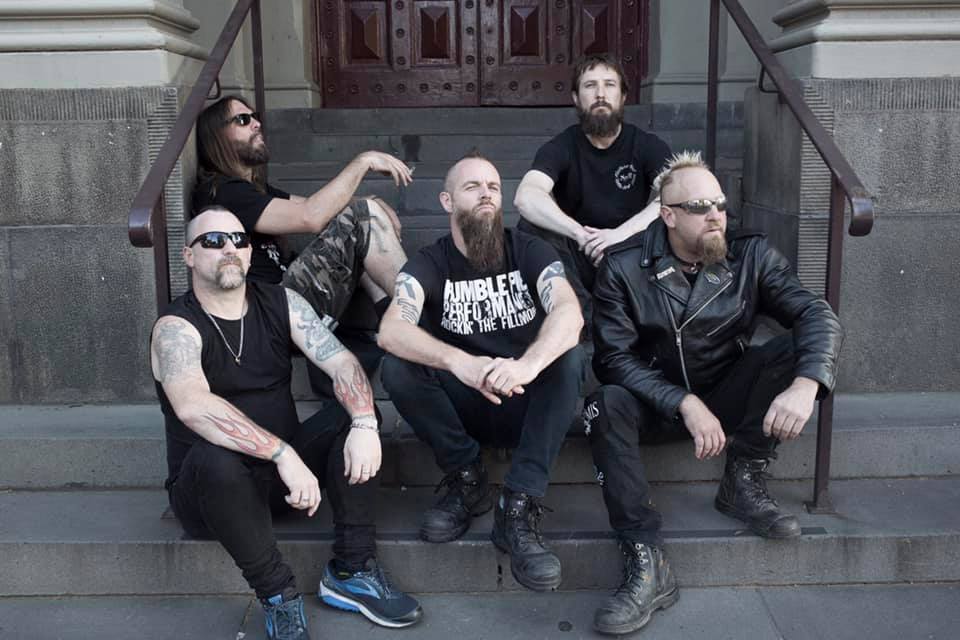 With upcoming shows in Brisvegas in a week and then playing at the annual Brewtality festival in Melbourne, Heavy had a chat with the recently re-appointed frontman of Frankenbok Dan Bok [McDougall] to discuss how both himself and the rest of the band have been reinvigorated and discovered an energy that had all but dissipated since the exit of some key ex-members and the appointment of replacements.

Frankenbok are hitting the Gold Coast and playing at Vinnies Dive Bar on Friday 26th July and will then be headlining this year’s third annual Metal Festival in Brissie titled Outmoshyama which will be held on Saturday, 27 July 2019 from 11:00 am at the East Brisbane Bowls Club. Outmoshyama is both an all ages event but will have a licensed bar area for over 18’s.

Listen to the full podcast interview above (and/or read on) to hear more on Frankenbok’s new thought process on writing and producing new material, plus what fans can expect on their upcoming shows and Dan’s insight into potential specially orchestrated additions to future shows. As a special treat, HEAVY has been allowed to feature a new song from the band “Coming Out Swinging”

“There was something definitely missing from the band with what had been going on for the last couple of years. To be honest, Dan [White – previous Frankenbok vocalist] was a really good and talented vocalist, but he just didn’t seem to take the live position with much gusto, which kind of surprised me a little bit! I thought that he would be a worthy replacement. And vocally he was, I mean he is a better vocalist than I am, but his stage presence was just something that needed to be desired in Frankenbok.”

One of the obvious questions to ask Dan was after not having been a singer or frontman for several years what was the catalyst that reignited his passion to contemplate rejoining his old bandmates. “I’d been thinking about getting back into doing vocals and my girlfriend was the one who inspired me and was the catalyst to get back into it. Then I saw Frankenbok live, watched it and thought before I really put my hat in the ring here and declare my intentions I’m gonna give it one last shot.”

So after seeing their performance, Dan articulates his purpose behind restamping his position as the main man on the Frankenbok stage by simply stating; “Right, that’s it! I couldn’t let them continue. To be honest, the band were really fucking smokin’ but they were just lacking something and I felt that I could give that something back to the band. The fact is I never really left, to a degree I’ve always been floating around in the background and to be honest I was at rehearsals more than he [Dan White] was,” Dan laughs before elaborating deeper, “you know I live at the rehearsal studio so I’m always here and I was doing stuff with the band and it got to a point where the band would be jamming without him due to his work, he couldn’t make it a lot of the time and it just seemed stupid. I remember sitting out the back sometimes while the band are in there rehearsing and I’m twiddling my thumbs when I could have been in there having a crack with them and it got to a point where I thought its time. Even within the band themselves things kind of all worked out in the end cos Dan wasn’t too happy being in the band either so, in the end, things just all sort of lined up.”

Going back to the earlier question presented to Dan Bok about his motivations and catalyst to rejoining Frankenbok, the answer being his new girlfriend, but delving further Metal V asks how Dan thought he could make Frankenbok rediscover the passion that he felt they were lacking. McDougall elaborates, “I have to say it was her encouragement, she’d started watching some of our old videos and started sharing stuff with me, so I started seeing some of our stuff that I hadn’t really thought about in a long time and she started putting stuff back into my head again. The band actually recorded a full multitrack rehearsal one night and Dan wasn’t there. While that [recording] was kind of just sitting there and I thought I can have a bit of a crack at this so I did, in secret. So one night when the band was away I’d had a few beers and got a bit carried away, set up a few cameras, made a video and filmed it.”

Having set the wheels in motion further enhancing Dan’s desire and intention to become the frontman for the ‘bok once more Dan says matter of factly that, “I kind of impressed myself a little bit and thought ‘shit’ things are kind of all still there. I was worried about not having done it in so long whether I’d still be able to do it so I went in and had a crack on my own. “

Asking Dan about the songs he’d secretly and whether it was for old songs that he was familiar with or if it was new songs featured on their Vicious Lawless [2017] album which had Dan White on vocals. “It was a range of different stuff but all old stuff like “Dig” and “Monk”, the set that is going on now and a few of the newer ones and that was kinda it and then I sent that recording to them and said, “HEY DUDES, CHECK THIS OUT!” Dan says laughingly, continuing, “it all came around at a good time you know where Dan wasn’t happy being in the band and initially we just wanted to try it out. I wasn’t a hundred percent sure that I wanted to do it until we had a rehearsal and after we’d done that, that was when I went “SHIT! This is gonna be sick!”

On his thoughts of any hesitancies and potentiality for the outcome of McDougall’s endeavours, Dan matter of factly points out that, “doing all that stuff is great but then you gotta be able to connect in the room together and it is a completely different band, different drummer, different guitarist and different bass player, so me being the only person that I’d played with before was Azza [only original founding member and guitarist] so it might be old songs but it’s a completely different ball game, but that energy and connection was there without a doubt. The first time we had a jam together was like fuckin’ “Righto, this is gonna is gonna be cool and in some ways, it’s far superior!

But it’s also a weird situation to be in you know there’s this old band that’s been around for fucking ever but it’s a completely new band playing the old stuff and I’m curious to know what we’re gonna be able to come up with. We’ve got a new song out [“Coming Out Swinging”] which is a bit of an entree really but it’s nowhere near what this band can accomplish if we put our heads together and really knuckle down and write some new shit. Obviously, it’s gotta hold on to something that’s genuinely Frankenbok. It’s a new drummer and that makes a huge difference, new guitarist, a new everything so I’m curious to see what we can come up with and I think it’s gonna be a hybrid of the old and something new which we haven’t done before.”

So with Frankenbok almost being an entirely new beast, although having been an integral part and entity within the Australian heavy music scene Metal V asks McDougall for his thoughts on how he thinks Frankenbok will be able to ensure both fans of old and prospective new fans will take notice of them in 2019. “I dunno man. We haven’t really knuckled down in terms of writing new material. We’ve just been playing a bunch of shows and trying to find our feet there and obviously time’s a factor for us, we’re pretty stretched thin between trying to play shows and everything in our private lives and we’re getting older now, other shit just gets in the way you know so it’s a bit of a slow process.