It is hard to believe that the love affair between Australia and British rock outfit The Darkness has now been going on for sixteen years. Yes, it was way back in 2003 when Permission To Land hit Australia and shot up our charts. In a lot of ways the album was a game-changer seemingly winning over both the alternative and commercial sets while the band found comparisons to KISS while opening the door for bands like The Killers.

Now The Darkness are about to drop their sixth album, titled Easter Is Cancelled, and have just announced another Australian tour… which already has tickets selling as fast those traditional hot cakes that seem to be snapped up by everybody.

“It is always a pleasure, there is always something surreal about it,” says the band’s original bass guitarist Frankie Poullain as HEAVY Magazine chats to him amongst a heavy press schedule. “You are full of jetlag and everything but it still feels like you are coming back home when you get to play in front of an Australian audience. They just seem to be more tuned into our kind of rock music.”

As we keep talking about the band’s relationship with Australia and how they have managed to win over a legion of fans here you can tell by the way that Poullain talks that it is something that the band seems to be proud of but humbles them at the same time. “It is something that we probably take for granted,” he says in a heartfelt tone. “There is definitely something special about it. I think it is more that Australians have left what they saw as fashionable and now they just like what they see in front of them. They like what they see and the lyrics that they hear whereas with Europeans they are more about the media and what is in fashion.”

Fashionable or not Australia’s love for The Darkness seems to grow even stronger with each album so it is hardly a surprise that their latest album, Easter is Cancelled, has been so eagerly anticipated here. Poullain is quick to admit thought that the band had a bit of a different approach this time around. “We did things a little differently this time,” he says after a long pregnant pause. “This was probably the longest that we have ever spent in the studio. You are going to find that there are a lot of different styles on it this time and I would say you can describe it as baroque. When i say baroque I mean B-A-R-O-Q-U-E, it is ornate, it is dramatic and it details the journey of a guy who is travelling with personal relationships and just being on Earth and being in a rock band in 2019.”

Hearing that the band took so long in the studio this time I ask Poullain what took the most amount of time. “Well at one stage the track ‘Rock And Roll Deserves To Die’ was ten and a half minutes long,” he explains. ‘We kept going on different directions with it. We put ourselves under pressure to create something that would define our legacy. We were almost acting like this was going to be our last album which is probably kind of ridiculous but this is probably one of the most heartfelt albums that we’ve had. I think with the last album we weren’t quite happy with it, not quite satisfied with it. But this time we saw the nature of the times and decided actions speak louder than words.”

The band also approached the song-writing process differently and it seems like Poullain was really happy with the way it turned out. “There was no two songs that we did the same,” he says. “Some came from just jamming and trying out some riffs, then there would be others with really complex riffs.”

The fact that by the time the band roll around to Australia for their next tour that they will celebrating their twentieth anniversary together isn’t lost on Poullain either. “I guess we kind of had that six year period apart,” he says referring to the band’s hiatus from 2006 until 2011. “I guess the family thing really helps, sure there are the two brothers, but the whole band feels like a family… it is a family for a lot of us. I have to say though that we have never gotten on as well as we do now.”

Easter Is Cancelled is out now through Cooking Vinyl. 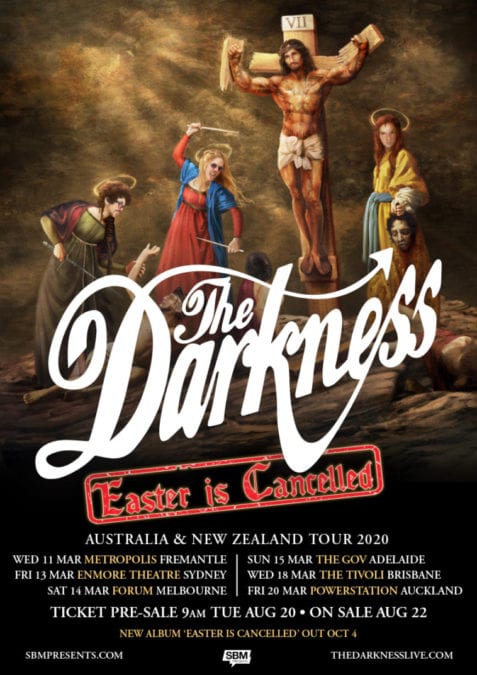