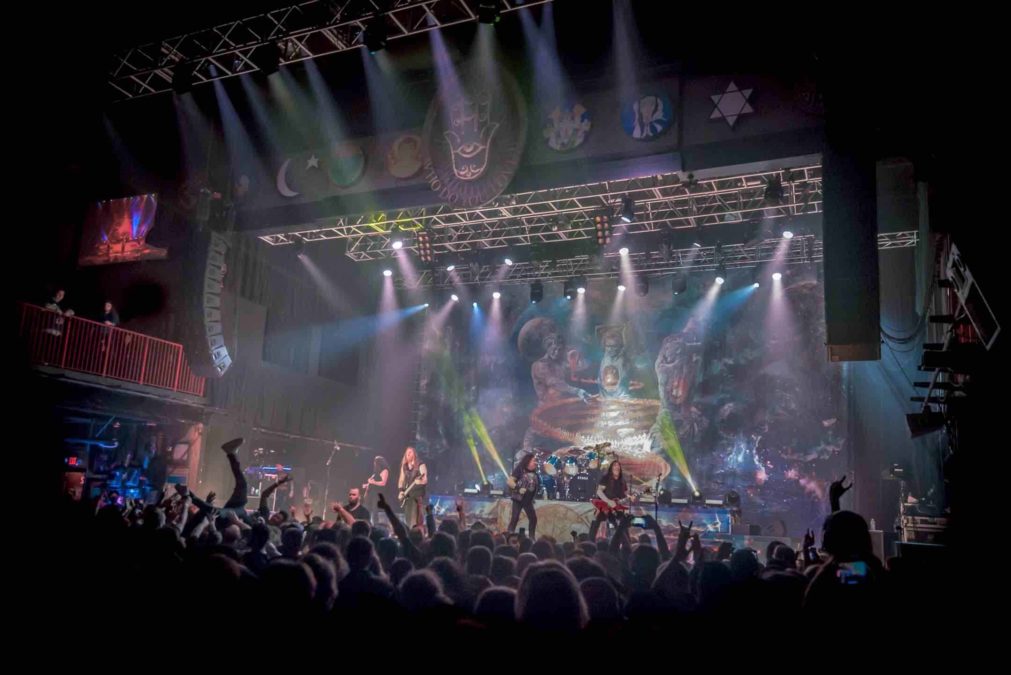 The world is only now beginning to open up again following over two years of global pandemic related restrictions and isolation.

Despite this being the case, live music has been one of the industries that has struggled, more than most, to relaunch and to begin operating in any kind of normal capacity.

Yes, there have been more live shows held over the course of the past several months and yes, many more concerts and festivals have been scheduled for later this year and beyond.

However, when one chooses to go to a concert these days more often than not, patrons are still met with smaller crowds and often rooms that lack the type of life that fuel the performers and their live performances along with it.

Which is why it was somewhat shocking that in Boston, Massachusetts this past week, the House of Blues may have hosted the most raucous and, quite frankly, joyous live show that the north-east has seen since COVID-19 wiped live music off the face of the planet back in early 2020.

The Bay Strikes Back tour, featuring West Coast thrash metal stalwarts Death Angel, Exodus and Testament, held what could be best described as a heavy metal and thrash oriented “love-in” in Boston.

Even though the performance took place on a Monday, in poor weather and was slated to start before many people got out of work for the day, the line to enter the House of Blues was around the block prior to the doors of the venue even opening.

Normally for a show with those types of negatives to overcome (early start time, early week and bad weather) you’d often be lucky to get even a half full venue by the time the second band took to the venue’s lighted stage.

Instead, the north east thrash metal crazies came out in full force early to ensure they heard every crunching riff, double bass line and piercing vocal from each and every last band on the evening’s bill.

Normally this would be the space where you’d learn about all the bells and whistles tied to the tour, a run down of what songs were played by each act and maybe learn even a little bit about what was said on stage by the band that went beyond the live music itself.

The fact is with the Bay Strikes Back tour stop in Boston there seemed to be only two things that mattered and two things only, the music and the fans, that’s it.

Set lists, stage banter and the technical specifications of the tour’s production values are simply not what the Bay Strikes Back is all about, which is playing thrash metal in a live setting for fans of the genre that have been oh so starved of it for several years running now.

One could easily tell that the fans and the constant energy they were spreading throughout the entirety of the venue had a noticeable impact on the bands while each performed on the House of Blues Boston’s stage.

Whether it was Death Angel, Exodus or Testament the sheer excitement from the audience constantly bleed into the performers on stage and in turn, each band seemed to crank it up a notch as their set lists moved forward and as each subsequent band played to the Boston crowd.

There weren’t any splashy technical accouterments to the show such as massive explosions, pyrotechnics or gargantuan life size monsters chasing band members around.

Instead, each performer on the Bay Strikes Back tour played with a simple band banner behind them, a decent but not over the top light production setup and with the type of unbridled enthusiasm that teenagers playing their first ever basement gig typical muster up knowing that some girls in their class might actually think that they’re cool now

Listen, there are many reasons to buy a ticket to the Bay Strikes Back tour when and if it rolls through your town

Should you be a true fan of metal, thrash and or live music, you probably don’t me or anyone else listing those reasons off one by one for you

What I can share about the tour is simply this, live music more than anything else is about reminding us about people, places and the moments that matter to us most in our own waking lives

For a few brief hours in Boston this past week Death Angel, Exodus and Testament brought a group of thousands of strangers together again to celebrate West Coast Thrash, live music, the metal community and the fact that we’re all now beginning to be allowed to enjoy each others’ company again after drifting apart for these oh so many months and years

If you need any more reasons to shell out a few bucks for a ticket to see the Bay Strikes Back tour this year, you probably either just don’t like live music, metal or both

In the event that turns out to be the true, I’ll be lining up Gary Holt to come wake you up around 3:00 AM in the morning on some random early Monday morning in the near future

Be warned, Gary will be bringing his guitars, his amps, the thrash and more than likely, a few of his metal friends along with him to serve as your larger than life and extremely loud alarm clock.

You should probably also know this ahead of time, thrash metal doesn’t have a snooze button