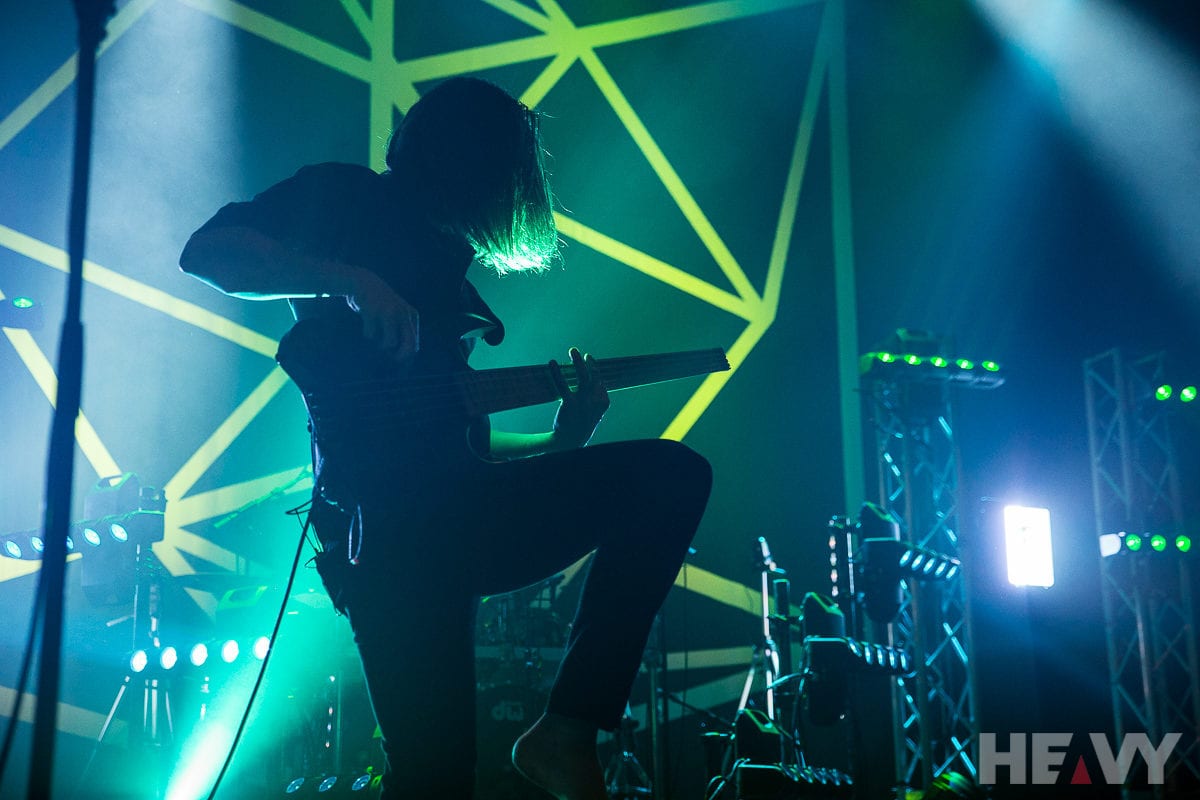 A banana, a hero roadie, and a pair of ‘very sweaty pants’…

…it turned out to be a very entertaining night. Saturday the 1st of December, at the O2 Shepherd’s Bush  Empire is where it all went down. A dreary London evening greeted me as I left the tube station and trudged across Shepherd’s Bush Green, a park that would usually be a lovely place to hang out, unfortunately through the darkness and rain, there wasn’t much to see – so I scurry towards the bright lights of the Edwardian style O2 theatre. ‘Tesseract – sold out’ spelled out in the lights, announcing all around that the little band prog band from Milton Keynes are still a force to be reckoned with. Said to be one of the pioneers of the djent movement, Tesseract have established a name for themselves, a reputation for mastery. Tonight’s showcase, will definitely provide a platform to express just why Metal Hammer called them prog metal’s chief scientists.

The night opens with Plini, Australian born composer, crazy trouser wearer, and self proclaimed fan of eating. Normally a solo artist, Plini brings with him a second guitarist and bassist, then borrows Tesseract’s drum tech to fill out their live stage line up. Although the opener for the evening, Plini hit straight out of the blocks, oozing with the confidence and professionalism you could expect from a headliner. Plini navigate their songs like surgeons of their instruments, their fingers worming up and down the fret boards in perfect unison, creating crystal clear melodies out of what could be a confusing auditory combination.

Lights bounce around the room, off the walls and off the bald heads bobbing in unison to the complicated yet cohesive grooves. Infectious beats from their opening rendition of ‘Cascade’ through to their closing of the set with ‘Paper Moon’. The musicians on stage are mainly stationary, choosing to remain focussed on their instrument rather than their physical performance, but I would still enjoy some kind of on-stage antics… Perhaps the metal gods heard my prayers? The roadie (who plays a major part in this story to come) walks on stage with a banana, mid song, and feeds it to the bass player, mid riff. Props to the bassist, for he missed not one note and topped up his potassium levels simultaneously. Front man Plini said very little throughout the evening, as his guitar did most of the talking for him, but a few key interactions with the audience appeared, notably when it came time to address the trouser situation as his ‘very sweaty pants*’ he especially saved for the London show.

My first time seeing these guys will not be my last time.

Between the Buried and Me

The ground starts to tremble, a new darkness approaches. Between the Buried and Me (BTBAM) begin their onslaught. Potentially one of the hardest bands to put in a single category, I wasn’t sure what the live show was going to bring. Incorporating a jazz fusion, prog style with virtually any instrument they can get their hands on, BTBAM certainly bring a unique presence to the stage. Led by their front man Tommy Giles Rogers Jr. BTBAM orchestrate a bewildering and surreal experience, their short set leaving room for only a handful of songs, each one eliciting a roar from the crowd, opening with ‘The Proverbial Bellow’ a track which weaves through a number of genres before the vocalist even joins the fray. At times the songs appear to be taking the listener in too many directions at once, a mixture of death metal blast beats and polyrhythmic piano loops, boggle the mind.

The crowd has certainly filled in by now, there’s standing room only in the aisles, and the sticky floor space heaving with transfixed patrons.

The sound mix does seem to favour the drums, leaving a lot of their intricate key and guitar melodies to the imagination of those who truly know the songs. This doesn’t detract from the performance however, Rogers’ transitioning from his keyboard out to the audience and in between his bandmates with natural charisma.

BTBAM signal their last song, Rogers calling it out ‘Voice of Tresspass’, seemingly to the delight of everyone in the standing room. The jazzy, ragtime, almost Primus feeling song wrings the last millimeter of energy from the crowd before dropping the breakdown, heavier than that big Australian cow.

I can immediately tell how fanatical the fan-base is – the band hasn’t even come on yet, but a raise of their banner on stage just threw Tesseract fans into a frenzy. There’s an ominous tension in the air, I notice a lack of house music, just a whisper of something in the background subconsciously building tension. Encapsulating their professionalism, Tesseract treat the whole evening as one flowing story, the scene is set and the moment is ready. The five members, led by vocalist Daniel Tompkins, appear on stage and rip straight into ‘Luminary’ from their latest studio release ‘Sonder’. Some of the catchiest guitar riffs combined with potentially the tightest sound engineering leaves the crowd begging for more. Each note from the dual guitars piercing through crystal clear, with the earth shattering bass rumbling through the seats.

Tompkins is a natural on stage, commanding the crowd to his every whim, losing himself in the music, flowing across the stage in near choreographed fidelity. Tesseract weave together songs from their large back catalogue into the set, seamlessly bridging between ‘Polaris/Errai’, ‘Sonder’, ‘One’, and ‘Altered State’. The tracks sit eloquently next to each other – framed in between with some short, yet meaningful mentions ‘thanks to the other bands’ and talk of their previous tour with Polaris, showed their humble side and value on their peers.

At no point during the evening is the energy lost. Songs from the classic ‘Concealing Fate’ saga, see Tompkins launching himself into the crowd, where our roadie from earlier, does his best to keep the lead vocalist from being swept away by the enamoured crowd moshing and dancing like a people possessed. Not only once, but at every chance he gets, Tompkins is with the crowd. But our heroes  job is far from over. About one third through the set, the tallest guitarist I’ve ever seen, James ‘Metal’ Monteith, must have looked dangerously thirsty, our hero to the rescue, a beer in hand letting Monteith drink without putting the guitar down. Cooperation like you would see in a high end boxing match, with Monteith not dropping one note, while the coach prepares him for the next round.

The crowd open a pit at every opportunity, shifting and pulsating at the mercy of the speakers, capitalising on the dynamic song structures and powerful sonic composition from the true djent masters. The lights explode and transform across warm hues, matching the music with purpose, bringing together the whole sonic and visual experience.

Closing the night with a brutal rendition of ‘Acceptance – Concealing Fate, Pt 1’ the boys wave and signal goodbye and good night, with no encore. A classy way to end a high quality show without cheapening the night like an ill-placed encore can.

Tesseract, at the Shepherds Bush O2 Empire was a night to remember, crushing and brutal, but at the same time heartfelt and harmonic. Tonight they confirmed their prestige, Tesseract are at the strongest point yet.

* ‘Pants’ in Australian means trousers, and hilariously means underpants in the UK

PrevPrevious.METAL CHURCH ‘Damned If You Do’
Next.KAMELOT and Valhalore at Manning Bar, Sydney on 7/12/18Next